Eminem made it clear to his fans — they need to make a choice.

The rapper said that he’s ‘drawn a line in the sand’ and either you’re a supporter of President Trump, or you’re his fan — you have to choose.  He has a message for those that voted for Trump, ‘F**k You!’ with his middle finger raised.  If that wasn’t clear, he shouts, ‘We hate Trump!’

Eminem’s ‘freestyle’ was an on-going anti-Trump rap with seemingly never-ending criticisms of President Trump, his policies, and those that dared vote for him.

Before we begin, here’s a thought:

Isn’t it weird that none of these Social Justice Warriors on the Left — Eminem’s ‘allies’ — have called him out on the ‘cultural appropriation’ of rap to make himself rich?

The FULL verse that EVERYBODY is talking about! @eminem BODIED THIS! #HipHopAwards pic.twitter.com/zoS0wEwjQF

Eminem is saying that Trump is racist.

President Trump didn’t side with the white supremacists in Charlottesville — to paraphrase the President there are garbage people on both sides.  Both sides.

Just like all the others accusing the President of being racist, Eminem doesn’t give a single piece of evidence that proves his accusation while he continues to assert it as fact.

And you already know that there are so many celebrities that are concerned about President Donald J. Trump. 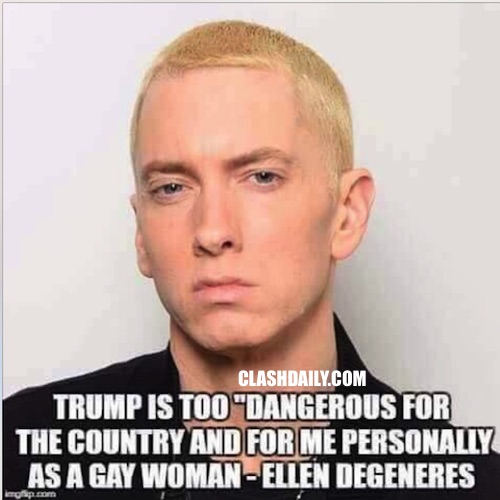 Don’t you love the part where Eminem, mocks the south with a fake Southern accent to discuss what he calls racism?  (Those of us on the right call it ‘national sovereignty’.)

Gee, was Eminem a fan of the late Tom Petty?

In the MTV documentary Southern Accents, Petty says that what was revealed in his travels is that people with southern accents are viewed as stupid, so he tried to capture that in his song of the same name:

Isn’t that same discrimination on display with Eminem here?

Eminem is just displaying his own ignorant bias of Southerners.

But hey, look who appreciates him:

I appreciate you @Eminem ✊???? pic.twitter.com/nwavBwsOkQ

Don’t worry, there are others out there getting their voice out, like Candace Owens aka Red Pill Black, whose video criticizing that racism is alive and rampant in the United States went viral.

She has another video out that Eminem should take note of:  (LANGUAGE WARNING)