While the NFL players are engaged in their Kaepernick-style slacktivism, one NHL superstar is actually addressing the problem.

Anyone who has followed PK Subban’s career will not be surprised by this.

PK is the guy who pledged $10Million to a children’s hospital in the city he was playing in. And even though he’s since been traded to another city — country, actually — he’s honored his word.

This guy puts his money where his mouth is. And that’s why, when he got traded to an American Franchise (traded from Montreal), it came as no surprise that he would keep looking for ways to make his city better.

It’s why he was given Canada’s highest civilian honor — the Order Of Canada. 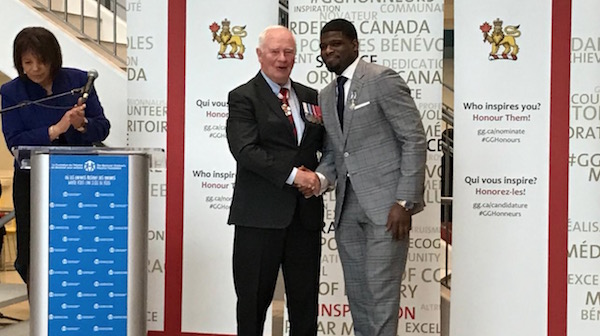 So, while Kaepernick is actively funding groups that ratchet up racial tensions, divisions, and mistrust, including one inspired by an actual cop-killer, PK Subban is going a different direction.

During every Nashville Predators home game this season, Subban will host his new P.K.’s Blueline Buddies program, bringing together a member of the Metro Nashville Police Department and their guest with a mentor or representative from a local organization and an underprivileged youth.

Subban takes care of the game tickets, dinner and meets with the group prior to and after the game to lift their spirits and give them a few hours to forget about everything on the outside.

Now in his second NHL season as a resident of the United States, Subban sees the news. He knew he wanted to do something, anything to try and make a difference. And now he’s doing just that.

“I think it’s important for athletes to set a tone in a way that we’re looking to build bridges,” Subban said. “That doesn’t take away from anybody’s right to do what they want to do or how they want to exercise their rights as an American citizen, but I think it’s really important for us to be role models in terms of building bridges and being a part of the solution to social issues and different things that go on in our community.”

Subban, who says one of his best friends is a police officer, believes youth and law enforcement building a rapport with one another is vital, and that’s exactly what he’s aiming to accomplish with the program.

“Our law enforcement, these are people that leave their houses and may not come back home at the end of the night,” Subban said. “That’s the job that they have, so to make them feel good, and to also be able to help underprivileged youth that don’t get an opportunity like everyone else, that come from broken homes, it’s a win-win.”

Building bridges in the community? Hey, that’s E Pluribus Unum talk! We love it! A welcome change from division and identity politics!

Which one do YOU think will make for better communities?

When all those posers in the NFL were ‘taking a knee’ … PK Subban stepped up.

Too bad Roger Goodell doesn’t have that kind of commitment to a cause. He suddenly cares about honoring the Anthem? He showed up late to the party… only to discover everyone else is putting on their jackets and headed home.

Good luck with that league of yours, Rog. You’re gonna need it.

Facts You Probably Don’t Know About Jerusalem
May 6th, 2021 The Lid