Un-freaking-believable. The perpetually outraged will ALWAYS find a reason to be outraged.

The outrage is now over an Instagram photo posted by former-Playmate Kendra Wilkinson.

Wilkinson was traveling to visit family for Thanksgiving.

She took a video of herself stopping to pick cotton and shared it on the social media platform.

‘I’ve always wanted to pick a piece of cotton but I’m probably going to get shot doing it,’ the ex Playboy pinup, 32, joked on camera. 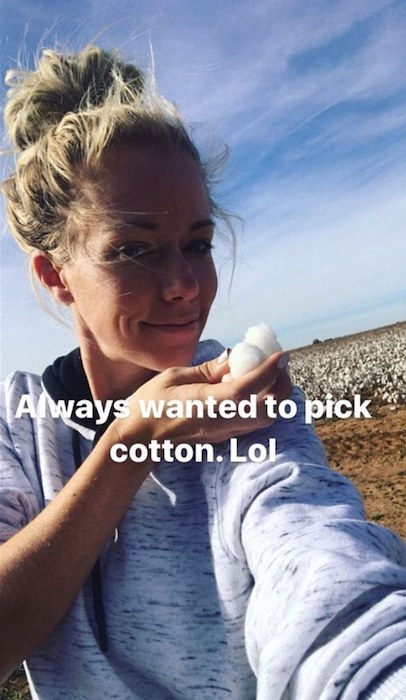 She was egged on by her brother-in-law and her husband, Hank Baskett.

(Is it here that we mention that her husband happens to be black?)

When she says she’s always wanted to pick cotton, her husband and brother-in-law egg her on.

‘This is probably the most illegal thing I have done in my life,’ she says as she gets out of the vehicle and trespasses on the farmland.

She walks across the field to the plants and exclaims: ‘Oh my gosh, look at that, it’s real cotton.’
She plucks a white fluffy ball and excitedly says: ‘I picked cotton!’

She picks a few more pieces of the white fluffy bulbs and then poses with them for the camera.

As you can imagine, it didn’t go over well.

She instantly attracted comment on her Twitter feed from folks who thought she was racist because of the link between cotton-picking in the South and slavery.

She retorted by tweeting that she was ‘baffled at the accusations’ because she is married to a black man Hank Baskett and is spending time with her ‘black father-in-law’ for the holidays.
Source: Daily Mail

Here is the photo Kendra posted of her father-in-law: 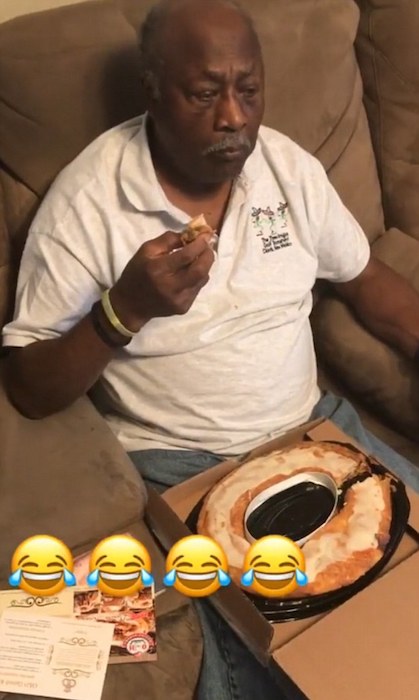 Here’s a photo of Kendra with her daughter: 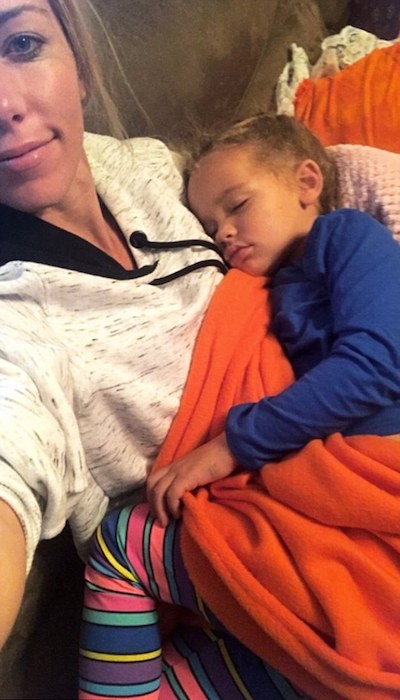 Do you think that those pics will stop the people shouting ‘RACIST!’?

Well, Kendra, welcome to the land of the perpetually outraged.

They don’t care about your intentions.

They don’t care about your own personal history.

They judge your actions through their own lens where everything is racist.

Wilkinson said that she was just having fun and wanted to know what cotton felt like straight from the plant.

Check out some of the hate that she was subjected to after she said her father-in-law is black: 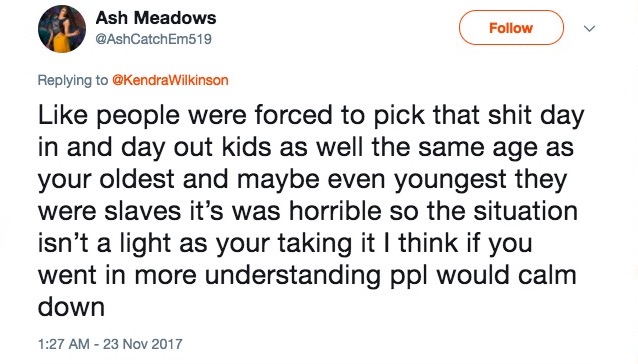 Oh, dear!  How can she atone for her sins?

And this weird one that said her husband wasn’t ‘black enough’ and should have ‘checked her ass’. (Is it because his mother is white?)  Interesting play — saying that mixed people are ‘less than’ and don’t fit into either group, as well as suggesting that Kendra should run all her thoughts by the man in her life first.  ‘Cause women are probably dumb or something.

Clearly, the emoji is the only thinking being done in this tweet. 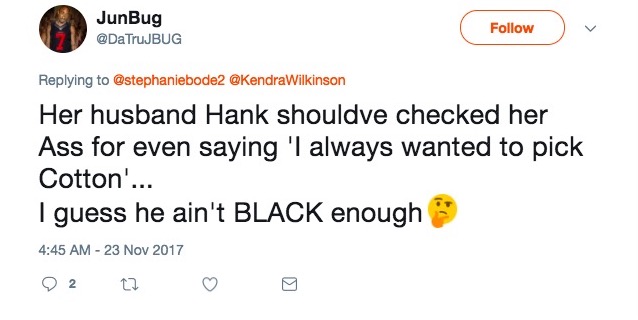 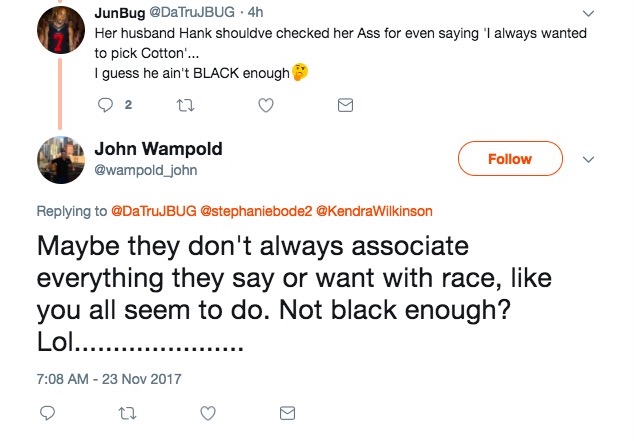 Here are some of her response tweets: 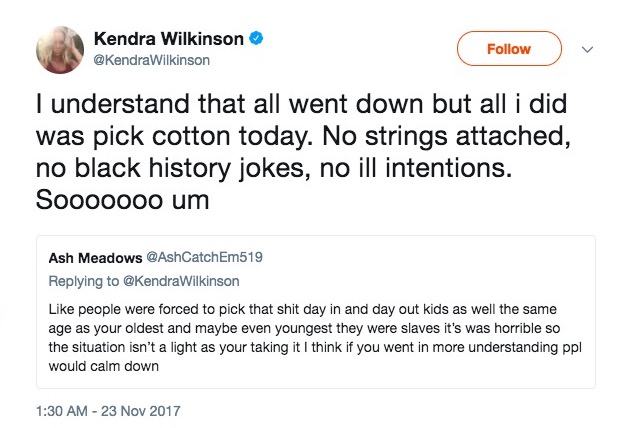 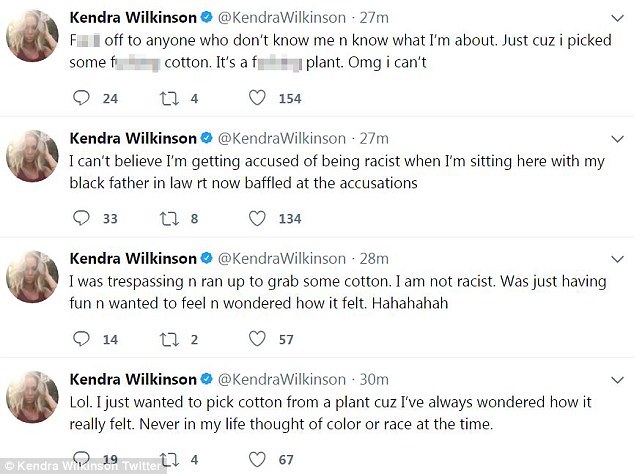 Fortunately, there were a lot of people on Twitter defending her and calling out this B.S. 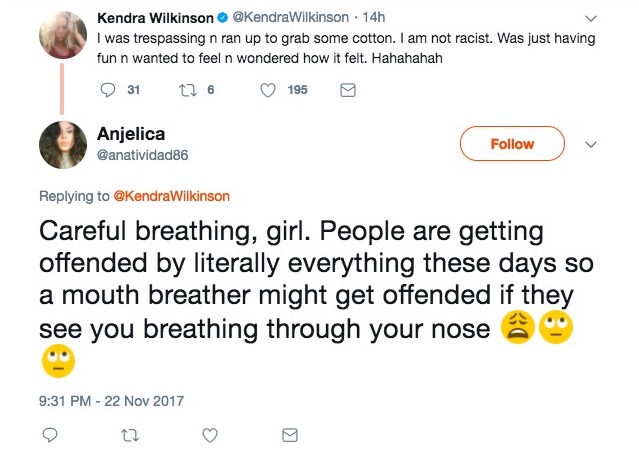 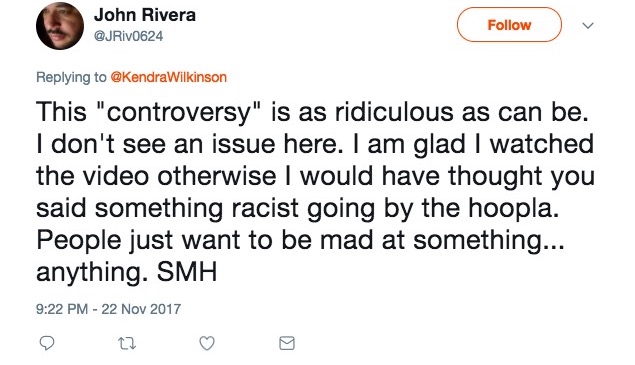 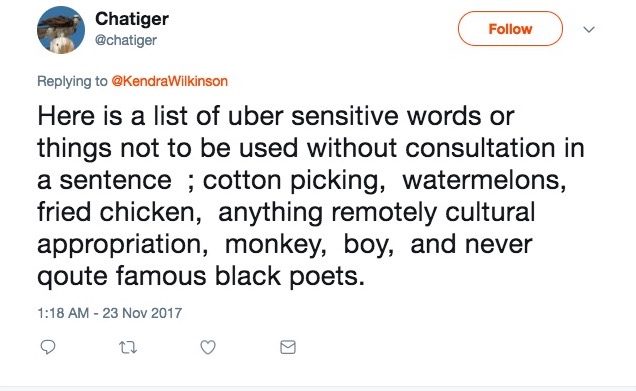 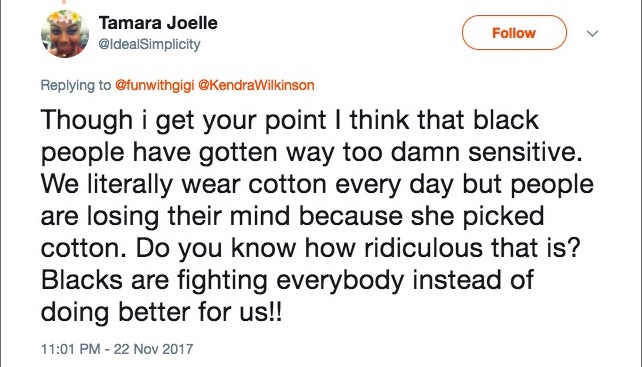 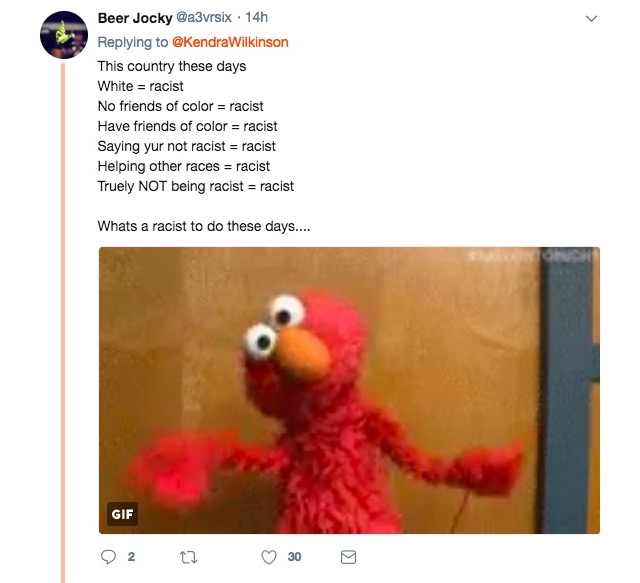 And there was some astute commentary, as well:

(See what I did there?  I used race-baiter Obama’s mic drop gif in an article about a ridiculous claim of racism!)

Kendra Wilkinson defended herself from the B.S. she was subjected to.

These days, that makes her a badass.

It’s hard to stand your ground around these race-baiters. ‘Identity politics’ is divisive and corrosive, and it’s found on the left where people are grouped together by external attributes instead of viewed as individuals.