She was pretty proud of her old man. It didn’t take long for people to set her straight.

She got mocked. Badly.

One quick aside, before we get into it. With Social Media, it’s sometimes hard to tell the difference between an authentic personality, and a proxy, fan, or parody account. Is this one really Sasha, or someone just hijacking her name?

Giving credibility the account being ‘legit’ — the photos of Obama, and the intensely partisan pro-Dem, anti-Trump theme of the page.

On the ‘sketchy’ side — its politics only, nothing else — and the twitter account that’s supposedly connected to it is a dud. Could it be a ‘secondary’ account? Or could the Twitter just not be used? Maybe. But we’re guessing it’s not actually hers.

Because, unlike some of the ‘credible’ news sources, we actually CARE about our reputation, that’s the full disclosure.

We’ll leave it to you to make your own mind if she’s real or Memorex. And now back to the story. 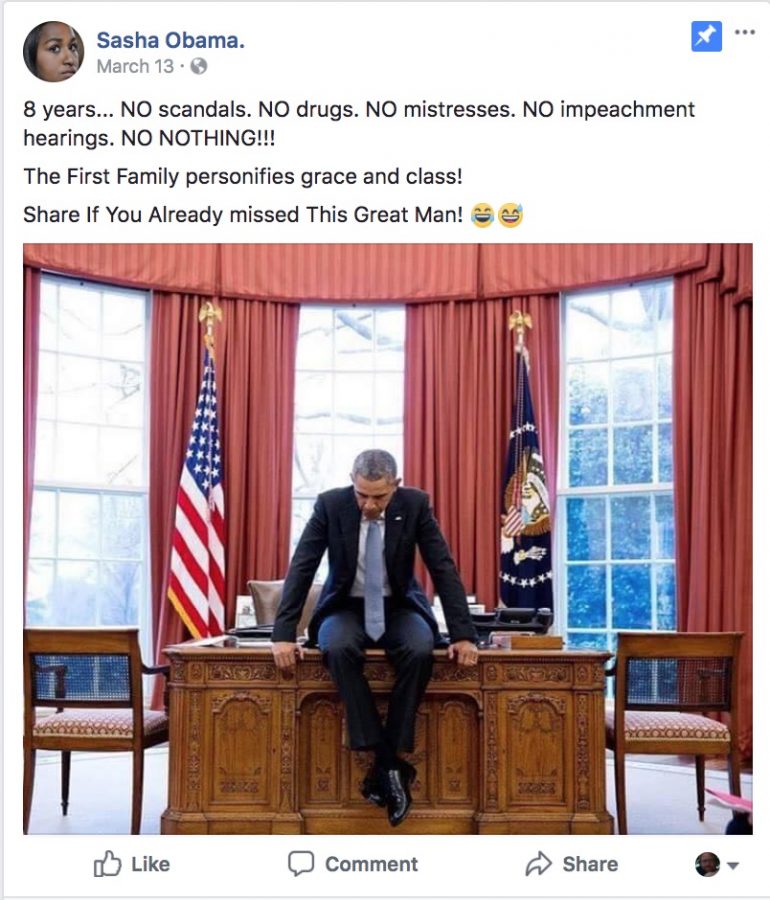 8 years… NO scandals. NO drugs. NO mistresses. NO impeachment hearings. NO NOTHING!!!
The First Family personifies grace and class!
Share If You Already missed This Great Man! ????????

It’s hardly an original idea — Obama himself made the same outlandish claim. 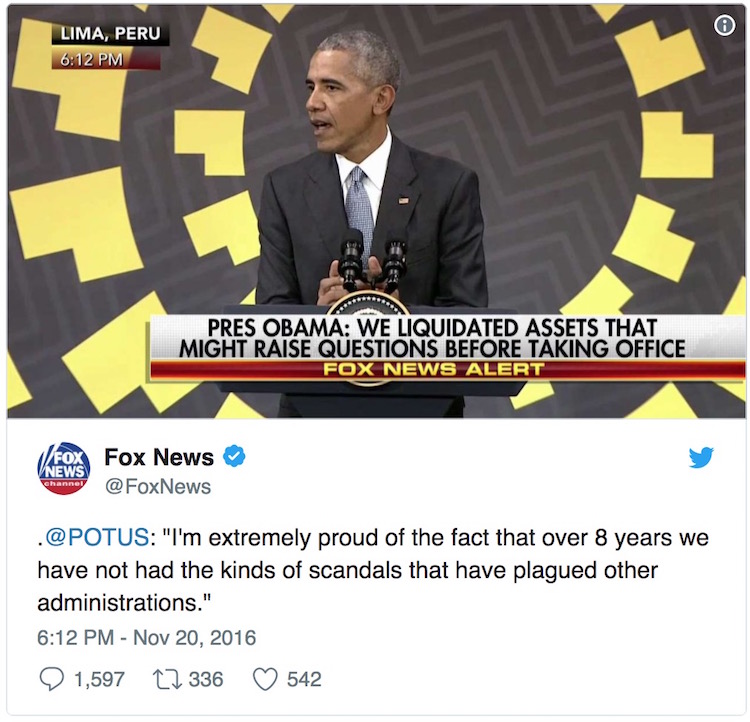 Related story:
REALITY CHECK: Obama BRAGS About His ‘SCANDAL-FREE’ Administration — What About THESE?

Here are some of the responses:

Thomas Drake No scandals? Are you living in a cave? Solyndra, Bengazi, IRS targeting conservatives, Fast and furious, and of course we’re yet to uncover the spying on citizens and the Trump transition team. That’s just a few, all worthy of impeachment…. But of course you would never acknowledge any of it.
LikeShow more reactions · Reply · 2.2K · April 8 at 1:24pm

Ramona Austin Monty Johnson—He and Hillary stood on the tarmac among caskets holding dead Americans and their devastated families and continued to tell the lies about a video which was also in an email to Chelsea Clinton. As the granddaughter, daughter, and wife of combat veterans from WWI, WWII, Korea, and Vietnam, that is unforgivable, cruel, and morally apprehensible. One mother only had one child and is now alone, and ridiculed and lied to by those who caused it in an attempt to cover an arms agreement. They will be judged and face the consequences one day, and the corrupt media, and money will have no influence.
There are none so blind as those who will not see.????????
LikeShow more reactions · Reply · Yesterday at 9:03am

Debt? Yeah, that’s an issue. So was all that race-baiting. He couldn’t even go to a police funeral without screaming racism.

Oh, and didja know they lived ‘in a house built by slaves?’ Michelle may have mentioned that a few dozen times. There was even some ‘playful’ banter tucked in there.

Ralph Langer Hillary would have finished the job
Like · Reply · July 16 at 3:47pm

Greg Elliff If Hillary could finish a job, Bill wouldn’t have needed Monica Lewinsky.
Like · Reply · 9 · July 16 at 3:58pm

But back to the scandals.

Greg Elliff ….and yet, another “tolerant” liberal, who doesn’t know her facts, but loves calling people names.
Obama started the Libyan war, and now Libya is in ruins.
Obama started the Syrian war.
And, Obama started the Egyptian revolution, which handed control of their government over to the Muslim Brotherhood. Luckily, they were able to take back control of their own country. Obama is still listed as a War Criminal in Egypt, and isn’t allowed into their country. Why don’t YOU try watching something other than MSNBC.
Like · Reply · 4 · October 22 at 10:35am · Edited

No really. We couldn’t even make something that dumb up.

This isn’t a scandal, so much as an assessment of his moral failings.

Bill Yarbrough No respect, no honor, no patriotism, no common sense, no leadership skills!! But plenty of chaos and just an all around asshole!!!
Like · Reply · 1.8K · March 16 at 11:37am · Edited

And those comments barely scratched the surface of OUR list… a list that was compiled before we knew Russia was trying to bribe it’s way into gaining access to Uranium.

That was also before we saw this headline.

What about the Tarmac Meeting that even Comey had ‘issues’ with?

Hey Pavlov — any of these ringing a bell? Does it take special classes for liberal hacks to become this dumb?