There aren’t that many people that still watch CNN, so it’s little surprise that it took a week and a half for anyone to notice this story.

Remember when Sean Spicer said that if the President said he’d had ‘Russian dressing’ on his salad the Media (D) would report it as ‘Russian collusion’?

CNN reported on Russian Salad dressing as a ‘fact check’ on Sean Spicer.

And then there was ‘Ice Cream Gate’.  The President — horror of horrors — got two scoops of ice cream when everyone else gets one.

CNN reported on this, too.
The previous bit of ‘Fake News’ was the misleading reporting on President Trump’s rather innocuous moment feeding koi in Japan.

But this latest report is pretty low even according to the low ‘standards’ at CNN.

CNN has reported that a dog named Chief has an ear infection that makes the inside of his ear look like the face of President Trump.

There’s an old saying that ‘all news is local’, but… uh… this dog is from England.

So much for even getting that right. 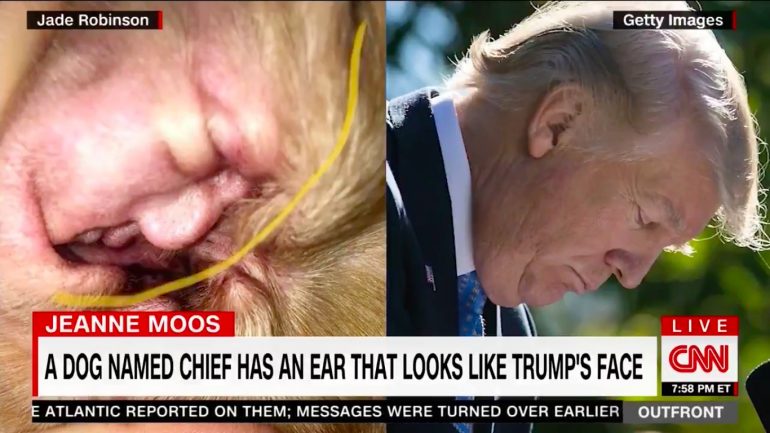 ‘Is it an infection?  What is it in the ear that looks like Donald Trump?‘ Jeanne Moos asks with all seriousness.

Jeanne Moos has reported on President Trump’s ‘Rocket Man’ comment while trolling the President with a Troll doll.

What a sad, sad life.

But at least she’s on CNN, right?  She’s got an audience of tens — maybe even dozens.

Perhaps if CNN focused on REAL news stories instead of this nonsense, they’d be taken more seriously.

There has been little to no coverage of the Russian collusion with the Democrats.

As a matter of fact, CNN’s Chris Cuomo has said that the claim is ‘preposterous‘ and ‘a notion that doesn’t meet any standard or any piece of proof that we’ve gotten from investigators to date’.

Cuomo in another dismissal said that it was a ‘political spitball contest‘ to investigate any possible Hillary-Russia connection.

And speaking of ‘preposterous’, CNN’s Senior Legal Analyst, Jeffrey Toobin, said that the call to investigate Hillary and the Democrats possibly colluding with Russia is because ‘Fox News now runs the Justice Department‘ and ‘this is what happens in authoritarian countries like Turkey and Russia‘.

Meanwhile, the entire Media (D) including CNN, is fixated on Trump-Russia looking for a smoking gun while the bodies lay all over the floor in Hillary’s camp.  (Oh, is that a poor choice of words considering the ‘Clinton Body Count’?)

Of course, the Clinton camp doesn’t even need to hide the bodies, CNN will do it for them. Look at how they touted Barry’s ‘Scandal-free’ Administration.

Let’s just remind CNN what they really are:

You can say you’re not…

But, we all know the truth:

CNN is an embarrassment. A disgrace.

CNN has been called everything from the Clinton News Network to the Communist News Network for obvious reasons. No matter what the letters stand for, this network is clearly a Left-wing propaganda machine.

This new t-shirt says it all… CNN Sucks!

If someone on your gift list agrees, your shopping just got easier.

Give them a way to mock the Fake Media wherever they might happen to go.

You do know why CNN sucks, don’t you?

It’s because they haven’t read this: