Did Chelsea forget that the internet is forever?

The internet is wonderful — you can use it to learn all sorts of information like I did with my Google search in November of 2016: ‘Who is Chelsea Handler?’

Having recently learned who Chelsea Handler is, I wish that I could go back to those good ol’ days of ignorance.

The newfound knowledge is making me lose faith in humanity.  Handler is a foul-mouthed, boob-flashing, sex-positive feminist (aka:  trollop) that brags about her two abortions at 16 years old and that she is still single at 42 and living The Good Life.

But all of that material available on the internet can also be saved and shared by anyone, so stupid actions can be replayed over and over again. 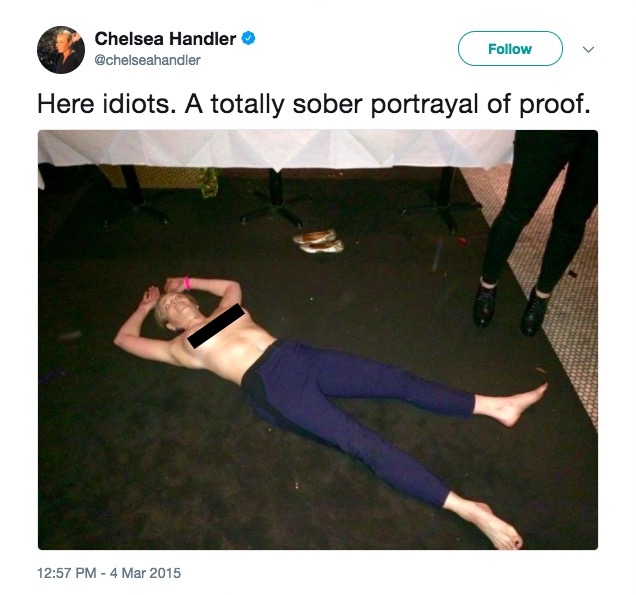 Of course, Handler posted the uncensored version.  She posts a lot of photos of her ta-tas, it seems.

Chelsea Handler had said that she was going to take her lonely, leftist self out of the country and move to Spain if Donald Trump won the presidency.

Her ‘resistance’ is pretty deplorable if you ask me.

She recently attacked Sarah Huckabee Sanders for how she looked, and it was pretty disgusting.

You’d think she’d remember what she’d said on her show about being bold and do what you want to do:

As an über-feminist you’d think that she wouldn’t mock a woman’s style and how she chooses to present herself to the world. Isn’t it ‘Her Body, Her Choice’? Or does that not count for fashion and makeup, but only to ripping unborn children from the womb?

Here’s the nasty attack on the White House Press Secretary:

Is it ‘slut-shaming’ if the person targeted is a young mother of two that is devoutly religious and there is no evidence of her actually being a slut?

Is it ‘slut-shaming’ if the person doing the shaming brags about abortions, how many men she’s been with, and is forever posting photos of herself topless? ‘Cause she’s the slut doing the shaming.

You’d think she’d approve of a female Press Secretary.  She was one of the ‘I’m With Her’ crowd.

But after her low blow attacking Sarah Huckabee Sanders for her ‘Harlot’ looks and her ‘summer whore lipstick’, James Woods, one of the bright lights on Twitter, posted this pretty vile video of Jason Biggs allegedly peeing on Chelsea’s face:

Remember the class act that Ms. Handler is:

James Woods got it just right.

She is a literal ‘pottymouth’.