On a busy Monday morning commute, an explosion was felt in a subway station near Times Square.

*update* Sources described as ‘high-ranking’ from within the police department have identified the suspect as Akayed Ullah.*end update*

The attacker is already in custody, after what is said to have been a case of premature detonation.

The suspected bomber – a 27-year-old who lived in Brooklyn – had wires attached to him and was armed with a five-inch metal pipe bomb and battery pack as he walked through the Manhattan transit hub, sources said.

The man partially detonated the device, which he was carrying in the right side of his jacket, prematurely inside the passageway to the A, C, and E trains at 8th Avenue and W. 42ndStreet at around 7:40 a.m., sources said.

Update: A total of 4 injuries reported at the scene of an explosion at Port Authority. All injuries are non-life-threatening

There are reports of a terror attack in New York City, after an explosion was felt Monday morning in a Subway station near Times Square.

Commuters said they felt a blast in the Subway tunnels underneath the Port Authority Bus Terminal around 7:30am. The bus terminal is a major transit hub for people commuting to and from New Jersey by bus, and is located just a block from Times Square.

Police have taken one man into custody, who was carrying a pipe bomb with a battery back, a source told the New York Post. He was injured when the bomb malfunctioned, but is alive and in stable condition, according to the FDNY.

The NYPD said that so far, it appears that just the suspect was injured.

Watch the moment the bomb goes off:

The NYPD and the Fire Department are all over the place right now:

CNN reports that it appears the Subway was not the intended target of the pipe bomb, and that it may have went off prematurely.

They also learned that the device was homemade and could have caused catastrophic damage if it went off as intended.

Law enforcement agencies have responded to the scene and have set up a perimeter around the area.

The entire Port Authority Bus Terminal has been shut down, as well as the subway station underneath it.
Source: DailyMail

Reports are also saying that this was, in fact, a terrorist incident, explicitly done in the name of ISIS.

This, naturally, has people recollecting a threat made in the name of ISIS against international landmarks, including New York: 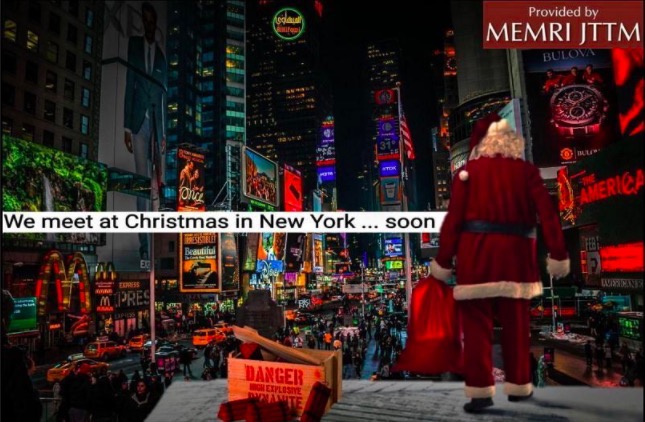 Again, we are pleased to report that there are no fatalities associated with this incident.