This sure changes the immigrants are ‘financial net gain to society’ argument. And these numbers don’t even account for State or County jails!

The left, in their pious tones, loves to ‘explain’ just how wrong we are to question the effect of Illegal aliens.

We are expected to accept — unchallenged — their claims that all of these ‘undocumented immigrants’ or ‘dreamers’ (the legal term is still illegal alien) are a net benefit to society.

But have the numbers truly borne that out? 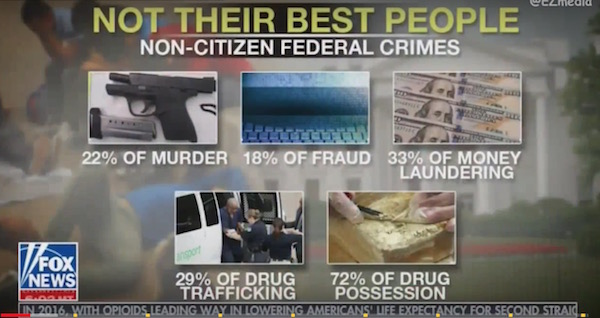 We finally have some hard data. Tucker hit this issue in his opening monologue.

(His first two interviews, covered the same issue too. The first one was an immigration advocate, and predictably painful. The second was Mark Steyn.)

‘Shockingly’ we weren’t recording the numbers for a long time. Any guesses what could possibly have motivated that ‘oversight’?

Here are those numbers:

The 2017 report, from the Departments of Justice and Homeland Security, found that more than one in five individuals imprisoned were not born in the United States. In addition, 94 percent of foreign nationals in the custody of either the Federal Bureau of Prisons or the U.S. Marshals Service entered the U.S. illegally.

Sessions said in a statement that Americans “are being victimized by illegal aliens who commit crimes. … The simple fact is that any offense committed by a criminal alien is ultimately preventable. One victim is too many.”

The attorney general also noted that, based on sentencing data, “non-citizens commit a substantially disproportionate number of drug-related offenses, which contributes to our national drug abuse crisis.”
Source: FoxNews

America’s incarceration rate is held up by the Left as a national blight, and subjected to international scorn.

We are scolded for ‘overcrowding’ and the ‘racial inequality’ in the prison system. We are criticized for the huge cost of maintaining the prisons. But look who they are getting filled up with… people who don’t even belong here in the first place!

It’s all those good buddies of the left to whom ‘Sanctuary cities’ are hell-bent on giving shelter and comfort.

How much money could we put back into, say, infrastructure, or Social Programs if one in five of our Federal Inmates were not ‘problem citizens’ (or, if you prefer, ‘bad hombres’) we had inherited from some other sucky country?

What do you suppose would happen to the statistics of our ‘racialized’ prison system — the one those dopes in the NFL are protesting — if we didn’t include the foreign nationals who have no business even being here?

How ironic would it be if the Dreamers managed to kill the NFL — one of the few things that used to bring us all together?

But then again, it’s the leftist agenda. You weren’t expecting it to make sense, were you?