The UN cobbled together an ’emergency session’ to condemn the Trump administration’s decision to enforce existing law regarding the recognition of Jerusalem as the capital of Israel.

All the anti-Semites in the U.N. slithered out from their dark, dank hell-holes to ‘take a stand’ against the United States moving their Embassy in Israel from Tel Aviv to Jerusalem.

In an emergency session, the United Nations voted overwhelmingly Thursday to condemn the U.S. for recognizing Jerusalem as the capital of Israel and pledging to relocate its embassy there.

The vote was 128–9, with 35 abstentions. Only Guatemala, Honduras, the Marshall Islands, Micronesia, Nauru, Palau and Togo joined the United States and Israel in opposing the measure. Another 21 countries didn’t show up to vote.

The resolution is symbolic and nonbinding, and won’t likely change President Donald Trump‘s course of action. But it declared that ‘any decisions and actions which purport to have altered the character, status or demographic composition of the Holy City of Jerusalem have no legal effect, are null and void and must be rescinded.’
Source:  Daily Mail

The decision to not recognize Jerusalem as the capital of Israel — which it has always been — is literally to side with terrorists.

If y0u’re not up to speed on Trump being the President that is actually doing what he said he’d do regarding Jerusalem, read the following related ClashDaily articles:

Our Ambassador to the United Nations has been pretty clear that she is frustrated with the anti-Israeli bias at the international body.  She posted this badass tweet when the ’emergency session’ was called:

At the UN we're always asked to do more & give more. So, when we make a decision, at the will of the American ppl, abt where to locate OUR embassy, we don't expect those we've helped to target us. On Thurs there'll be a vote criticizing our choice. The US will be taking names. pic.twitter.com/ZsusB8Hqt4

This photo is a perfect example of a strong, woman.  The left hates it, though.   They don’t like strong conservative women.

The Five had a fantastic take on the vote that was still upcoming:

Here is the full text of the Resolution:

Reaffirming its relevant resolutions, including resolution 72/15 of 30 November 2017 on Jerusalem,

Guided by the purposes and principles of the Charter of the United Nations, and reaffirming, inter alia, the inadmissibility of the acquisition of territory by force,

Bearing in mind the specific status of the Holy City of Jerusalem and, in particular, the need for the protection and preservation of the unique spiritual, religious and cultural dimensions of the city, as foreseen in relevant United Nations resolutions,

Stressing that Jerusalem is a final status issue to be resolved through negotiations in line with relevant United Nations resolutions,

Expressing, in this regard, its deep regret at recent decisions concerning the status of Jerusalem,

Affirms that any decisions and actions which purport to have altered the character, status or demographic composition of the Holy City of Jerusalem have no legal effect, are null and void and must be rescinded in compliance with relevant resolutions of the Security Council, and in this regard calls upon all States to refrain from the establishment of diplomatic missions in the Holy City of Jerusalem, pursuant to Security Council resolution 478 (1980);
Demands that all States comply with Security Council resolutions regarding the Holy City of Jerusalem, and not recognize any actions or measures contrary to those resolutions;
Reiterates its call for the reversal of the negative trends on the ground that are imperilling the two-State solution and for the intensification and acceleration of international and regional efforts and support aimed at achieving, without delay, a comprehensive, just and lasting peace in the Middle East on the basis of the relevant United Nations resolutions, the Madrid terms of reference, including the principle of land for peace, the Arab Peace Initiative[1] and the Quartet road map,[2] and an end to the Israeli occupation that began in 1967;
Decides to adjourn the tenth emergency special session temporarily and to authorize the President of the General Assembly at its most recent session to resume its meeting upon request from Member States.

Here are how the votes stacked up: 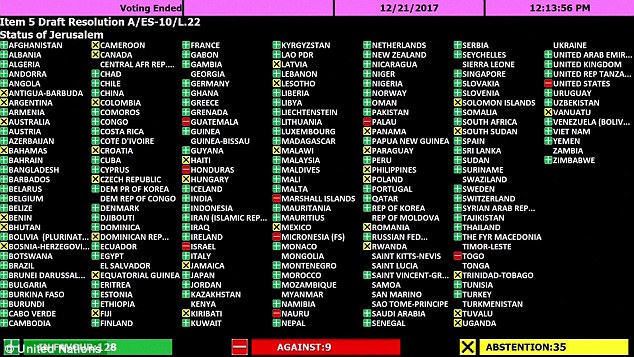 That’s pretty hard to read, so here’s a list of the countries that abstained or voted against the resolution.

These are the mealy-mouthed wussified ditherers that refuse to stand up for the rights of a sovereign state to choose the location of their embassy. (‘Cause you wouldn’t want to anger the Muslims and ‘side with the Jews’, I guess.) I mean — the countries that abstained:

Those that voted against the resolution:

This decision by the Trump Administration forced CNN to report the truth.

Watch a stunning moment where Jake Tapper is actually reporting with proper context:

Among the 128 countries that voted in favor of the UN resolution condemning the US decision to move the Israeli embassy to Jerusalem were "some countries with some rather questionable records of their own," says CNN's @jaketapper https://t.co/P3djp0ExQi pic.twitter.com/ZvDnnzsSoK

The United Nations consistently sides against Israel, the lone democracy in the Middle East.  They don’t even condemn North Korea as much as they do Israel.

Even some of the ‘abstainers’ took the time to virtue signal their contempt of Israel, so they could still sit with the ‘cool kids’ and tinpot dictators in the UN lunchrooms. Like Mexico, who denounced Israel but who didn’t object when Israel’s ‘evil IDF’ helped dig Mexican civilians out of the rubble last September when that earthquake hit. No reference to the other humanitarian aid like water and sanitation that they helped with, either. Hypocritcal ingrates.

As Nikki said in her speech: when The UN takes time to condemn a single nation, which it has done roughly 100 times, it is almost ALWAYS Israel. Apparently, no other country in the world ever has any issues needing to be addressed.

It’s a freaking joke of an organization.

Greg Gutfeld says that these d-bags are constantly double-parked — because they can.  Perhaps we should just tow their cars to Albany and make them take a cab to get them back.

Or we could do this and make them move to some Islamic country where there is no freedom and they don’t get to enjoy the benefits of capitalism:

DEAR PATRIOTS: Should Trump SHUTDOWN The U.N. And Turn It Into CONDOS?

Was Trump worried about the ‘International Community’ getting their panties in a twist? Here’s what he said in response:

Let ’em vote against us. We don’t care. We’ll save a lot.