The Media (D) has been saying that the Trump tax plan may just end the world as we know it.

Do you know what happens if you let people keep their own money?

According to Nancy Pelosi, it’s the end of the world.

She actually said that the tax bill was Armageddon.

The Democrats say that the passing of President Trump’s tax bill is a disaster of Biblical proportions.

Fire and brimstone coming down from the sky.

You mean you want the little people to keep their own money and decide what they want to do with it instead of having the government decide for them?

Do you want to allow large corporations — the employers — to keep more of their profits?

Really, is it moral to give the people that pay the taxes a cut in their taxes?  Why not give it to the people that don’t pay taxes?  Obviously, they have it harder.  They’re not making the big money and responsible for the employment of others.

It looks like the income tax bill will mean a big tax cut for the middle class.

The Cato Institute has summed it up:

The Joint Committee on Taxation (JCT) has released its distributional analysis of the final Republican tax bill. The bill provides even larger percentage cuts for middle earners than previous versions of the legislation…

…Looking at JCT’s table for 2019, second column, the percentage cuts are roughly similar across income groups from $20,000 to $1,000,000. But the JCT table slants the results by including payroll and excise taxes. The table under-measures the percentage cuts to the middle compared to the top.

Here is the estimate by the Cato Institute: 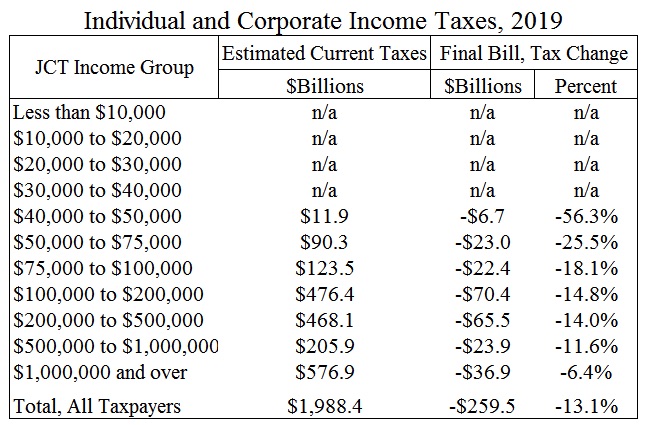 Data Notes: Households less than $40,000 are shown as “n/a” because they do not pay income taxes in aggregate. JCT does not appear to publish current law estimates of individual and corporate income taxes only for 2019, so I estimated them using ratios from this TPC table.

The Democrats and the Media (D) [but I repeat myself] have painted this as a tax hike for the middle class, but the vast majority of Americans — approximately 80 percent — will get a tax cut.

At the end of 2018, when Americans see that this tax plan has helped them, perhaps it’ll be Armageddon for the Democrats because ‘We the People’ will realize that they’ve been lied to by a complicit Media with a political agenda.

Not a surprise, really.

The Media (D) was complicit in allowing Weinstein to continue his abuse, is it any surprise that they wouldn’t push a leftist agenda that allows Big Government to screw over taxpayers?