While the Media (D) is looking around for mud to sling at Team Trump, they’re turning a blind eye to a ‘YUGE’ story.

Let’s say it in terms the Left can understand. 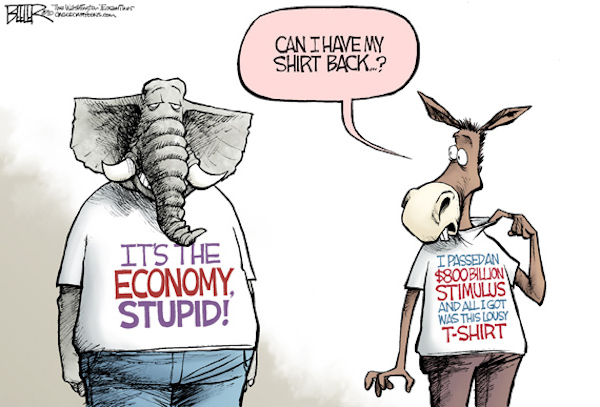 These are the same people who sounded like ‘Chicken Little’ crying about the sky falling when election day drew near. Remember how the economy was supposed to collapse if Trump won?

Politico’s prediction, less than a month before the election:

Wall Street is set up for a major crash if Donald Trump shocks the world on Election Day and wins the White House.

New research out on Friday suggests that financial markets strongly prefer a Hillary Clinton presidency and could react with panicked selling should Trump defy the polls and deliver a shocking upset on Nov. 8.

If Donald Trump wins the election, U.S. stocks (and likely many other markets overseas) will almost certainly tank.
How big of a drop? Forecasting firm Macroeconomic Advisors predicts an 8% fall in the U.S. A new paper out Friday from the Brookings Institute projects a 10% to 15% nosedive. You get the idea.

In fact, Breitbart put together a helpful list of ‘experts’ who made similar dire predictions. It may be useful in helping you decide just how much weight to give their ‘expert’ opinions in the future.

Meanwhile, here in the real world, the US economy isn’t ‘a dumpster fire’ … it is simply ‘on fire’.

DOW RISES 5000 POINTS ON THE YEAR FOR THE FIRST TIME EVER – MAKE AMERICA GREAT AGAIN!

Stocks and the economy have a long way to go after the Tax Cut Bill is totally understood and appreciated in scope and size. Immediate expensing will have a big impact. Biggest Tax Cuts and Reform EVER passed. Enjoy, and create many beautiful JOBS!

And after eight years of a President who never ONCE saw growth above 3% (a feat no Previous President had ever ‘accomplished’), we see this Reuters article before Trump is finished his first year in office:

The regional central bank’s “Nowcast” model calculated the economy was expanding at an annualized pace of 3.98 percent in the fourth quarter, quicker than the 3.92 percent rate calculated a week ago.

The New York Fed said its latest tracking estimate on GDP growth for the first three months of next year was 3.15 percent, compared with 3.12 percent from last week.
Source: Reuters

And, of course, that was dated December 15 — BEFORE the markets had any opportunity to react to the Tax Reform Plan.

American optimism on the economy is reaching new heights and President Donald Trump‘s approval ratings look to be benefiting, at least somewhat.

The CNBC All-American Economic Survey found that for the first time in at least 11 years, more than half of respondents to the survey rated the economy as good or excellent, while a near record 41 percent expected the economy to improve in the next year.
Source: CNBC 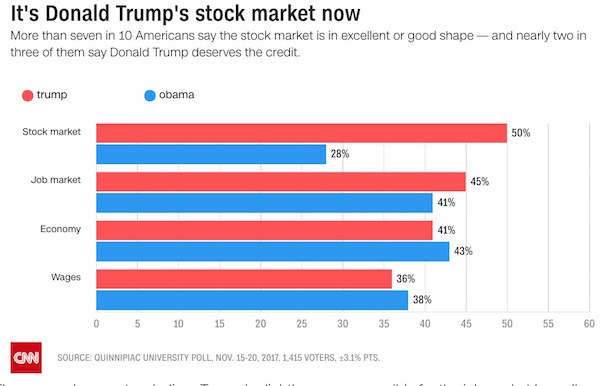 What Jim Acosta, Rachel Maddow and the Rest of The Media (D) STILL haven’t figured out
yet is why we call them ‘Fake News’.
Let’s spell it out for them. In a shirt.
Because you know they won’t be able to figure it out on their own.

The problem isn’t just the lies they tell…
It’s the truth they DON’T tell…
And the opinions laced right through them.
It’s propaganda:

And the best part? This shirt is made in the USA, printed in the USA, on an American-Made
t-shirt press!
*** VETERAN OPERATED ***