Will Whoopi dismiss this like she did Roman Polanski, who drugged and raped a teenage girl?

What are the Harpies on the view going to say about this photo?

They’re so transparently partisan, the Coven on the View.

The same women who pretend to care so deeply about the Weinstein revelations and the Access Hollywood tape didn’t have the same high standards for her own behavior.

Shortly after the election, there were reports of liberal women shutting their husbands out of the marital bed over politics. And Joy approved. (They were quipping about ‘electile’ dysfunction.)

Joy concurrs, guessing that after an election full of disgusting comments toward women – such as Trump infamously saying to “grab them by the pussy” – many are thinking, “You voted for that schmuck? I’m not sleeping with you!”

She quips, “We’re building a wall around our vaginas!”
Source: Entity

Joy also had some harsh words for Al Franken when he got outed for mistreating women.

“It’s very disappointing to hear this about Al Franken. He was a very funny comedian at this time, he’s a Senator from Minnesota, he’s a great advocate for women and other,” Joy Behar said. “It’s just so disappointing. But men of all different stripes are out there doing crazy shit.”
…”It’s not acceptable for anyone to do it. This has nothing to do with your political leaning, this is not a partisan issue, you shouldn’t be doing this and you should know better,” Whoopi Goldberg added. “Sometimes guys feel like they can make these kind of jokes and I think we have to make it as uncomfortable as women are making it to remind people, don’t touch me.”
Source: TooFab

Oh! You believe it’s not acceptable for ANYONE to do it, Joy?

This is the photo you are commenting on, right? 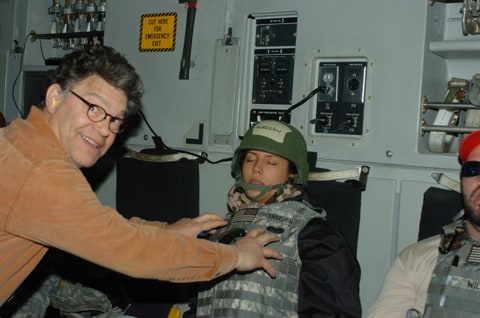 But she wasn’t finished. She went on to say:

“If somebody did that to me when I was asleep on a plane, lawyer up, quick,” McCain said. “You would have a big big problem.”

Hold that thought, Joy. Do you happen to have any comments about THIS photo? Maybe explain what’s happening here? 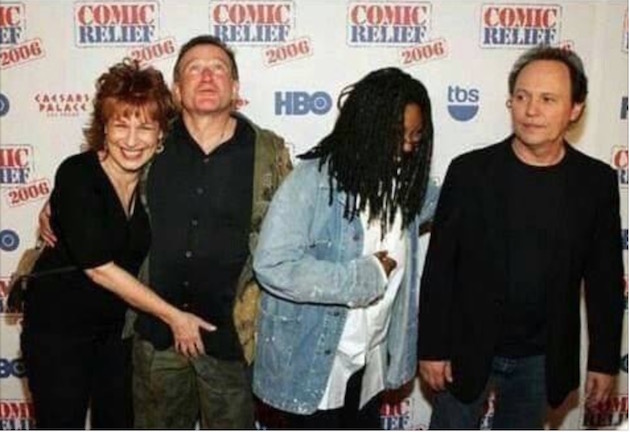 Whatever it is, Joy and Whoopi seem to think it’s just AWESOME and hilarious!

Billy Crystal doesn’t look very impressed. And with Robin Williams looking straight up like that, it’s hard to tell if he think it’s funny, or he’s just embarrassed in an especially awkward moment.

Was Joy popping off about how being a big-shot Celebrity like she is, it’s perfectly fine to waltz up to somebody and grab them by the penis, or package, or pecker, or whichever p-word will inspire a throng to march in knit hats?

Looks like the bridge is out on that moral high road you think you’re on.

And one last question. You already KNEW what kind of a guy Franken was. Why did you not use your platform to warn women about THIS guy? 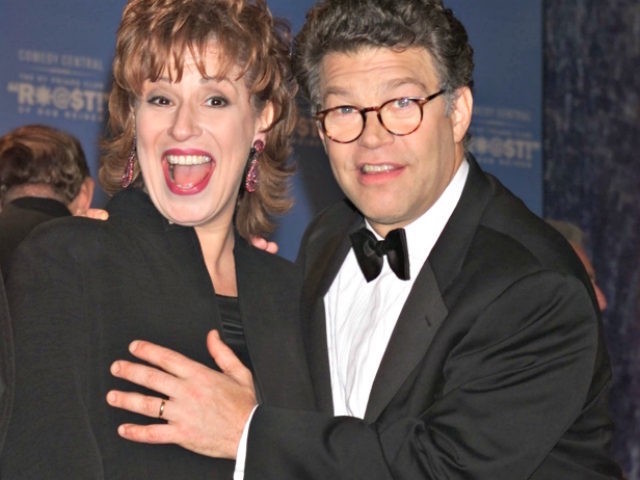 Oh wait. You wouldn’t have wanted to do THAT.