Now that Trump has tweeted about that Fake News trophy, ABC is bringing their ‘A-Game’, and giving CNN a run for their money.

Not only does it expose their lack of journalistic integrity… it shows us who they really are. (Back to that last part in a moment.)

ABC News on Friday evening corrected an explosive special report that aired in the morning saying that Donald Trump, as a candidate for president, had asked Michael Flynn to make contact with Russians.
During “World News Tonight,” ABC News investigative reporter Brian Ross said the source who had provided the initial information for his story later told him that it was as president-elect, not as a candidate, that Trump asked Flynn to contact the Russians.
The initial report, based on one anonymous source, prompted a dramatic reaction in the financial markets, and the Dow fell more than 350 points.
Source: CNN

The Coven on The View lapped it up, not surprisingly. As did a lot of ardent Anti-Trumpers. There’s only one problem with that news.

And, you can’t even call it a ‘harmless problem’. Because the stock market was hammered over this ‘Fake News’.

And it’s another situation where ‘a lie can travel halfway around the world before the truth can get its boots on.’ (Even that saying is generally attributed to people who never said it.)

ABC was forced to apologize. And more than that, they suspended Ross for a month.

CNN had reached out to ABC News in the early afternoon to ask why Ross’ initial reporting was not included in the network’s online story about Flynn pleading guilty to lying to the FBI.
Several hours later, a spokesperson for the network told CNN that Ross would be issuing a “clarification” on “World News Tonight,” which airs at 6:30 p.m. ET.
“[A] clarification tonight on something one of Flynn’s confidants told us and we reported earlier today,” Ross said on the program. “He said the president had asked Flynn to contact Russia during the campaign. He’s now clarifying that saying, according to Flynn, candidate Trump asked him during the campaign to find ways to repair relations with Russia and other world hot spots. And then after the election, the president-elect asked him to contact Russia on issues including working together to fight ISIS.”
Source: CNN

ABC had a statement.

“We deeply regret and apologize for the serious error we made yesterday,” ABC News said in a statement on Saturday. “The reporting conveyed by Brian Ross during the special report had not been fully vetted through our editorial standards process. As a result of our continued reporting over the next several hours ultimately we determined the information was wrong and we corrected the mistake on air and online.”
Source: NBC

So, who are they really?

They are political hacks who are just drooling over any opportunity to score hits against a political rival. If they had the same evidence against Hillary, would they be jumping the gun to report it on the flimsiest of evidence? Hell no, it would be like the reports of Bob Mendez — they’d have to be dragged kicking and screaming to report it.

And that, right there, is why we call them ‘Fake News’. They care more about scoring political points than they do about following the motto of Joe Friday. 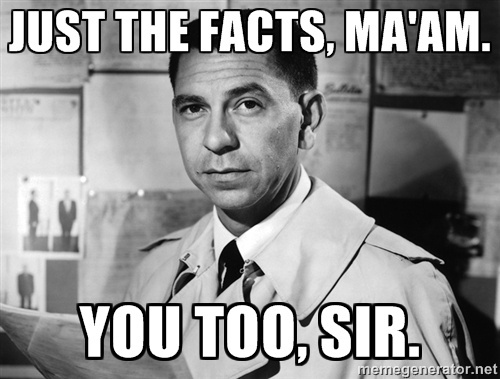