Were you wondering how they would top an accusation that she had (somehow) plagiarized … herself? Wonder no longer!

How many different ways can they be critical of Ivanka, anyway?

Not just her company, that they set out to destroy. (That sure backfired.)

And now they’re attacking her on her tour through India.

Calling her a plagiarist for recycling her own work in a different audience? That was really lame.

But the complaint about her clothes now? Insane. 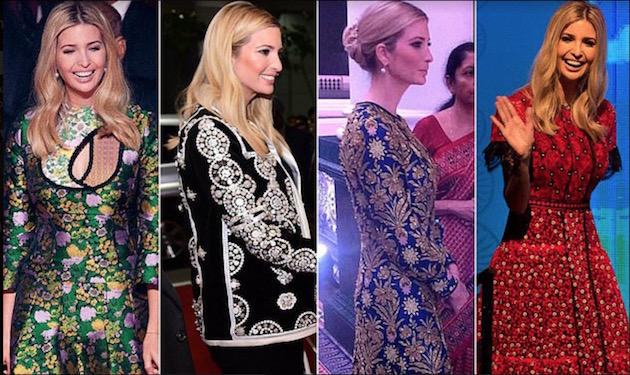 That got such ‘body-positive’ and ‘not-sexist-at-all’ comments as being a ‘botoxed Barbie.’

Not only that, she was hammered for — get this — ‘cultural appropriation’. As the headline tells it:

Wait a minute. Cultural appropriation? Where is all the clamor over ‘cultural appropriation’ when we were talking about Fauxcahontas/Pocahontas and her ‘Pow Wow Chow’? Aside from some ACTUAL Cherokees that are calling Warren out for her BS… it’s a non-issue. Even when she’s trying to call ‘Pocahontas’ a racist slur. (Pocahontas’s actual descendant, the one with a membership at Mar-A-Lago, disagrees.)

Speaking of ‘cultural appropriation’… what about when we saw these outfits overseas. Were critics equally upset when these two women wore foreign ‘cultural’ attire?