Fox NFL Sunday has decided to go to great lengths to hide the empty seats. Check this B.S. out.

Earlier this season, the L.A. Chargers hosted the Philadelphia Eagles. The stadium was flooded with Eagles fans, and it was so bad that the Chargers QB, Phillip Rivers, essentially said that it was a ‘home game’ for the Eagles.

It certainly looked more like a home game in Philly than one in L.A.

It seems that Fox is worried about the same thing happening again in L.A. when the Rams meet the Eagles.

The game hadn’t been protected from flexing earlier this season, and now that the game is on, they’re pulling out all the stops. The surprise season for both teams has made this game a must-watch according to Fox reckoning. The Rams are 9-3 while the Eagles are 10-2.

Fox is hoping for big ratings and has decided to move their studio show to outside the Coliseum and create a ‘college game day’ atmosphere.

But what happens if the game is heavily attended by Eagles fans?

Well, that would be embarrassing, wouldn’t it?

No worries. Fox has a plan: 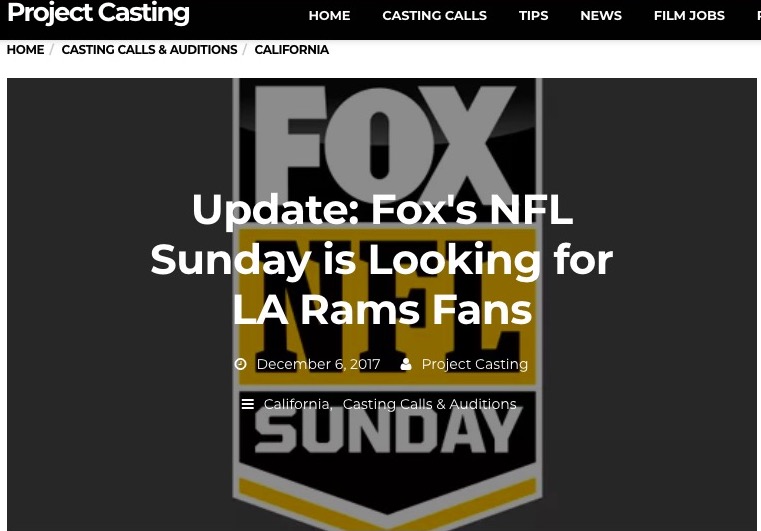 Producers are seeking the following types:

To audition for a role in the upcoming NFL Sunday pre-game show, check out the casting call breakdown below.

Fox denies that they’re paying anyone:

Update (Sunday, December 10th, 2017): We have received the following statement regarding Fox NFL Sunday’s pre-game show by Eddie Motul, Vice President of Communications at FOX Sports and FS1, “We hired 1iota to help secure a live audience for tomorrow’s FOX NFL SUNDAY pregame show from the LA Coliseum. Not sure where the information in your post is coming from but it doesn’t represent our intentions accurately and because of it there is a notion among several sports blogs that we are paying actors to be Rams fans and that is absolutely not the case. Our set is located inside the stadium. Our show airs at 9 am PT when the stadium is technically not open to the public so therefore we needed to “bring in” a live audience.”

Fox NFL SUNDAY is not casting, they are not looking for actors, and no one is being paid.