Franklin Graham has consistently been a big supporter of Donald Trump.  But this latest statement will make both leftists and never-Trumpers furious.

Just look at the mess in Washington — it was a fight to get Republicans to vote with the President’s agenda which was their own platform when they were candidates running for office.

Some of these people are willing to shoot themselves in the foot just so that President Trump doesn’t have a win.

But there’s one thing that President Trump is doing that has nothing to do with legislative agenda and everything to do with culture — he is standing for the Christian faith.

Who would have believed it?

Well, Franklin Graham is taking notice, and so are many, many Christians.

Here is a screenshot of the Facebook post that is going to make the never-Trumpers and the #Resistance have a fit: 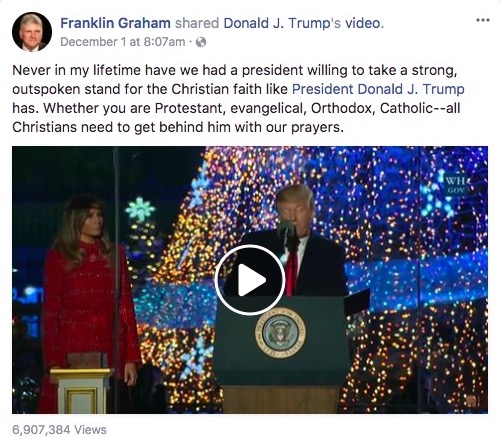 Here is the  video:

The Christmas Story begins 2,000 years ago with a mother, a father, their baby son, and the most extraordinary gift of all—the gift of God’s love for all of humanity.Whatever our beliefs, we know that the birth of Jesus Christ and the story of his life forever changed the course of human history….

As a Christian, can you be disappointed with your President saying that?

It was literally, ‘Jesus is the Reason for the Season’ followed by ‘Merry Christmas’.

And you know all of the ‘tolerant’ leftists are losing their minds.

Do you want to annoy a leftist even more?

Get this and wear it with pride!

And then wish them a ‘Merry Christmas’. 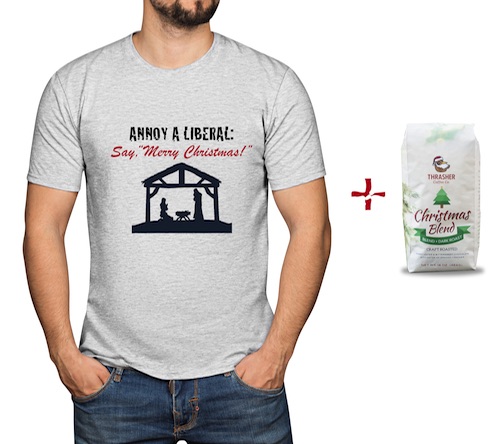 Liberals can be so annoying. And, yet, they are also easily annoyed! Anything that makes life better or brings people happiness is certain to drive them crazy. Especially at this time of year, where we celebrate God’s unconditional love to mankind with generous gift-giving to each other. Liberals get really bent out of shape at any mention of Jesus and would rather say, “Happy Holidays.” So, what do we do?

This wonderful new Christmas Blend is a very rich and complex coffee.Pairs perfectly with savory and sweet desserts. Best served with good tidings and cheer!
Our first and only blend to ever use 5 beans! This blend is comprised of Ethiopian, Rwandan, Kenyan, Sumatran & Brazilian coffees. This brew makes a great gift for the coffee lover in your life. You know, that one. And they will love it! With so many different beans and roasts unified in a cup its an experience to be savored. Countless flavor notes are waiting to be unwrapped. Santa- Thrasher will offer this special holiday roast until January 1st!
And the best part? This shirt is made in the USA, printed in the USA, on an American-Made t-shirt press!