Considering his particular area of, well, ‘expertise’ — you might expect him to be even MORE adamant about Israel’s claim to Jerusalem than almost anyone else?

Shouldn’t a nation having a right to select any of its own cities to be the capital be the most natural thing in the world? Sure. Unless you’re talking about Isreal. Then everything suddenly becomes ‘complicated’ somehow.

Jersualem was established as Israel’s capital more than 3000 years ago by no less than King David. We know this because of the historical writings of Scripture.

Whatever you think of the historical role of David himself, it’s ALSO clear from history that Jerusalem was absolutely critical in Israel’s history both as a Religious center of worship (Temple Mount) but ALSO as THE seat of political power. When Israel returned from Babylonian captivity, the very first priority was the rebuilding of Jerusalem. And even the final words spoken in the ceremony surrounding Passover Seder (if held abroad) are ‘next year in Jerusalem’.

So it should come as no surprise that the Jewish people would prefer their historical capital for a national capital, over a city (Tel Aviv) that was first founded the year Taft became our 27th President.

You’d think that setting Jerusalem as both the religious and political capital of Israel would be the most obvious thing in the world.

But they’re getting pushback. And sometimes, that pushback is from places you might not expect. Like the Pope. 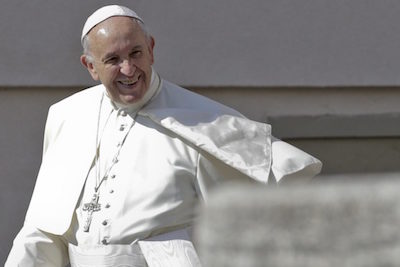 Hard as it may be for some to believe — yes. Really.

The Pope made a plea for Trump to rethink urgently and spoke out at his weekly general audience in Rome .
‘I make a heartfelt appeal so that all commit themselves to respecting the status quo of the city, in conformity with the pertinent resolutions of the United Nations,’ Pope Francis said.
The Pope told thousands of people at his general audience: ‘I cannot keep quiet about my deep concern about the situation that has been created in the last few days.’
Source: DailyMail

Hamas, who (to our knowledge) has still not stricken the pledge to destroy Isreal from their founding documents.

Theresa May — who you might think has enough to deal with in her own backyard, what with the recent spike in terrorist incidents — is publicly wringing her hands over Trump’s decision. (Clearly, the UK has no Churchill in office.) She ‘intendes to talk to the President about the matter’.

Yeah. Good luck with that.

Turkey has offered their usual calm and rational assessment of the situation ‘the move will plunge the region and the world into ‘a fire with no end in sight’ (Source: DailyMail). Sounds like they’re writing for Game Of Thrones, or a Democrat critique of a Republican Budget proposal, for that matter.

The Palestinians seek east Jerusalem as the capital of a future independent state and fear that Trump’s declaration essentially imposes on them a disastrous solution for one of the core issues in the Israeli-Palestinian conflict.
‘There is no way that there can be talks with the Americans. The peace process is finished. They have already pre-empted the outcome,’ said Palestinian official Hanan Ashrawi. ‘They cannot take us for granted.’
Source: DailyMail

They don’t want Israel to call Jerusalem their capital because they want it for themselves.

Israel’s prime minister, Benjamin Netanyahu, said on Facebook that ‘Our historical national identity is receiving important expressions every day.’ He said he would comment further later in the day.
Other members of his Cabinet were more forthcoming. Education Minister Naftali Bennett, head of the nationalist Jewish Home party, praised what he called Trump’s ‘bold and yet natural’ move.
‘The sooner the Arab world recognizes Jerusalem as our capital, the sooner we will reach real peace. Real peace that is not predicated on an illusion that we are going to carve up Jerusalem and carve up Israel,’ Bennett told The Associated Press on the sidelines of the Jerusalem Post Diplomatic Conference.
Source: Dailymail