Doesn’t this new revelation make it even more awkward that Omar Mateen’s father was so prominently visible at a Hillary rally during the campaign?

Just a couple of months after his son shot and killed 49 people at a gay nightclub in Orlando and pledging allegiance to ISIS while on the phone with police, Omar Mateen’s father, Seddique Mateen boldly proclaimed that he was #WithHer.

WTF: Look WHO Showed Up To HILLARY’S Rally Last Night

Hillary’s camp denies that they knew it was him and didn’t give him a primo seat.  But check out that video and look at how prominent he is — seems like an odd coincidence.

Now it seems that Omar Mateen’s wife, Noor Salman, is pretty sketchy, too.

It also raises more questions about the FBI letting guilty people off the hook.

It seems that just hours after the attack when she was questioned by the FBI, she answered questions and gave a written statement acknowledging that she knew what her husband had been planning.

The wife of the Pulse nightclub gunman apologized to FBI investigators for lying to them, said she ‘knew an attack was close’ in the days before the massacre and wished she could ‘go back to tell them’ about it before it was too late, it has been alleged.

Noor Salman, 31, the wife of Omar Mateen who was killed by a SWAT team on June 12, 2016, after slaughtering 49 people in the Orlando nightclub, allegedly made the remarks hours after the massacre.

She was being questioned by FBI agents and local police and is said to have given a written statement which authorities believe proves she knew what Mateen was planning.

Despite this damning evidence, including ‘odd behavior’ and admitting that she saw Mateen researching Pulse, Salman was released.  She moved to California with their young son and was a free woman proclaiming her innocence until January 2017 when she was arrested for her possible involvement in the shooting.

(Gee, what was it that happened in January 2017 that changed things so drastically?)

The statements are now being revealed for the first time as Salman prepares to stand trial in Florida.

They were revealed in court on Thursday at a suppression hearing. Her lawyers are trying to block them from going into evidence at her March trial.

There were a series of tweets between Mateen and Salman at 2:30 am — 30 minutes into his killing spree.

She claims that she texted Mateen after being woken by a call from his mother concerned with the whereabouts of her son.   The couple exchanged a few texts before he was shot and killed by police.

Salman texted:  ‘Where are you?’

Mateen then responded: ‘I love you, babe.’

Those text messages purport that she did not know where he was.

The conversation was prompted by a 2am phone call from Mateen’s mother to Salman.

She allegedly asked her daughter-in-law if she knew where Mateen was and was worried. It is not known if the mother was ever questioned over why she was suspicious.

And here’s one more bizarre piece of info:

It is significant, they say, because Mateen had made surveillance trips to Disney World in the weeks before his attack to determine if it would be a suitable place for a similar attack.

In a written statement to the FBI after the attack, Noor Salman, Orlando shooter Omar Mateen’s wife, says he looked at the Pulse website the day before and she knew he was going to attack the club. pic.twitter.com/qTPKvsxOug

Here are the images: 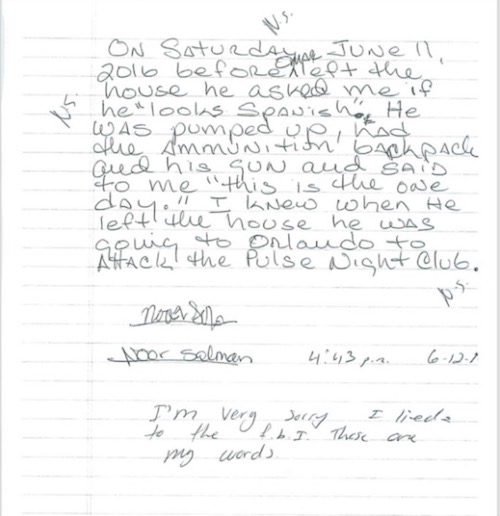 Later, police say Salman told them she saw him researching Pulse on the internet two days before the attack and that when she asked him about it, he said it was a ‘target’.

One FBI agent claims that Salman told him she ‘knew an attack was close’ afterwards.

She also allegedly admitted to driving past it with her husband in the days beforehand on a scouting mission – something police previously alleged they had done – and hearing Mateen say ‘how upset people are going to be when it gets attacked.’

The FBI agent testified in court on December 21:

According to the FBI agent, Salman wrote at the end of her statement: ‘I’m sorry for what happened. I wish I would go back and tell police and his family what he was going to do.

‘I’m sorry I lied to the FBI, these are my own words.’

Justin Enriquez, the FBI Agent who received the statement, told the court on Thursday:  ‘I realized, when I read that, that she knew.’

Even after all of that, the FBI let her go.

This is the same FBI that put surveillance on General Flynn for being on the transition team of the President-elect and has destroyed his reputation and job prospects because he has been charged with lying to the FBI.

So… let’s get this straight…

Hillary, her aides Huma Abedin and Cheryl Mills all lied to the FBI and nothing happens.

The wife of an ISIS-supporting terrorist shooter that killed 49 gay Americans lies to the FBI and nothing happens.

But Michael Flynn, who was acting in his role as the upcoming National Security Advisor is charged with lying to the FBI and his life is ruined?

You want to know what the new administrations priorities are?

We’ve got a shirt for that.