This Congresswoman thinks that she’s entitled to the royal treatment because she’s better than you.

I’m old enough to remember when that term was used to describe gay men of a particular variety.

RuPaul even ‘crowns’ the winners on his show RuPaul’s Drag Race:

Read the Clash report on Sheila’s bumping a human rights activist and schoolteacher from her paid First Class seat here:

It seems that Jackson Lee is a pain in the @ss in general, but especially with regard to travel.

She demands to be treated better than the ‘little people’.

…previous reports show the House member, who was elected in 1994, has had a history of transportation drama, including berating flight attendants on first class flights and making her Congressional staff drive her one block, while waiting on her for hours and disrupting traffic.

She’s been documented calling her employees ‘you stupid motherf***er,’ while referring to herself as Congressional royalty.

‘You don’t understand. I am a queen, and I demand to be treated like a queen,‘ she was quoted saying in 1998, three years into her nearly 23-year tenure on Capitol Hill.

This isn’t the first time she’s had problems with travel.

Jackson Lee has also demanded that her staff wait for her with the car running and blocking rush hour traffic — sometimes for hours.

Sheila Jackson Lee has been a pain to airlines before this latest embarrassment.

Before this week’s United debacle, Jackson Lee had a tense relationship with Continental, the Houston-based carrier that merged with United in 2010.

Jackson Lee’s staff would book seats on multiple flights for her week-end trips back to Houston, allowing the congresswoman to pick the trip that would best fit her schedule.

This, however, would leave the airline in a bind, the Weekly Standard noted, as Continental wouldn’t be able to sell off the premier seats she didn’t use.

And while Jackson Lee would book coach tickets, the congresswoman was often bumped to first class.

In 1998, Jackson Lee berated a flight attendant because her meal choice wasn’t available on her flight.

It was reported that the congresswoman said, ‘Don’t you know who I am?  I’m Congresswoman Sheila Jackson Lee. Where is my seafood meal? I know it was ordered!’

After that incident, Continental, the airline she was traveling on, contacted her office and warned her that her behavior would need to improve or she would be banned from taking their flights.

Just one year later, Jackson Lee had boarded a Continental plane in Washington D.C., but realized that she had misplaced her purse (it was on the plane) but deplaned and went to look in the terminal for it.  She was livid when the plane left the gate without her and demanded to be let back on.  She didn’t believe that it was against Federal Aviation Administration regulations to do so.

‘She accused the gate staff of racism and demanded to see their supervisor, who was a black woman,’ the Weekly Standard wrote. ‘Her purse, meanwhile, was unceremoniously dropped out of the cockpit window and ferried back to her.‘

Eighteen years later, many of the themes remain the same as Jackson Lee pointed to racism as the crux of the problem, protesting she did nothing wrong when she was bumped to a white woman’s seat on December 18 on a flight from Houston to Washington, D.C.

Jackson Lee was annoyed that she even had to respond to the debacle. 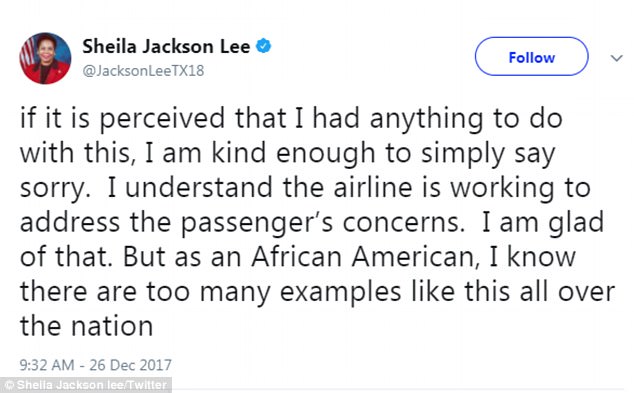 See that?  More suggestions that it’s because of ‘racism’.
The teacher, Jean-Marie Simon, was heading home from Guatemala and was on the second leg of her journey when she got bumped.

Simon claims that after an hour-long weather delay United carelessly tossed her out of her first-class seat to make way for Jackson Lee, saying in a Facebook post that she saw a uniformed airline employee pull the congresswoman from the boarding line and escort her to a first-class seat.

Then Simon, who was on the second leg of her return flight from Guatemala, said she went to the gate to board and was told her ticket wasn’t in the system.

When the attendant asked her if she had canceled her ticket, Simon replied: ‘No. I just want to go home.’

It wasn’t until she was seated in coach that she was told by a fellow passenger that her new seat was formerly occupied by a congresswoman.

After she was seated, she claims she was told by another passenger that her original seat was occupied by a congresswoman and that he had seen her do it twice before.

The airline compensated her with a $500 voucher and another ticket for that flight in Economy Plus.

Simon says that the ‘Democracy Dies In Darkness’ Washington Post dropped the story despite her proof. 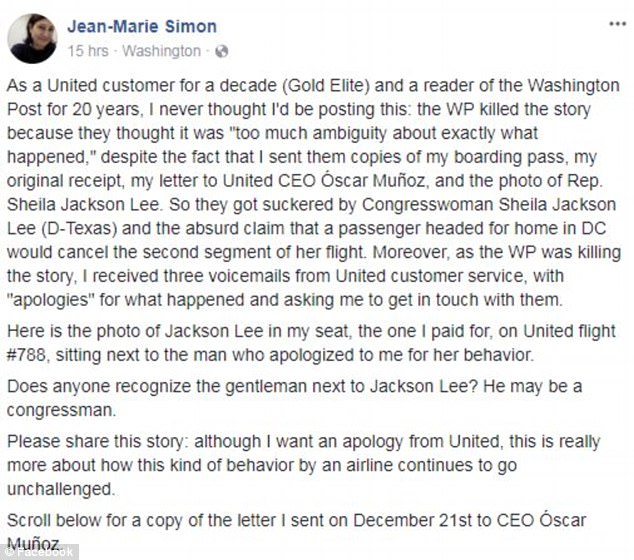 Remember what a winner that the Washington Post is protecting.

She thinks that the Constitution is 400 years old:

She was on her cellphone while a cancer survivor was asking her a question at a Townhall meeting: