Or… they could take that stick out of their butts, and not get so worked up about a stranger’s Tree.

But of course, THAT’s not going to happen, is it?

A Muslim boxer, Amir Khan, with more than a million followers on Instagram shared a tender family moment with his fans.

He shared the photo of the tree on the left… 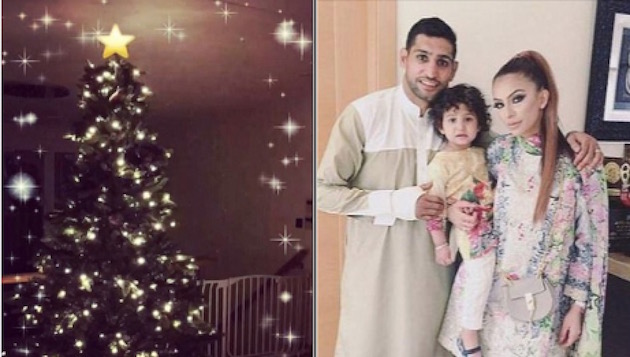 …which he put up as a surprise for his little daughter on the right.

Here is the message that went with the photo of the tree:

That’s a dad who wants to see his kid smile. Is he a Muslim? Sure.

He’s not celebrating the birth of Jesus in the way that a Christian might on December 25th. (Although even they accept him as a prophet.)

Some Jewish families set up what they jokingly call a ‘Hanuka bush’. Plenty of atheists have adopted both the holiday and the traditions that go with it, even if they have no interest in the theological ‘Reason for the Season’. And did we mention that he’s in a Western Country? He’s in England.

How did his Muslim followers react to this photo?

Let’s just say, they weren’t in line with the Prince of Peace the season celebrates, so much as the Prophet of the Sword who founded that OTHER religion… the one with that Orwellian name, ‘The Religion of Peace’. 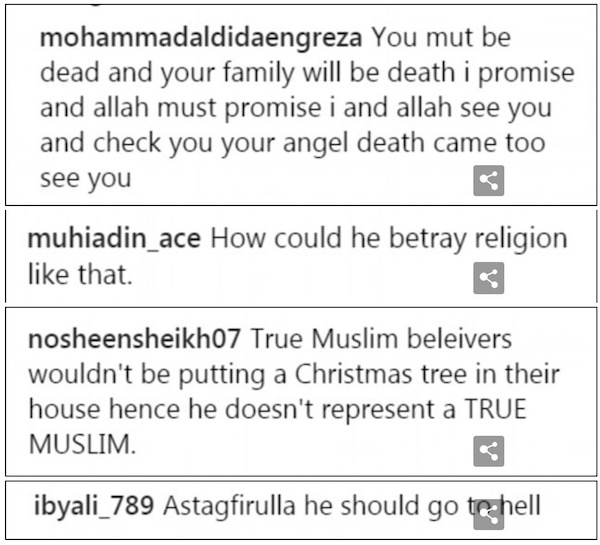 What did we really expect from the people who committed acts of war, burning embassies because someone drew a cartoon they didn’t appreciate.

People have noticed how crazy you’re getting, and it’s not winning anyone over. Many Muslims, after seeing the difference between Islam and Christianity, are voting with their feet.

Yet, despite such risks, Pacwa said that mass conversions are happening even in very fundamentalist countries. There is rapidly growing number of conversions especially on the edges of the Muslim world in the western and southern parts of Africa, he said. “Africa is now growing predominantly Christian despite crackdowns,” Pacwa said.

Some of the noteworthy countries he mentioned include Iran, reported to have 3 million Christians, and Indonesia with reports of 2 million a year converting. (Here is a video of a Muslim Indonesian family that converted, explaining that they now pray to Allah as Father, Son—Jesus is called Isa—and Holy Spirit.)
Source: NCRegister

And maybe — just maybe — Mr. Khan might one day add his name to those who have embraced the ‘reason for the season’.

Merry Christmas, Mr Khan, to you and yours.

And to the haters?