Obama. Hezbollah. Putin. Assad. And decisions affecting — if a Republican did them — would be denounced as war crimes.

According to this report, Obama has blood on his hands. A LOT of it.

As one news outlet described it in a headline, “The Obama administration ‘SABOTAGED a DEA operation to stop Hezbollah smuggling drugs into the US and helped the militant group grow into a global threat so the Iran nuke deal would go ahead'”

Bold statement. It’ll take a little work to unpack it. So let’s get started.

Think back — way back — to 2012. Benghazi was still burning, and Obama was mocking Romney for thinking that Russia was a credible threat.

You know… two years AFTER intelligence had told him that Russia was trying to bribe their way into some Uranium. (Search Uranium One for related stories, if you like, here’s one to get you started: WIKILEAKS: Guess Who OWNED 75,000 Shares in PUTIN Energy Company?)

Well, we now know a little more about what Obama was really doing while that Jayvee team (ISIS) was gathering strength. He was turning a blind eye to terrorists.

Related Story:
Hezbollah supplying IEDS that were killing/maiming our troops in Iraq, and an explosive that would reportedly rip our M1 Abrams Tank In HALF!

Obama’s administration was actively shutting down investigations that would have exposed and stopped them. Because he had bigger fish to fry… he was hellbent on delivering a planeload of unmarked bills to the world’s largest State Sponsor of Terrorism.

Yes, even Obama’s OWN State Department’s findings called Iran the World’s Largest State Sponsor of Terrorism. Which is strange, of course, since anyone on the left could tell you that Iran is run by a Theocracy loyal to the Religion of Peace™

Now POLITICO — hardly a ‘Right-Wing Rag’ dropped a bombshell about what exactly Team Obama was willing to turn a blind eye to in the interest of getting his precious deal with Iran. It was an exhaustive article, too complex to let us give a full treatment of it here.

All block quotes that follow come from their piece entitled, “The secret backstory of how Obama let Hezbollah off the hook

Whatever happened to Mr. ‘If it saves even one life’ when this decision was made?

In its determination to secure a nuclear deal with Iran, the Obama administration derailed an ambitious law enforcement campaign targeting drug trafficking by the Iranian-backed terrorist group Hezbollah, even as it was funneling cocaine into the United States, according to a POLITICO investigation.
The campaign, dubbed Project Cassandra, was launched in 2008 after the Drug Enforcement Administration amassed evidence that Hezbollah had transformed itself from a Middle East-focused military and political organization into an international crime syndicate that some investigators believed was collecting $1 billion a year from drug and weapons trafficking, money laundering and other criminal activities.

Did you catch that? DRUG AND WEAPONS TRAFFICKING???

The Justice Department declined requests by Project Cassandra and other authorities to file criminal charges against major players such as Hezbollah’s high-profile envoy to Iran, a Lebanese bank that allegedly laundered billions in alleged drug profits, and a central player in a U.S.-based cell of the Iranian paramilitary Quds force. And the State Department rejected requests to lure high-value targets to countries where they could be arrested.

“This was a policy decision, it was a systematic decision,” said David Asher, who helped establish and oversee Project Cassandra as a Defense Department illicit finance analyst. “They serially ripped apart this entire effort that was very well supported and resourced, and it was done from the top down.”

And what was the result? Multi-ton loads of cocaine entering the United States.

Ah, shucks. What possible harm can a few tons of cocaine and some illegal firearms do to a civil society, anyway?

The man who would become Obama’s top counterterrorism adviser and then CIA director, John Brennan, went further. He recommended in a policy paper that “the next president has the opportunity to set a new course for relations between the two countries” through not only a direct dialogue, but “greater assimilation of Hezbollah into Lebanon’s political system.”

Maybe these policy geniuses would propose a similar intention to assimilate ISIS?

Let’s look at some of the ‘ones who got away’.

Lebanese arms dealer Ali Fayad (aka Fayyad). Ukraine-based arms merchant suspected of being a Hezbollah operative moving large amounts of weapons to Syria. He’s a suspected top Hezbollah operative whom agents believed reported to Russian President Vladimir Putin as a key supplier of weapons to Syria and Iraq, was arrested in Prague in the spring of 2014. But for the nearly two years Fayad was in custody, top Obama administration officials declined to apply serious pressure on the Czech government to extradite him to the United States, even as Putin was lobbying aggressively against it.
Fayad, who had been indicted in U.S. courts on charges of planning the murders of U.S. government employees, attempting to provide material support to a terrorist organization and attempting to acquire, transfer and use anti-aircraft missiles, was ultimately sent to Beirut. He is now believed by U.S. officials to be back in business, and helping to arm militants in Syria and elsewhere with Russian heavy weapons.

Was this some of the ‘flexibility’ Obama was telling the Russians about?

Have you heard of ‘The Ghost’? Sounds like someone out of a spy novel, or a John Wick flick, right?

Project Cassandra members say administration officials also blocked or undermined their efforts to go after other top Hezbollah operatives including one nicknamed the ‘Ghost,” allowing them to remain active despite being under sealed U.S. indictment for years. People familiar with his case say the Ghost has been one of the world’s biggest cocaine traffickers, including to the U.S., as well as a major supplier of conventional and chemical weapons for use by Syrian President Bashar Assad against his people.
And when Project Cassandra agents and other investigators sought repeatedly to investigate and prosecute Abdallah Safieddine, Hezbollah’s longtime envoy to Iran, whom they considered the linchpin of Hezbollah’s criminal network, the Justice Department refused, according to four former officials with direct knowledge of the cases.

“I had no clue who he was. But this guy was sending money into Iraq, to kill American soldiers.” 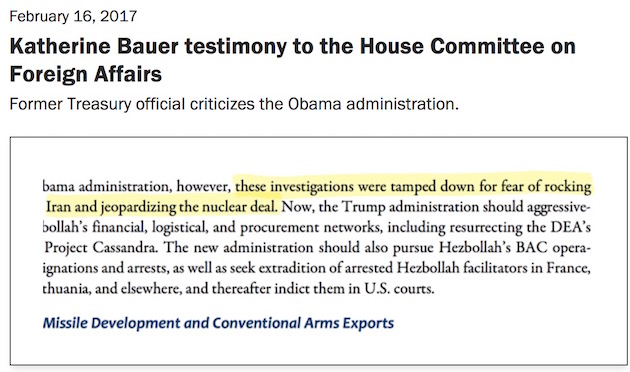 Here is the ‘motive’.

“The closer we got to the [Iran deal], the more these activities went away,” Asher said. “So much of the capability, whether it was special operations, whether it was law enforcement, whether it was [Treasury] designations — even the capacity, the personnel assigned to this mission — it was assiduously drained, almost to the last drop, by the end of the Obama administration.”

So, let me get this straight.

Not only did Obama FAIL to enforce his OWN ‘Red Line’… but he actually allowed ‘the Ghost’ to provide Assad with the very weapons he would use to CROSS that red line and drop poison gas on his own citizens?

“Right now, we have 50 FBI agents not doing anything because they know their Iran cases aren’t going anywhere”

— Jack Kelly on what a Justice Department official told him about the chilling effect of Obama’s rapprochement with Iran.

And this was a DOJ decision? If ever there was a time and reason to cal for our leaders to ‘Drain the Swamp’ … this is it!

So much for that ‘Scandal-Free’ administration that Obama’s Media flunkies keep telling us about.

Obama and his team making policy at the DOJ literally aided and abetted war criminals who had been indicted for planning the murders of multiple US Government Officials, and had been providing POISON GAS and Military Hardware to Assad.

And people are worried about Trump botching foreign policy? SERIOUSLY?

At least we know TRUMP thinks American lives are worth saving.