You’d think more folks on the left would be happy to name their kid after the ‘most qualified person to ever run for President’… but, no.

Or so they say.

They don’t love her enough to bestow her moniker on their offspring.

Hillary has been in the public eye for decades. She was the wife of a wildly popular President, she parlayed that into a Senate seat, and ran for President — twice.

She’s been ubiquitous since the early 1990s.

Oh, sure, she’s had her fair share of scandals.

– Calling half the country a ‘basket of deplorables’
– Rigging the Democratic Primary to defeat Bernie
– Her private home server
– The mishandling of classified material as Secretary of State
– Her deleted emails
– Benghazi
– Foggy Bottom conflict of interest
– Clinton Foundation pay-to-play
– Trusting Sidney Blumenthal that Benghazi was ‘spontaneous’ (or trusting Blumenthal at all)
– Her big money speeches that were recorded
– Whitewater
– Troopergate
– Travelgate
– Vince Foster’s suicide
– ‘Bimbo Eruptions’ dismissing the women accusing Bill of sexual misconduct that deserved to be ‘heard, believed, and supported’
– Defending a rapist and accusing the victim, Kathy Shelton, (who was 12-years old at the time) of wanting to have sex with older men. Shelton was brutally raped by 2 men, was in a coma as a result of the violence of the attack, and was unable to have children later in life. A recording of Hillary discussing the case and laughing about it was later released.
– And of course, the curious case of the Clinton Body Count

So, don’t say that Hillary hasn’t accomplished anything!

She’s managed to dodge any consequence for any of those things, and that, my friends, takes skill.

Another accomplishment you can add to her resumé is to single-handedly annihilate the popularity of the name ‘Hillary’.

She did to the name ‘Hillary’ what she did to her husband’s libido.

And both were quite a feat, really.

Hillary was a very popular name for girls right up until the Clinton Presidency.

According to this graph, the name Hillary peaked and then plummeted, oh, right around 1992. 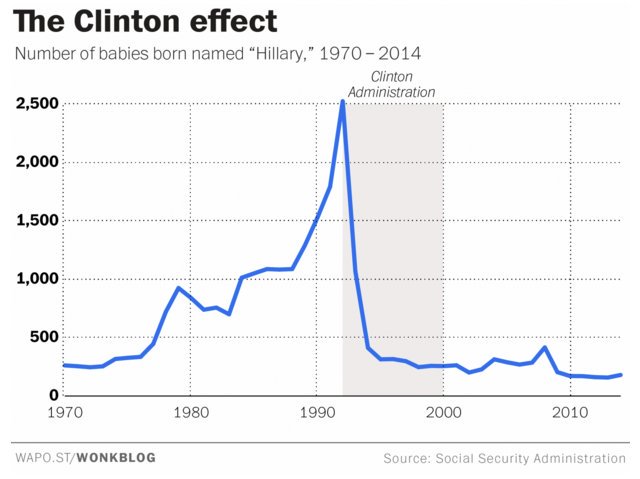 According to the website where the information was posted, the name ‘Hillary’ is ranked 1364th overall for girl’s names.  Only one in 10,273 babies is named Hillary in the United States.  That’s a total of 171 in all of the United States in 2016 — the year that so many predicted she would win the Presidency. 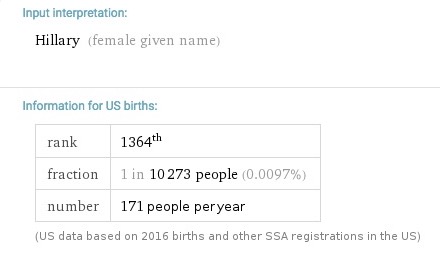 When conservatives say that Hillary is vastly unpopular, perhaps the leftist need to take note.

After all, we were right about President Trump.

You know that we’re right about Hillary, too.