At this rate, she’ll never be cured of her delusions of relevance.

Grandeur, nothing. Her biggest problem is that she thinks she still matters.

Some moron threw her a scrap of hope to cling to that will make feed the delusion she still somehow matters on the national political scene.

No, it’s not the ‘Hillary’ tree-topper ‘angel’. That’s just creepy.

Well, ok. It’s not as creepy as THIS story, but still — pretty damned creepy.

The sellouts at SNL are nailing their colors to the mast, it seems.

Or at least etching them into their skin. SNL’s Pete Davidson (I could have sworn that was a guy’s name) is getting some ink. Yes, indeed — he’s gotten himself a tattoo of Hillary Clinton. 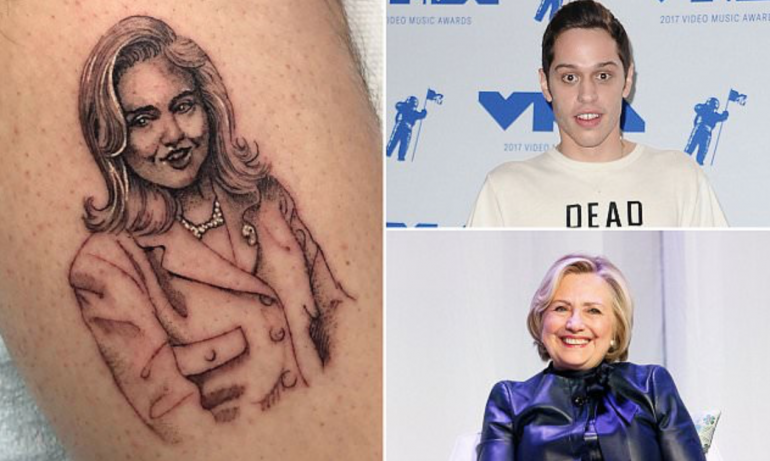 He DOES understand that this won’t wash off, doesn’t he?

Although, on closer inspection, it could be any number of washed-up has-beens. Madonna, for instance.

Saturday Night Live cast member Pete Davidson has gotten a tattoo of Hillary Clinton, and she says she’s ‘honored’ by it.

Davidson, a 24-year-old New York City native who was an outspoken supporter of Clinton during the presidential election, shared a photo of the new tattoo of her face on Instagram Friday.

‘Wanted to get @hillaryclinton a Christmas gift so I got a tattoo of my hero,’ Peterson wrote.

I really don’t know who to feel more pity for.

Hillary Clinton for being flattered by this …

Or the SNL dope who’s concept of hero is Hillary Clinton.

If THAT is who young bucks are looking to as heroes, we’re in worse shape than I thought.

Strongest people? You don’t get out much, do you?

She rigged her own primary and then had the audacity to write a book bitching about ‘rigged elections’.

If you can’t do better than her for a ‘role model’ there’s gotta be a medical explanation.