If this happened to your relative, what would you do?

The family of 75-year old Bernice Kekona is suing Alaska Airlines and a contractor for the woman’s death. The elderly, disabled grandmother was strapped into her motorized wheelchair when she fell down the escalator at the Portland International Airport in June.

Kekona never recovered from her injuries sustained in the fall and died as a result of them.

The family had hired a contractor to take Kekona from the gate to the next gate of her connecting flight, but although the assistance had been confirmed several times, Kekona was left to wander the airport alone and confused when she accidentally fell down the escalator.

Video captured the moment that Bernice Kekona, seat-belted to her power wheelchair, tumbled and crashed down an escalator, landing near the bottom with the heavy chair on top of her.

After her flight from Hawaii landed in Portland in June 2017, the family says they hired a contractor to make sure Kekona arrived safely to her connecting flight. But now they argue the airline and its contractor did not provide the service as promised.

Watch the horrifying moment Kekona fell down the escalator (WARNING):

Kekona fell nearly 21 steps when she was assisted by the man who was going up the escalator.

She suffered multiple injuries to her head and chest, gashes to her face, and a cut on her Achilles tendon that became infected and led to her leg being amputated. This surgery is what led to her death.

In September, the wound to her tendon became so infected that doctors were forced to amputate her leg below the knee, according to a lawsuit filed by the family. Her blood pressure never recovered following the surgery and Kekona died the next day. 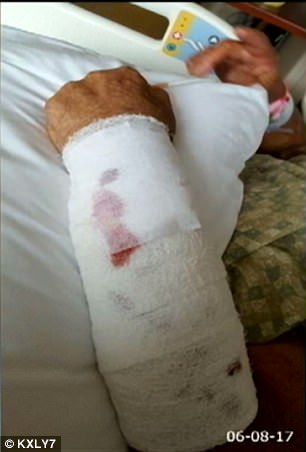 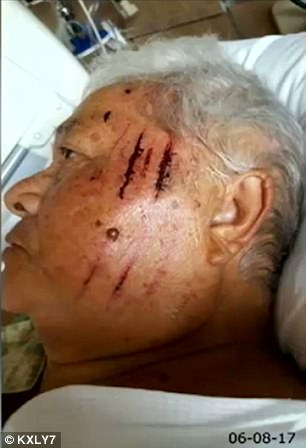 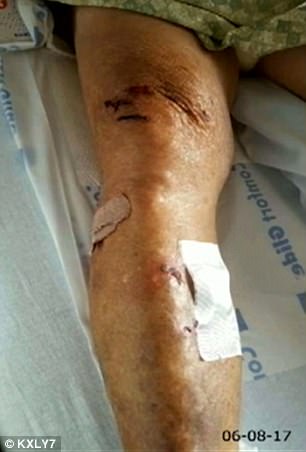 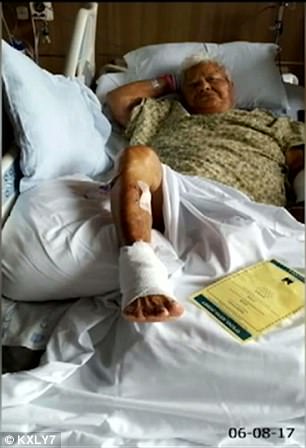 The family is suing Alaska Airlines and the third-party contractor, Huntleigh, USA for not providing the gate-to-gate service requested.

The family is seeking reparation for damages, expenses and any ‘further relief as the court may deem just and proper’ resulting from Kekona’s fatal fall, according to court documents.

‘Between her injury and her death, Bernice incurred almost $300,000 in medical bills to treat her injuries from the fall,’ attorneys Brook Cunningham and Troy Nelson wrote.

According to the lawsuit, when Kekona was at the arrival gate, she showed her ticket to an Alaska Airlines employee who pointed her in the direction she needed to go.

Kekona was captured on video surveillance in the airport wandering around alone seemingly lost and confused looking for her departure gate.

Huntleigh, USA is contracted by Alaska Airlines for services to escort disabled customers to and from their gates, has not yet seen the lawsuit and therefore cannot comment on it.

Alaska Airlines is disputing the claims saying that Kekona refused the assistance.

Alaska Airlines said an investigation is continuing, but ‘it appears that Ms Kekona declined ongoing assistance in the terminal and decided to proceed on her own to her connecting flight.’

The airline also noted her reservation did not note any ‘cognitive, visual or auditory impairments.’

The company added that it was ‘heartbroken by this tragic and disturbing incident’.
Source: Daily Mail

What a horrible tragedy.

Maybe it’s just me, but although Bernice Kekona did indeed have the right to refuse service, the insistance of the family members to ensure her safe transport from gate to gate should have been noted.

The investigation by Alaska Airlines also doesn’t mention any contractor from Huntleigh, USA. Did she dismiss the person that was to escort her? Was there even one at the gate waiting for her? Was she supposed to wait until one arrived? So many questions.

This service is supposed to protect disabled travelers from situations like this.

Kudos to that stranger that hopped over the escalator railing to help Kekona when he saw her fall, as well as the others that came to her aid.

What do you think of this tragedy?

Would you be suing the airline and the contractor?