Something is certainly amiss, to put it mildly. It is very strange that, over the years, there has been an unusually large number of individuals associated with the Clintons who have died mysteriously. Currently at least 30-plus Clinton associates have departed. Scandals and unexplained occurrences have emerged and have gone on from the Clintons for decades. People suddenly disappear, commit suicide, have car and airplane wrecks just before testifying in cases with Hillary and Bill’s involvement. Although some of the deaths have been going on for many years, many took place during the Whitewater investigation (1993-1996).

Here are some instances of questionable deaths:
*Susan Coleman, who died February 15, 1977. She was pregnant at the time of her death and rumored to have had an affair with Bill Clinton when he was the Arkansas Attorney General. She died of a gunshot wound to the back of her head, but the death was ruled a suicide.

*Vince Foster, died July 20, 1993. He was the deputy White House counsel and Hillary’s law partner at the Rose Law Firm. He had connections to both Travelgate and Whitewater. He was found dead in a park with a gunshot wound to his mouth. The crime scene had been altered and major newspapers killed the story by reporters who were looking for the truth. Edward Klein writing in his 2005 book about Hillary, stated that she had two of her trusted aides remove files and memos from Foster’s office. Hillary also had investigators barred from entering the office.

*Jerry Luther Parks, died September 26, 1993. He had been head of security during the 1992 Presidential campaign in Little Rock, Arkansas. He was shot through the rear window of his car with a semi-automatic handgun. He knew of the illegal activities.

*Ron Brown, died April 3, 1996. He served as the US Secretary of Commerce and threatened to expose White House-Asian fund raising schemes. He died, along with 34 others, in a plane crash in Croatia. He was the only person later found with a head wound that looked like a bullet hole.

*John Ashe, died June 22, 2016. He was a former United Nations General Assembly President. He was found dead in his New York home and the cause of death was reported as a heart attack. However, his throat had been crushed. Ashe was scheduled to testify in a few days with Chinese businessman and co-defendant Ng Lap Seng who was accused of smuggling 4.5 million dollars into the United States. The New York Post said that Ng was identified in a 1998 Senate document, “as the source of hundreds of thousands of dollars illegally funneled through an Arkansas restaurant owner, Charlie Trie, to the Democrat National Committee during the Clinton administration”.

*Seth Rich, died July 10, 2016. He was a Democrat National Committee staffer who was gunned down while walking on a Washington DC street. Did he know too much?

*Dr. Dean Lorich, died December 10, 2017. He was an orthopedic surgeon who volunteered in Haiti, and exposed the Clinton Foundation corruption. He was found dead in his New York apartment by his eleven- year-old daughter, with a knife in his chest. He was part of the relief effort sent by the United States to Haiti after the 2010 earthquake. Dr. Lorich exposed wide-spread corruption and malpractice of the Clinton Foundation that cost the lives of thousands of children. Billions of dollars were raised by the Foundation supposedly to help the Haitians, but most of the money did not reach the people in need. Only 0.6% went to helping the citizens; 9.6% went to the Haitian government and 89.8%, or 5.4 billion dollars went to non-Haitian organizations and, basically Clinton buddies.

Is it bizarre or just a coincidence that a political family, the Clintons, could have so many associates and others die? Some were either affiliated with the corruption found in the Clinton Foundation or were involved with issues while Bill served as POTUS and Hillary served as Obama’s Secretary of State. Other scandals include those brought on by Bill’s sexual promiscuity. The body count grows and it goes on without any comment from the mainstream media. It is indeed outrageous that the Democrats not only ignore corruption, but encourage it.

Last word: In the United States of America nobody is supposed to be above the law. So, why are the Clintons getting a free pass? I understand that much has been covered up and lost with the deaths of so many, but there are definitely instances of corruption that can be investigated and the perpetrators prosecuted, indicted, and eventually incarcerated. Let the Department of Justice look into the dealings of the Clinton Clan.

Sessions Fires Back, Tells Trump He’s ‘Damn Fortunate’ I Recused Himself From Russia Probe
May 23rd, 2020 Flag And Cross 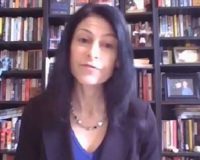 FBI Moves On Dianne Feinstein- Orders Her To Hand Over Documents On Her Husband’s Stock Trades
May 23rd, 2020 DC Dirty Laundry

Vicious Nursing Home Attacker Had COVID-19 and Was Quarantined Among the Elderly Despite Mental Illness and Felony Charges
May 22nd, 2020 Big League Politics