Hey Corker? Didn’t you say we were on the way to WWIII? Are there any other dumb public predictions you’d like to make? 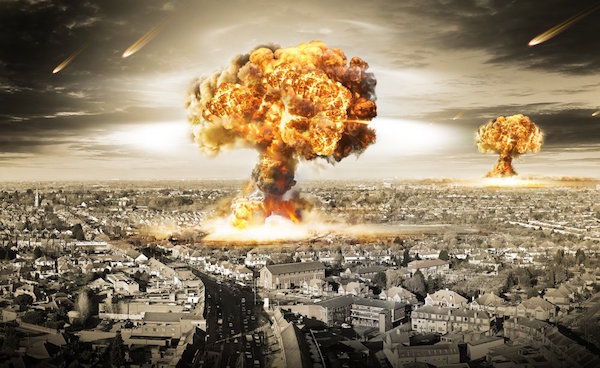 Trending: CIVIL WAR: Remember, THIS Is What Silicon Valley And Some Key Bernie Bros WANTED

And When Trump tweeted this:

North Korean Leader Kim Jong Un just stated that the “Nuclear Button is on his desk at all times.” Will someone from his depleted and food starved regime please inform him that I too have a Nuclear Button, but it is a much bigger & more powerful one than his, and my Button works!

The usual Hollywood #Resist crowd was bleating about it… The so-called late-night comedians droned on about it, between weepy monologues about health care coverage… The press and even supposedly ‘respectable’ politicians went on about it… Corker had a public feud with Trump about it.

Our President, they said, was leading us to WWIII.

By NOT cowering to the threats of violence, he called Kim Jong Un’s bluff. Publicly.

‘Officially’ they threw insults back at Trump ‘loser’ and ‘lunatic’ back at Trump. (He must be watching Morning Joe. Sounds just like him.)

But look at North Korea’s ACTIONS since that day.

North Korea’s playbook — for years — has been the same. Throw a tantrum, make some threats, get concessions. The scheme was a little like a mafia protection racket.

Nice restaurant you’ve got there… shame if something should happen to it.

But Trump didn’t play along and give any concessions. He didn’t blink. He threatened to match force with force.

And worse (for an Eastern culture that puts so much weight on honor and shame) he was belittling him on the world stage.

Trump played his role. I don’t WANT to turn your capital to ashes… but it’s well within my power. Choose wisely.

South Korea — and we’ve been told their current government leans left — was open to talks.

North Korea and South Korea have agreed to march together under a single unified Korea flag at the Winter Olympics, according to South Korean officials.
Seoul’s Unification Ministry says the Koreas reached the agreement during talks Wednesday at the border village of Panmunjom.
It says athletes from the two Koreas will march together under a “unification flag” depicting their peninsula during the opening ceremony in Pyeongchang.
…The two countries have also agreed to form a shared women’s ice hockey team in a historic moment for the peninsula. This will be the first time ever that a united team from the two Koreas has competed in the Olympics.
…North and South Korea opened talks over the Winter Olympics last week – the first time in two years the two nations have been in dialogue.
Source: Independent

You remember WHY Trump tweeted about his bigger button that works, don’t you?

It was in answer to Little Rocket Man’s New Years’ Day Speech:

“The entire United States is within range of our nuclear weapons, and a nuclear button is always on my desk. This is reality, not a threat,” Kim said during a televised New Year’s Day speech.
Source: SMH

So, here’s a question for the Press, Hollywood, Politicians and the Late-night hosts.

The bellicose little manlet was threatening the stability of the whole world on New Year’s Day. (Despite the fact that one of his tested missiles landed practically on his own head.)

Trump’s made it clear that we WANT peace, but are — quite seriously — preparing for war.

Then, a week later… he’s opened talks with South Korea for an amazingly historic Olive branch.

Aside from Trump calling his bluff, what changed?

If this leads to the resolution of a war that started 78 years ago, and never officially ended, should Trump’s name be under consideration for a Peace Prize?

Isn’t the outcome of peace more important a consideration than whether the players were ‘polite’ in how they got there?

After all, even the Nobel Prize committee regrets the one they gave the LAST President. The man helped Hezbollah, freaking Hezbollah!
Clash Poll: Should Helping Hezbollah Cost Obama His Peace Prize?

At least this time, there’d be an accomplishment to hang it on, before awarding it.

Black Woman Punches White Cop In the Face, Then A Black Cop Knocks Her to the Ground
May 30th, 2020 Flag And Cross

Kayleigh McEnany Steamrolls Jim Acosta: ‘If Anybody Needs To Be Fact-Checked, It’s The Media’
June 1st, 2020 The Mental Recession

John Cusack Prods Protesters to Continue Until Trump ‘Flies Off’ in Helicopter
May 30th, 2020 Liberty Hub