Jim Acosta was completely horrified that this sort of thing could happen in the United States. He didn’t seem to realize that his complaint against the President revealed his own elitist bias.

On Tuesday, Jim Acosta, the White House Correspondent for CNN and alleged ‘journalist’ was booted out of the Oval Office for badgering the President with racially charged questions.  It was supposed to be a photo-op and quick presser with President Trump and the President of Kazakhstan, but CNN’s Jimmy Acosta couldn’t resist an opportunity to slander President Trump over the alleged ‘sh*thole’ comment and imply that he’s racist.

Even if President Trump did say ‘sh*thole’ countries, he’d be in good company.  Check out Doug’s video and learn why:

But now back to Jimmy and his outburst.

This isn’t the first time that Acosta has been belligerent with President Trump.

It’s what got CNN labeled ‘Fake News’ in the first place:

Here he is being obnoxious again on Tuesday:

Acosta has made a habit of grandstanding and interrupting when Trump and his surrogates are available to the media. Tuesday was no exception, as Acosta yelled, “Mr. President,” three times before finally getting Trump’s attention.

“I want them to come in from everywhere… everywhere. Thank you very much everybody,” Trump responded as Acosta continued to bark questions.

“Just Caucasian or white countries, sir? Or do you want people to come in from other parts of the world… people of color,” Acosta shouted.

Trump then pointed directly at Acosta and simply said, “Out!”

The President had enough.  Imagine having to endure that day after day.  And the knowledge that you’ll have to endure it for the duration of your term.  It’s not like Jim Acosta is the only one — ALL of the Media (D) has been incredibly hostile to President Trump.  Newsbusters recently reported that in President Trump’s first year in office, the coverage has been 90 % negative.

Do you blame him for reacting to Acosta’s antics?

Today, the president of the United States told me to get “out” of the Oval Office when I tried to ask about his comments about “shithole countries.”

Doesn’t President Nursultan Nazarbayev look uncomfortable?  Wouldn’t you be?  It’s like being around a married couple arguing.

How does this help our international reputation if the American Media (D) is pitted against the President at a photo-op?

Remember, Jim Acosta isn’t supposed to be giving commentary, shape the news, or be the news — he’s supposed to be a reporter.  Essentially a tape recorder that asks clarification questions.  Is that what he’s doing?

Or is he trying to push a particular ‘The President is Racist’ narrative?

Is it appropriate to bring up the ‘sh*thole’ comments and the surrounding bruhaha at this particular event?

Acosta thinks it is.

Like so many others in the Media (D), he’s just an arm of the Democratic Party constantly attacking this President.

Jim said that he didn’t expect to be kicked out for unruly behavior in America… and that, my friends, shows his bias.  He thinks that some other countries are sh*tholes.

He doesn’t want governmental control over the media (like they have in sh*thole countries).  He wants to be free to have a one-party Media (D) that ignores half of the country and thinks that they’re racist, sexist, homophobic, xenophobic bigoted ‘deplorables’.

Look around the world and check out the countries that have government control over the media. They are not places where you want to live.

And hey, Jimmy would know.  His dad, like many others, escaped from the sh*thole that is Cuba.

Here's the passport my dad was issued when he left Cuba in 1962. He's never been back. He and my grandmother made a new home in Northern Virginia, right outside DC. I wouldn't be here today had it not been for their courage.

Jim and his dad went back in December 2016 to reunite with family and see the  sights.

Today my dad and I hugged relatives he had not seen in more than half a century. He left in '62 at the age of 11. But our relatives remembered him right away. They yelled out his nickname… "Abilito…" #returntocuba

Today we returned to my dad's home town of Santa Maria del Rosario outside of Havana. He saw the church where he was baptized and served as an altar boy. For my dad, it was like traveling back in time. This was the boyhood home he had to leave behind. #returntocuba

Jim was also in Cuba in March 2016 when Obama was softening the American stance on Communist Dictatorships. 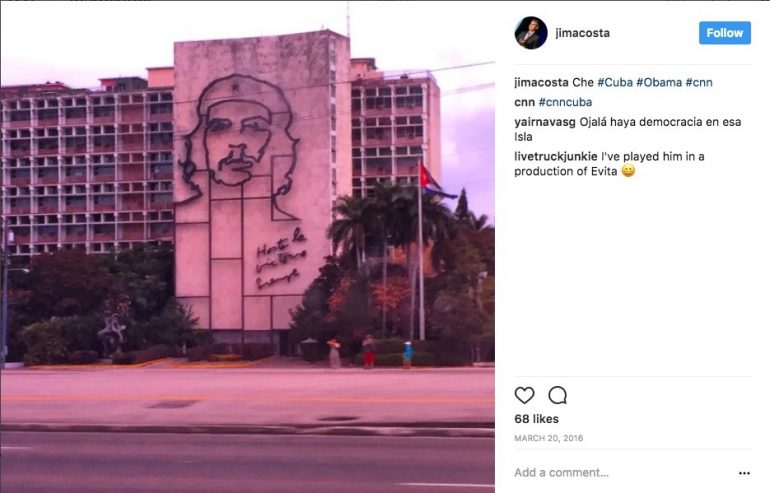 So, Acosta’s constant moral preening falls pretty flat when you realize that he thinks that America should be better than sh*thole dictatorships.

How do the crazy liberals handle the wussification and cognitive dissonance required to maintain their worldview?

DEAR CNN: Fox News Got Beat Up By BHO For 8yrs – It’s YOUR Turn NOW!

Dear America: Should CNN’s Acosta Apologize To Trump For Being A Whiny B-TCH?

Mainstream Media Reported On Armed Woman Pulling Her Gun On BLM Provocateur – But They Didn’t Present The Entire Truth – Here It Is
July 4th, 2020 DC Clothesline