Could that ‘election tampering’ investigation be looking in the wrong direction? Doesn’t a tactic like this poison the entire Democratic process?

Could it be that this was the Left’s strategy from the beginning?

We know that some Trump accusers were trotted out as an October Surprise.

We know they were connected to Gloria Allred and her daughter, Lisa Bloom.

Email transcripts have been uncovered showing how eager Lisa Bloom was to act on this accusation BEFORE the election — and how even one of the accusers complained about Bloom using her to make political hay.

“Ok let’s not do this then,” Bloom responded. “We are just about out of time anyway.”
Related story here

And now… we know something else. We know just how motivated DNC backroom dealers and bundlers were to use a political hit piece to secure the election.

One of Hillary Clinton’s wealthy pals paid $500,000 in an unsuccessful effort to fund women willing to accuse President Trump of sexual misconduct before the 2016 election, The New York Times reported Sunday.

Susie Tompkins Buell, the founder of Esprit Clothing and a major Clinton campaign donor for many years, gave the money to celebrity lawyer Lisa Bloom who was working with a number of Trump accusers at the time, according to the paper’s bombshell report.

Bloom solicited donors by saying she was working with women who might “find the courage to speak out” against Trump if the donors would provide funds for security, relocation and possibly a “safe house,” the paper reported.

Supposedly, the money (minus unspecified ‘expenses’) was eventually returned, after they failed to nail the Donald.

Why is this story a big deal?

Team Hillary’s scorched-earth politics have managed to “stick it” to victims yet again.

If we have a known history of the Left exploiting accusations for political gain, it gives the public just cause to be skeptical of victims coming forward to complain of harassment or abuse.

This is what happens when you weaponize tragedy or criminality for personal gain. It paints the public into a corner, forcing us to be slow to hear, slow to believe and slow to support them.

Doesn’t really line up with THIS famous Tweet, does it? 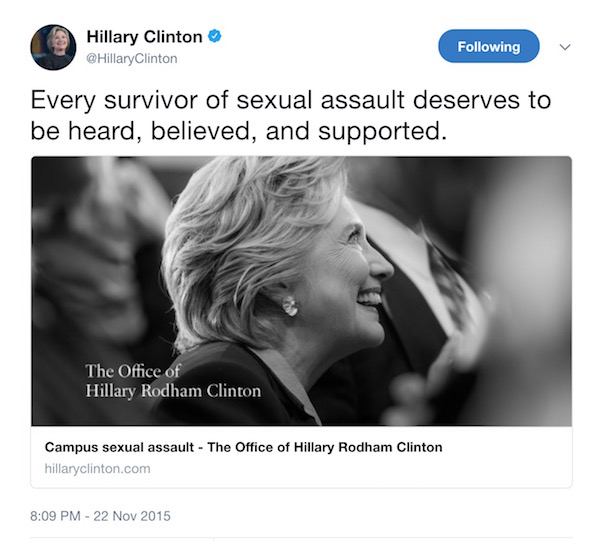 But she never did ACTUALLY care about the victims.

Not when Bill was President (or Governor).

For the Left, victims are currency they can spend as a path to power.

They have shown themselves more than willing, but EAGER to sink to that level.

Which means we need to be on guard against sketchy ‘October surprises’ in Every Single Election from now on. ESPECIALLY if they can be connected to Gloria Allred or Lisa Bloom.

It sucks, but hey, welcome to the ‘new normal’.

Hillary just might be ‘The Beast’ from the Book of Revelation.

If you think so, have we got the shirt for you.

Beware of the Hildebeest

Elon Musk Panics Over Discovering 90% Of Twitter Users Are FAKE Spambots – We Could’ve Told Him That!
May 20th, 2022 Sons of Liberty Media

HUGE stockpiles of baby formula found at the border, proving the shortage was ENGINEERED by the White House to punish and starve America’s babies
May 20th, 2022 DC Dirty Laundry