This is unbelievable! Could any other company get away with this?

James Damore, the Google engineer that was fired for a (quite reasonable and what used to be called ‘centrist’) memo saying that men and women often have different motivations, denouncing the ‘gender gap’, and endorsing a hiring based on merit rather than on minority group quotas, appeared on Tucker Carlson’s show to discuss a lawsuit he has filed against the company for discrimination.

Google employees are pretty open and unapologetic within the company of their bias. Google is willing to not only blacklist conservative white men from their company with the aforementioned non-merit-based quota systems but, if they somehow do get hired, they’re willing to make it near impossible for them to get a job within the technology field if they step out of line like Damore did.

Damore claims that Google employees were paid a bonus for speaking out against him.

The lawsuit describes a corporate culture in which managers and employees alike conspire to stifle conservative views and retaliate against conservative employees, while implementing race and gender based hiring and advancement criteria that may be unlawful.

Damore was fired in August 2017 for disseminating a memo critical of the ideologies that prevail among most Google employees and managers. The document attracted significant press attention.

“Portions of the memo violate our code of conduct and cross the line by advancing harmful gender stereotypes in our workplace,” Google CEO Sundar Pichai wrote in a company-wide email that attended his termination.

Google says that it is ‘looking forward to’ defending against Damore’s lawsuit.

This is truly a David vs Goliath battle — and it’s for all of our freedom.

The lawsuit claims that Google is an ‘ideological echo chamber’ that is a ‘bubble of groupthink’ that created a hostile environment due to the open threats and harassment to those that are outside of their leftist ideology.

Google employees and managers strongly preferred to hear the same orthodox opinions regurgitated repeatedly, producing an ideological echo chamber, a protected, distorted bubble of groupthink. When Plaintiffs challenged Google’s illegal employment practices, they were openly threatened and subjected to harassment and retaliation from Google. Google created an environment of protecting employees who harassed individuals who spoke out against Google’s view or the “Googley way,” as it is sometimes known internally. Google employees knew they could harass Plaintiffs with impunity, given the tone set by managers — and they did so.

The lawsuit gives detail to the harassment endured by Damore.

Damore’s lawsuit elicited intense antagonism from the ranks of Google employees, who style themselves “Googlers,” in internal communications. Googlers in upper management allegedly shared this vitriol. One Google director, George Sadlier, sent a mass email Aug. 3, 2017 condemning Damore as “repulsive and intellectually dishonest.” He went on to promote posts threatening violence against Damore.

A torrent of belligerent communications followed the email. One Google engineer named Alex Hidalgo sent Damore a message the following day, promising to “hound him” until corporate leadership intervened.

“You’re a misogynist and a terrible person,” the message read. “I will keep hounding you until one of us is fired. Fuck you.”

And here’s more of the vitriol that was posted on internal Google message boards accessible to all Google employees: 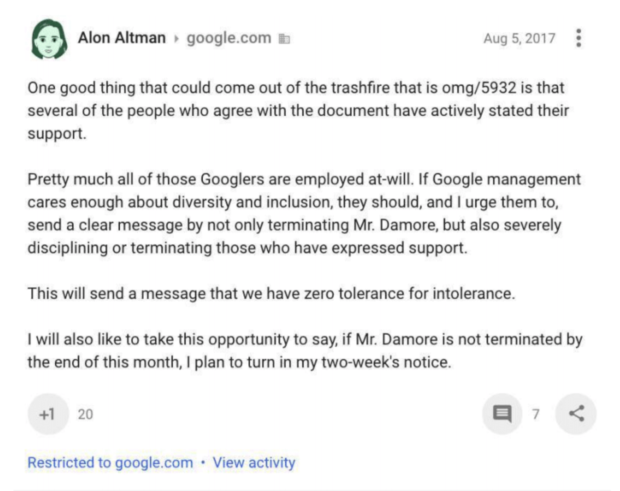 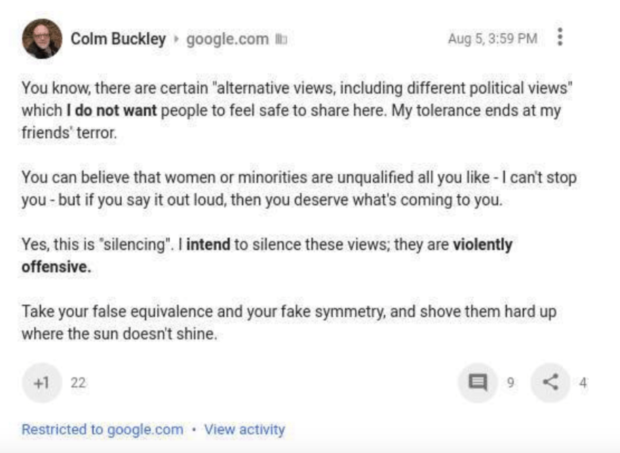 One unnamed Google employee tried to allow a permissive political environment at Google and was reprimanded.  Here are his ‘offensive’ remarks: 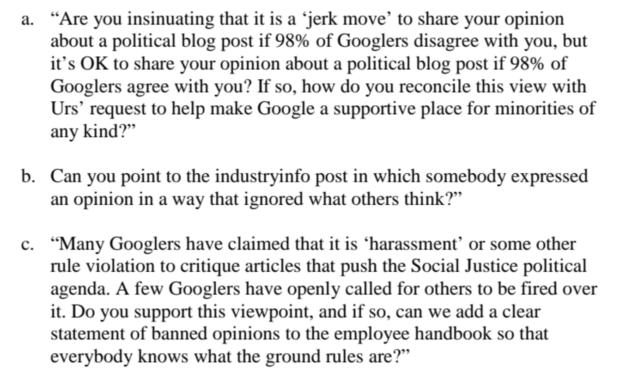 Several employees were apparently awarded “peer bonuses” for disparaging Damore’s views. A “peer bonus” is one of Google’s peer-to-peer recognition systems, through which employees recognize one another for exemplary work with small cash bonuses.

The lawsuit cites one such bonus, in which an employee named Matthew Sachs recognized a colleague named Simone Wu for “speaking up for googley values and promoting [diversity and inclusion] in the wretched hive of scum and villainy that is [Damore’s Memo].” The Google Recognition Team approved the bonus.

The bias in Google is terrifying when considering their near-monopoly status as the filter by which we gather our information, not to mention the owning of our email and internet searches.  They’ve used this for marketing, but how long before it’s used to target conservatives?  They’re cool with that within their company culture, why not in the culture at large?

Google’s liberal bias is manipulating searches to give us one particular view — and it’s on the left.

Google, the most powerful search engine in the world, is now displaying fact checks for conservative publications in its results.

And not only is Google’s fact-checking highly partisan — perhaps reflecting the sentiments of its leaders — it is also blatantly wrong, asserting sites made “claims” they demonstrably never made.

When searching for a media outlet that leans right, like The Daily Caller (TheDC), Google gives users details on the sidebar, including what topics the site typically writes about, as well as a section titled “Reviewed Claims.”

Vox, and other left-wing outlets and blogs like Gizmodo, are not given the same fact-check treatment.

When searching their names, a “Topics they write about” section appears, but there are no “Reviewed Claims.”

They are literally filtering and framing the news — just like the rest of the Media (D).

They want to shape the worldview and tilt it left.

Is Google Too Big And Too Powerful?

Orwell was right — Big Brother is watching, and his name is Google.

Read these related ClashDaily articles and get back to me:

BUSTED: Google’s ‘Left-wing Bias Has Alienated Its Own Workers’ – Is It Time To Boycott Google?

Anti-Trust: Google Punishes Conservatives – Here’s Why It Should It Be Regulated

Google This: Google Hit With $2.7B Fine For ‘Manipulating …

REALLY, GOOGLE? Every Event Is Commemorated EXCEPT For THIS One…

OPERATION CHOKEPOINT: Google’s Internet Censorship BITES Them In The ASSETS

BROWSER BIAS: This Explains Why GOOGLE Seems So Damned Political