He’s got something to say about Shootings. And Republicans. It’s absolutely wrong, but that’s never stopped him before.

Van Jones. Do you remember him?

He’s the CNN Talking head that gave us the term ‘Whitelash‘ after Trump was elected.

Because for some people, everything needs to be viewed through a lens of race, politics or both.

And rather than taking a sober look at what factors — including red flags missed by authorities, mental health considerations, the rise of social media and our national obsession with a cult of celebrity etcetera, etcetera — might be contributing to the trend of gun violence in schools, Van Jones turned it up to eleven.

In typical ‘journalist’ fashion, he uncritically accepts as true anything negative about his political enemy. And boy, do we ever mean ‘enemy’!

He’s not even pretending to be rational when he’s retweeting this one.

Should that really surprise you? An Obama flunkie going ‘political’?

Yes, he once worked as Obama’s ‘Green Jobs Czar’… until people learned about some skeletons in his political closet.

Jones was under fire for his past affiliation with the 9/11 conspiracy “truthers” and for calling Republicans “a**holes” in a video before he was appointed to the Obama administration. Republicans had also begun using him to escalate criticism of the administration’s deployment of czars across the policy landscape, saying that they were being used to avoid Senate scrutiny of appointees.

…Jones’ roots in radical politics, and a spate of newly surfaced links Saturday documenting his advocacy for convicted cop killer and former Black Panther Mumia Abu Jamal — a death row prisoner who many in the activist left view as an unjustly convicted political prisoner — threatened to play into that narrative, which reached new heights this week when the chairman of the Florida Republican Party challenged the President’s plan to speak to schoolchildren across the country as part of a plot to “indoctrinate” them in “socialism.”
Source: Politico

This is the kind of employee CNN likes to showcase, apparently.

Mr. Jones was arrested during the rioting in Los Angeles in 1992 that followed the acquittal of the police officers who beat Rodney King. Mr. Jones spoke of that experience in a 2005 interview with a newspaper in the San Francisco Bay area:

“I was a rowdy nationalist on April 28, and then the verdicts came down on April 29,” he told the East Bay Express. “By August, I was a communist.”

Mr. Jones attributed his conversion to the people he met during his incarceration:

“I met all these radical young people of color, I mean really radical, communists and anarchists,” he told the East Bay Express. “It was like ‘this is what I need to be a part of.’ I spent the next 10 years of my life working with a lot of those people I met in jail, trying to be a revolutionary.”

Mr. Jones was arrested again in 1999 during the anti-free trade riots in Seattle.

In 1994, Mr. Jones was one of the founders of STORM, a Marxist-Leninist group whose hero was Chinese Communist dictator Mao Tse Tung.
Source: RealClearPolitics

Ten years of ‘playing revolutionary’ prepared him for a position in the Obama administration… and CNN.

THAT is the guy who is retweeting posts like this one: 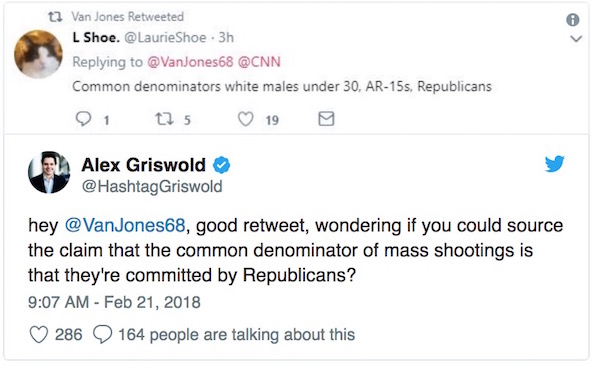 The post he re-tweeted was the kind of crap CNN has reduced itself to. In case it was too small to read:

That used to be called ‘profiling’, right? Isn’t that a no-no?

Besides us not actually knowing the political affiliation (if any) of quite a few shooters, and that their motivations are not always clear — you had no trouble broad brushing them all as white Republicans because doing so served your political objectives.

Not that we should expect the truth from a Maoist. But you might want to run your theory past, say, Scalese. He might point you to someone who doesn’t exactly fit your profile… since he was specifically trying to murder Republicans. (A very ‘Marxist revolutionary’ thing to do, isn’t it?)

Here’s a photo to help give Van Jones some perspective. (Source here) 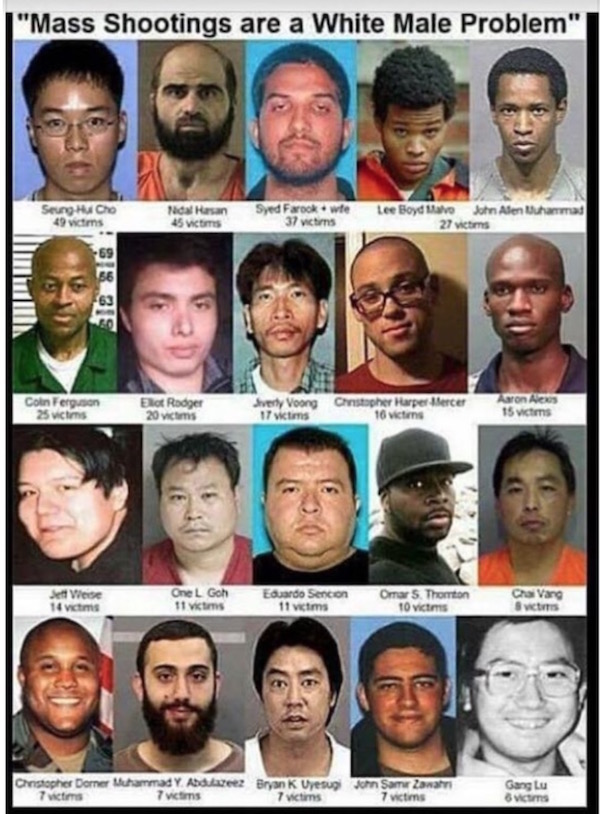