Most kids dream of excelling in their chosen career. This guy had a much darker goal.

‘Troubled’ childhood? Sure. But he’s not the only kid to have suffered loss. And most people don’t react like this.

“I’m going to be a professional school shooter”

And for once, the ‘if you see something, say something’ worked the way it was supposed to… at least, at first.

Last fall, a Mississippi bail bondsman and frequent YouTube vlogger noticed an alarming comment left on one of his videos. “I’m going to be a professional school shooter,” said a user named Nikolas Cruz.

Agents with the bureau’s Mississippi field office got back to him “immediately,” Bennight said, and conducted an in-person interview the following day, on Sept. 25.

“They came to my office the next morning and asked me if I knew anything about the person,” Bennight told BuzzFeed News. “I didn’t. They took a copy of the screenshot and that was the last I heard from them.”
Source: Buzzfeed 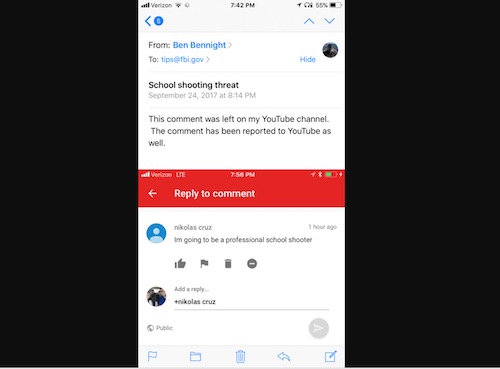 The real question is what happened between that day and now?

The FBI was warned. But according to news reports, local police were not.

Our own Doug Giles weighs in on the issue, here:

Some other students echoed that opinion when interviewed.

“Everyone predicted it,” one told WFOR-TV.

But police said they were not warned of any possible attack by Mr Cruz.

“Potentially there could have been signs out there. But we didn’t have any warning or phone calls or threats that were made.”
Source: BBC [emphasis added]

Did the FBI do all it could do in light of his threats and history?

He ‘passed a background check’ for his guns.

Is there a step on the prevention side that could have saved these lives — without stripping legitimate citizen rights?

Is there some sort of an extended gun ownership approval wait period — maybe a year or more — that could be applied in a situation where specific red flags are triggered?

Is our best option be to turn schools into ‘hard targets’ were trained people on staff have the means and training to put down a threat to the students in their care even before the police can arrive on scene?

It’s a problem with a lot of moving parts if we’re going to figure out a solution.

Have any thoughts? That’s what the comment section is there for… maybe readers like ours can come up with some commonsense solutions in a time when politicians are coming up empty.