You might say the World’s Youngest Billionaire is having ‘a bad day’.

When the stock graph is almost vertical to the red, that’s not a good thing — at all.

Buying those full-page ads in NYT and other big papers to say ‘I’m sorry’ Mea Culpa didn’t seem to have helped.

Facebook is taking a hit in right in the reputation. They can’t afford to coast on being ‘cool’ anymore.

Especially now that the FTC is involved. 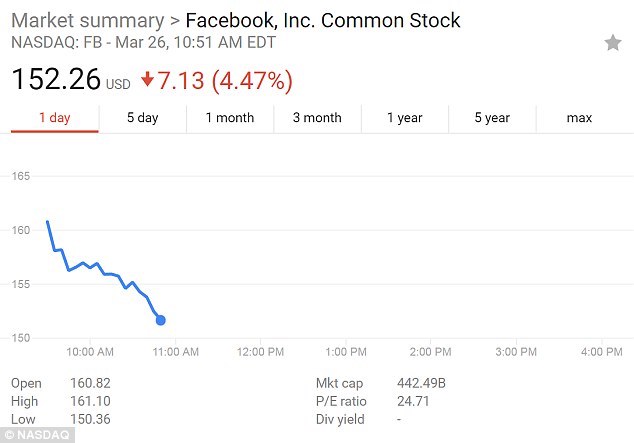 Ouch. That’s ugly. And it’s likely to get worse from there.

The Federal Trade Commission has an open investigation into Facebook’s growing privacy scandal, it revealed Monday.

The regulator’s acting director, Tom Pahl, made the announcement in a statement which immediately send Facebook’s share price plunging.

He also raised the prospect of a massive fine for Mark Zuckerberg’s social network because it had entered into a consent decree in 2011 about the use of personal data and any breach of that can be punished by the regulator.

If the FTC finds Facebook violated terms of the consent decree, it has the power to fine the company thousands of dollars a day per violation, which could add up to billions of dollars.
Source: DailyMail