You thought we had a problem with effeminate soy-boys before? Well, we ain’t seen NOTHING yet!

They’ve come up with a birth control pill for men.

They’ve run a test, and their preliminary data suggest the pill is both ‘effective’ and ‘safe’. Here’s how they described it:

The research, presented at the Endocrine Society’s annual meeting in Chicago by researchers from the University of Washington in Seattle, studied 83 men between the ages of 18 and 50. The participants’ testosterone levels dropped significantly along with two hormones essential for sperm production.
Source: USA Today

Just what we need, even MORE emasculation of American masculinity.

Did people not get that key lesson out of Jurassic Park?

Remember how everyone wanted BPA to be banned? Does anyone still remember why?

It’s because BPA was a hormone disruptor. (Which is what this birth control pill is.)

BPA is an endocrine disruptor.

It can imitate the body’s hormones, and it can interfere with the production, secretion, transport, action, function, and elimination of natural hormones.

BPA can behave in a similar way to estrogen and other hormones in the human body.
Source: Medical News Today

That same article pointed to concerns about medical side effects including heart disease, diabetes, breast and prostate cancer. That’s not even getting into the more obvious Low-T issues, including obesity and sexual performance.

While the actual medical implications of products with BPA have been contested, whether the levels were significant enough to cause significant harm to the body, the Pill is different.

And before we DELIBERATELY start making men LITERALLY LESS quintessentially male… we might want to sort out what the hell is already going wrong with testosterone levels.

What, is this the first you’ve heard of it? Have you not seen any pink ribbon campaigns to raise awareness about this issue? Probably not.

During the past two decades, testosterone levels in American men have rapidly declined.

This information comes from a long-term prospective study that evaluated changes in serum testosterone on a population-wide basis.
Source: Healio

A more recent study was looking at testosterone, too.

If approved, you can expect a lot more photos like these. 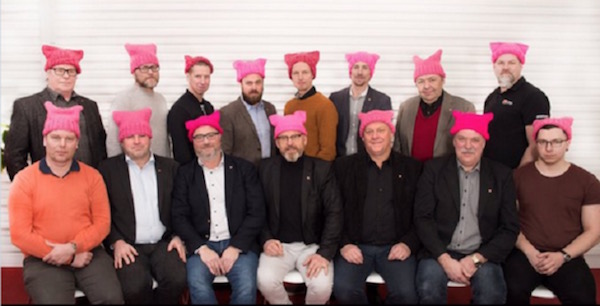 But it brings up the ironic question: will any of the — uh, ‘men’ — who take this pill actually NEED the benefits of it?

Or will their Testosterone drop so low that no self-respecting woman would be drawn to them… even if it somehow doesn’t disrupt their drive and performance?