It’s an American Success story, but it doesn’t play by their rules, so they hate it.

In Hollyweird, they have done away with cowboys in white hats and black hats. Good guys and bad guys are identified in a whole OTHER way now. Good guys are ‘progressives’ who have to explain the world to knuckle-dragging Republicans.

Roseanne doesn’t follow those rules.  And it’s led to some HUGE early success.

Roseanne made a triumphant return Tuesday night, blowing past projections with a 5.2 adults 18-49 rating and 18.2 million total viewers for the debut of its revival, which drew 10% more viewers than the original series finale 21 years ago.
Source: Deadline

Maybe this has something to do with it: On her show are no ‘good guys’ and ‘bad guys’. It’s just a great big mash-up of a blue-collar dysfunctional-but-loving family. There is a wide variety of ideas represented, and that’s just part of life.

If you have more than one or two people in your family, this formula probably sounds familiar.

Roseanne’s character is entirely loveable, and yet, she’s a big supporter of Trump and his policies.

The tone of the show even SOUNDS like real people you might know. Good-natured ribbing people over our differences, without being malicious about it. Loving and laughing, and figuring life out together. (If you don’t know good-natured ribbing, google it. It’s what we had before everyone was so damned ‘offended’ about everything.)

It’s a fun, irreverent show that engages with the kind of real issues life can throw your way.

That was what made it successful in the first place. How did the left half of twitter react? Was there any doubt? It’s got a pro-Trump title character. 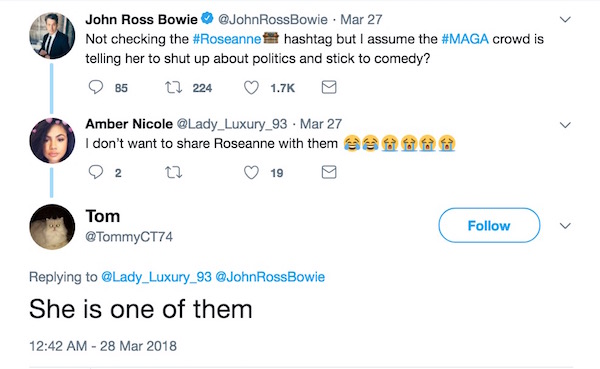 She’s ‘one of them’. Oh, nice. Remember when your side used to say that the ‘othering‘ of people was a great social evil? So why are you doing it? But some people ‘got’ what the show was about.

People, calm down… if you actually watched #Roseanne tonight you would have noticed that there were jokes made about Hillary supporters AND Trump supporters. It was hardly one-sided or “pro-Trump.”

I feel show depicted the reality of a family with different political views.

Lighten up, people. In the words of (Iowahawk) David Burge