Look how brazen have the ‘swamp critters’ have become. Have you been paying attention?

Remember how the IRS was weaponized against political rivals? (But they said sorry, so it’s ok, right?) Nobody went to prison for that.

What about Fast & Furious?

We’ve got a dead American, and our ‘AG’ Eric Holder was held in contempt of Congress.

And that brings us to the point of the meme: 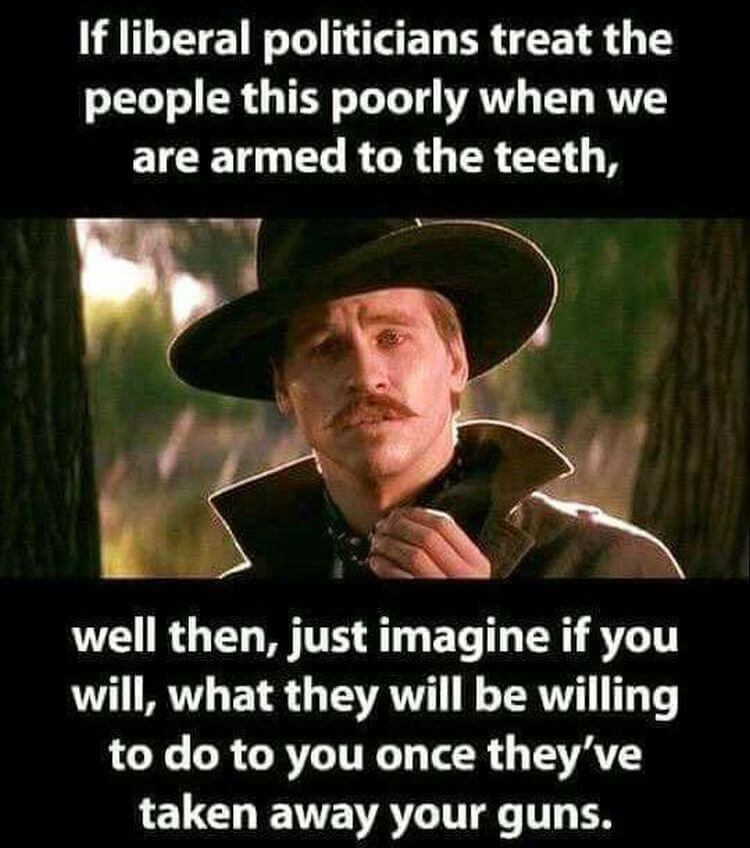 If we’re already seeing the DOJ stonewalling Congress over subpoenaed documents, or the monitoring of private conversations between private citizens… if we’re seeing leaks and illegal ‘unmasking’, what do you think they’d try to get away with if the guns were gone completely?

Here’s what they’re up to now:

“Ammunition sales should be subject to the same legal requirements as firearm sales, and that includes instant background checks. …Closing this ludicrous loophole is a common sense component of a comprehensive strategy to reduce gun violence,” Blumenthal said.

Wasserman Schultz added that it is “common-sense legislation” that would close an “absurd loophole.”
Source: FederalistPapers

Yeah. Just what we need. The government tracking who has how much ammo.

How could that possibly go wrong?

Great assurances were given as recently as 2012, when BBC was pleased to tell this story:

Until now, anyone with a gun permit could buy arms from a private company.

Under the new law, only the army, police and certain groups like security companies will be able to buy arms from the state-owned weapons manufacturer and importer.

The ban is the latest attempt by the government to improve security and cut crime ahead of elections in October.
Source: BBC

There were 18,000 murders in their country, and the capital was one of the world’s most dangerous cities.

One member of the public in Caracas told the BBC: “They’re killing people every day. This law is important but they need to do more, they’re not doing enough now.”
Source: BBC

Did you catch the reference to Caracas? Yes indeed. That was Venezuala, 2012.

That happened only a year after Bernie Sanders wrote this embarrassing quote on his Senate website in 2011:

These days, the American dream is more apt to be realized in South America, in places such as Ecuador, Venezuela and Argentina, where incomes are actually more equal today than they are in the land of Horatio Alger. Who’s the banana republic now?
Source: Bernie Sanders Senate Website

How has everything worked out since then?

2018 was not a good year for them. They were eating stray animals, and the animals from the zoo. Their hospitals ran out of supplies. And the democratic process itself seems to have ground to a standstill:

If they had the benefit of knowing how things would work out, given a chance to reply ‘from my cold dead hands’ to that 2012 order … do you think Venezuelans would want to stand their ground? Or do you think they’re happy with a non-represontational government?