Back to Clinton plan A. When caught doing something stupid, lie your face off.

Hillary’s gaffe-ridden trip to India was a disgrace. Her two falls on the stairs (and fall in the tub where she broke her wrist, but she’s in ‘excellent health’, ask anyone) were overshadowed by the sheer stupidity of her statements abroad.

Even Democrats are embarrassed by how far she’s taking this. It was her ‘Deplorables’ mistake all over again. She is incapable of learning from her mistakes.

She made entirely indefensible statements about Trump…

“His whole campaign: ‘Make America Great Again’ was looking backwards,” she told attendees at India Today: Conclave 2018. “You know, ‘You didn’t like black people getting rights? You don’t like women, you know, getting jobs? You don’t want to, you know, see that Indian American succeeding more than you are? Whatever your problem is — I’m going to solve it.”
Rest of story, including the irony of her making that staement in a country with a Caste System, here: Clashdaily

She followed that up with a ludicrous statement about American women…

“We do not do well with white men and we don’t do well with married, white women,” Clinton said at a conference in Mumbai, India. “And part of that is an identification with the Republican Party, and a sort of ongoing pressure to vote the way that your husband, your boss, your son, whoever, believes you should.”
Source Fox

Can you imagine if she had said something so inflammatory about that pressure happening in Islamic communities, some of which do not permit a woman even to leave the house without a male chaperone?

This from the woman who not only stayed with a philandering husband for political reasons, but also defamed the women who accused him of wrongdoing.

Hillary took to Facebook to deflect the heat she’s taking.

During an interview last week with an Indian news publication, I was asked about 2016, and whether Trump is the "virus"…

It had all the authenticity of apologies we’ve all heard from arrogant SOBs that start an apology by saying they are sorry if anyone was too stupid to understand what they really meant and were offended by it, but let me dumb it down for you all…

My first instinct was to defend Americans and explain how Donald Trump could have been elected. I said that places doing better economically typically lean Democratic, and places where there is less optimism about the future lean Republican. That doesn’t mean the coasts versus the heartland, it doesn’t even mean entire states. In fact, it more often captures the divisions between more dynamic urban areas and less prosperous small towns within states. As I said throughout the campaign, Trump’s message was dark and backwards looking. I don’t need to list the reasons, but the foundation of his message, “Make America Great AGAIN” suggests that to be great we have to go back to something we are no longer. I never accepted that and never will.

Let’s take a look at the counties she really means in that swipe she took: 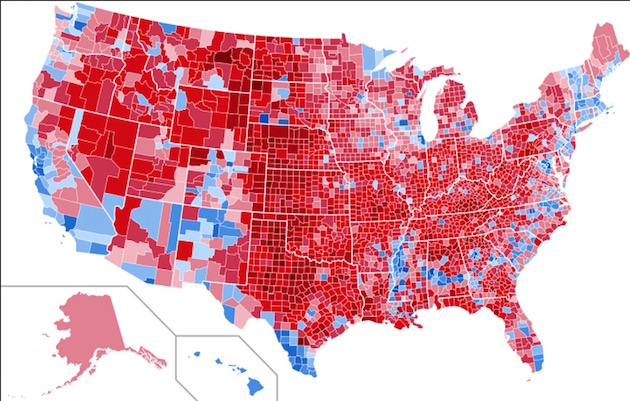 If your slice of America is red? She meant you.

She made the enormous mistake of dividing America into ‘good guys’ and ‘bad guys’. Maybe she yet hasn’t figured out that a lot of those same ‘bad guys’ voted in POTUS44 last time around. It’s not America… it’s HER.

Did winning the coasts, and writing off the heartland as ‘a basket of deplorables’ help her election bid any?

She couldn’t even find Wisconsin on a map with both hands and a flashlight.

I was also asked about women, specifically white women, the majority of whom have not voted for Democrats in recent history. I did better with them than previous Democratic nominees, but still lost them overall to a candidate who relies on scare tactics and false attacks, masking the fact that he is otherwise no friend to most Americans.

Scare tactics and false attacks? Are you saying women are gullible? You’re not making this better. And as for ‘false attacks’… how about that one about Trump ‘not wanting’ blacks to have rights or women to have jobs. Trump, the very next day, had nominated the first woman to head up the CIA. And a man who grew up in poverty is now Secretary of HUD.

Where were we? Oh, right.

How she wasn’t REALLY saying little white wifey looks doe-eyed at her husband or father and says, aw, shucks. I don’t have a clue WHO I should vote for… what do YOU think?

You’re more likely to find a real unicorn eating out of your garbage can than you are to find women like that.

I also mentioned something in passing that’s gotten a lot of negative attention: that there is anecdotal evidence and some research to suggest that women are unfortunately more swayed by men than the other way around. As much as I hate the possibility, and hate saying it, it’s not that crazy when you think about our ongoing struggle to reach gender balance – even within the same household. I did not realize how hard it would hit many who heard it. I was out there having a conversation, and this was one piece of a larger point about how Democrats need to do better with white women, because I know in my heart that Democrats have much more to offer them. Do I believe that some women look at a powerful woman and question whether she can lead, maybe voting for the man their husband is voting for instead? It may not be universally true or easy to hear, but yes, it’s a dynamic still at play in our society. I know this because even I spent parts of my life wondering if I could achieve the same as male leaders, and a lot of that insecurity stemmed from my gender and how society views women. When I was serving in various roles in public life, I was always more popular when I was working for or defending a man then when I was out there on my own. That’s the point I was making, in an effort to explain to an audience some of the many dynamics that have gone into these tumultuous last few years.

Could it occur to her that maybe — just maybe — the sort of women that settle down and start a family aren’t really impressed by Hillary and her ‘values’? That they are actually drawn to the traditional values she’s working so hard to tear down?

But, like we said in the last column on the topic — we looked at the job requirements and decided that you, as a lying, conniving, blameshifting sack of unprintable expletives, were unfit for the position. So we hired someone else to do the job.

Feel free to take it personally. We didn’t care for your mental state.

This is a badass shirt, but guys aren’t the only ones that want to shout out THIS
message.

Is it just me, or is Hillary Clinton mental? In her recent, horrendous book, she blamed
everyone from the moon and back for her loss in the 2016 Presidential election. She
blamed Trump, hard-working Americans, sexism, self-hating women, news outlets, the
ones that aren’t full of leftists, voter suppression, Russia, her own campaign staff, the
DNC, campaign finance laws, the Electoral College and more. Crazy how she forgot the
part that she’s a liar, she’s mental, and no one likes her.
So, rock on without her America, and get this fantastically hilarious shirt, which proclaims
just how mental Hillary Clinton really is today!