This Parkland Survivor shared the story of his flight on Twitter and the airline responded. Check it out…

We’ve profiled Kyle Kashuv before on Clash, as you can see here.

He doesn’t fit the mold of the other Parkland activists — Kyle is a conservative, pro-Second Amendment, and a supporter of President Trump. He’s also intelligent, articulate, and driven.

That’s why he’s not constantly profiled in the Media (D) and invited to speak.

He’s also not being used by gun-grabbing leftists:

He was on his way back to Washington when a stewardess on his flight to Baltimore decided to give a speech on the March For Our Lives and made everyone clap.

Spirit airlines has been forced to apologize to a Parkland school shooting survivor after he complained about a crewmember making a speech about banning semi-automatic rifles.

Kyle Kashuv, 16, survived the Valentine’s Day shooting at Marjory Stoneman Douglas High School in Parkland, Florida, and has been campaigning for gun reform since.

However, unlike many of his fellow survivors, he considers himself an NRA and Trump supporter and wants to protect the Second Amendment.

The Daily Mail says that Kashuv has been ‘campaigning for gun reform’ which makes it sound like he’s advocating for gun control, but that isn’t exactly what he’s been doing. He’s been calling for stricter background checks and mental evaluations.

‘Previously I believed that everyone under the Constitution should be allowed to have guns, but I now realize that not everyone should have guns and we should have way stricter background checks and mental evaluations,’ he said.

‘We need to a middle ground and have some reform.’

Kashuv is calling for bipartisan legislation, and has been meeting with Republican politicians in efforts to help protect what he believed to be the core of the second amendment.

He has met with lawmakers — both Democrat and Republican. He even got to meet the President and First Lady.

He’s been working for non-gun control solutions that would make schools safer. Kashuv has developed an app that allows troubled teens to reach out to their peers anonymously.

Kyle Kashuv was in the same building when the shooter opened fire on February 14, killing 17 people — this is unlike the gun-grabbing activists that are being used as pawns of the left.

Kashuv is calling for bipartisan legislation, and has been meeting with Republican politicians in efforts to help protect what he believed to be the core of the second amendment.

This has seen him clash with fellow survivors from the Parkland shooting, in particular the founders of the March for Our Lives who are calling for a blanket ban on assault weapons in the U.S.

Just landed in Baltimore on @SpiritAirlines and the stewardess felt compelled to give us all a speech about the March for Our Lives, which openly says on the petition are trying to categorically ban AR-15's, and made everyone clap.

Can anything just be non-political anymore?

While we appreciate that our Team Members are individuals, we don’t believe politics should be part of the Guest experience. We are looking into the incident and apologize to any Guests offended by these comments. 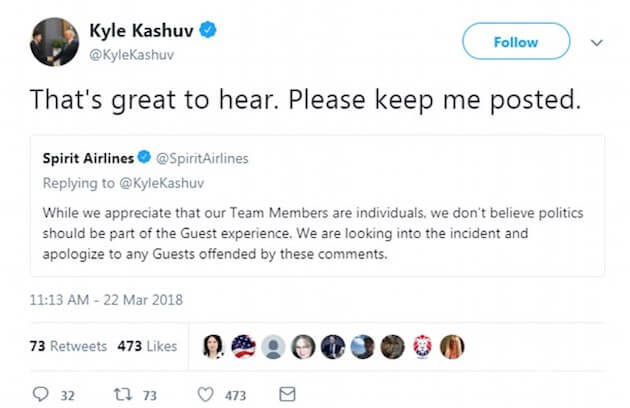 It has been overtly political for Kyle everywhere he goes.

Time Magazine recently profiled his gun-grabbing classmates on the cover of their magazine but left Kyle off of it.

.@KyleKashuv: "I don't know why I wasn't chosen – maybe because I don't fall into the category of gun control, of being anti-gun." https://t.co/qMtvmBjmqx pic.twitter.com/CqO1jhYNOX

No Media (D) bias there, right?

You go, Kyle. You’re doing an amazing job advocating for your position.