Franklin Graham has never been shy about speaking up at key cultural moments. So when a prominent atheist passed from life, he weighed in.

He did so with tact, and even maintained respect for Hawking, his accomplishments, and his own line of thinking.

World-renowned physicist Stephen Hawking died today at age 76. He once said, “I regard the brain as a computer which will stop working when its components fail. There is no heaven or afterlife for broken down computers; that is a fairy story for people afraid of the dark.” I wish I could have asked Mr. Hawking who he thought designed the human brain. The designers at HP, Apple, Dell, or Lenovo have developed amazing computers, but none come even close to the amazing capabilities of the human mind. Who do you think designed the human brain? The Master Designer—God Himself. I wish Stephen Hawking could have seen the simple truth that God is the Creator of the universe he loved to study and everything in it.
The Bible says, “You alone are the Lord. You have made the heavens, The heaven of heavens with all their host, The earth and all that is on it, The seas and all that is in them. You give life to all of them And the heavenly host bows down before You” (Nehemiah 9:6).
Source: Facebook

Hawking’s materialistic fans are investing his death with meaning by sharing images of him standing up out of his wheelchair and walking among the stars (essentially ‘becoming stardust’). 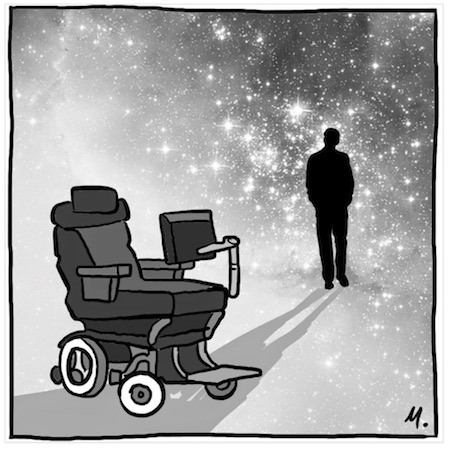 Franklin Graham went further than that. Our very existence, owing to a personal God who cares for us invests each of us with meaning.

We don’t have to ‘borrow’ significance and a mere ‘semblance’ of eternality by identifying with ‘stars’ or becoming stardust.

Franklin would point — as did his famous father before him — to Jesus Christ as the ultimate source of life and meaning. And he would point to faith in Christ, and his work on the cross as the way to embrace it.

There’s one thing that increasingly unites men and women. We can both agree that Liberals are losing their ever-loving minds. Now there’s a shirt that says just that.