Would they have promoted any Patriot like they did this guy?

There aren’t individual cops who make the wrong call or have dubious character. The entire ‘system’ is ‘rotten’.

It’s an old game that they’ve been playing for a very long time.

One ‘victim’ (with the help of being featured in the LATimes) has cashed in on a helluva payday. And just wait until you see his backstory.

First, here’s the “sob story” on his crowdfunding page:

Ismael Chamu is currently a 4th year studying sociology at UC Berkeley. His family has struggled in recent months to make ends meet. He currently helps support his two sisters, younger brother, mom and dad. He has to leave his current housing on the 13th. Money will be used to buy food, secure housing, and school supplies. Ismael is passionate about helping others, he was a co-founder and leader in social justice oriented clubs on campus like the Pre-Law Coalition for Social Justice and United Children of Immigrants. His family recently relocated to Hayward when his parents were no longer able to support themselves in Central California. Despite all of the barriers and hardship Ismael faces on a daily basis you will always find him with a smile.

The LA Times, as noted in the misleading ad, ran a story on him.

It was referring to the ‘plight’ of the ‘homeless’ student. This was the LA Times headline:

He attends elite UC Berkeley but lives in a trailer with no heat or sewer hookups. Soon, he’ll be scrambling to find new shelter

The article has him cooking breakfast for his sisters so they can walk to school ‘through gang territory’… etcetera. Very sympathetic. Would somebody PLEASE help the poor soul. blah, blah, blah. You’ve heard it all before.

There is one problem with that storyline:

His ‘social justice’ cause is Antifa.

You see, he’s upset at liberals. No, it’s not what you think. He loves their ideas and their causes. He just thinks they are losers who too prissy to go ‘all in’ to get what they really want.

Those of us familiar with history have known all along that Socialism requires revolution. Violence is baked right in. Again and again, small motivated groups have seized power over larger groups with no way to push back.

…On June 27th, 2017 Ismael was arrested with a knife in the same location and on the same night that 30 instances of slashed tires and graffiti occurred. After spending 39 hours in police custody he was released without charge where he immediately claimed that his arrest was the result of “racial profiling”. This was followed by an outcry of public support for Ismael and condemnation of the Berkeley Police Department. The ACUS Senate and even Berkeley Mayor, Jesse Arreguín, publicly condemned Ismael’s “unlawful detainment”.

Before he could delete them, the same site archived some of his social media posts, from just days earlier.

Here are their screen shots: 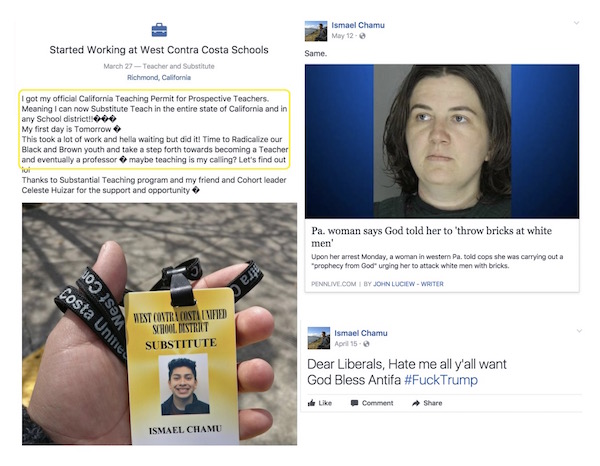 He also has a ‘teaching certificate’. How nice.

LATimes later made an edit to the story. But they were careful to soft-sell it. He was charged, he protests his innocence.

There’s your ‘nice guy’ for ya. “Private property must be destroyed”. He shared and agreed with ‘God told me to throw bricks at white men”. He was an open supporter of Antifa.

Of course, a NYTimes reporter had this to say about him:

Ismael Chamu is a remarkable young man. Please take some time to read this profile of a young man trying to escape poverty. https://t.co/KCDja8n3ZW

But keep calling Patriots out as thugs and ‘terrorists’. That’s where the ‘real’ reporting is.