During the National Walkout Day, thousands of students at the urging of the Women’s March Youth Empower (#Resist ✊), walked out of class for 17 minutes to push for gun control legislation.

Some pro-Second Amendment students also tried to balance the support for ending school shootings and their firm belief in the right to bear arms.

Which brings us to this chick that seems… well, confused. 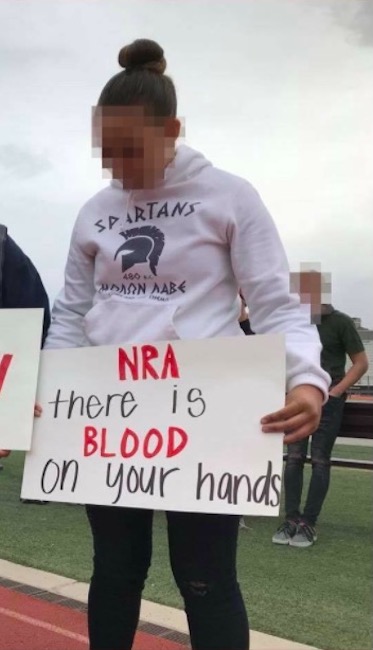 Here’s a closeup of her shirt: 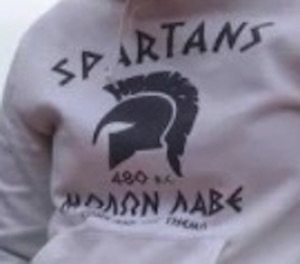 David Baker posted this ironic photo on Facebook with a fantastic commentary:

In 480 BC, the Persian king Xerxes demanded that the Spartans give up their weapons. King Leonidas responded with the…

In 480 BC, the Persian king Xerxes demanded that the Spartans give up their weapons. King Leonidas responded with the phrase ΜΟΛΩΝ ΛΑΒΕ (molon labe) which meant “Come and take them.” This led to the Battle of Thermopylae, in which a small group of Greek warriors held off a far superior group of Persians for three days.

Similarly, in 1831, the Mexican army gave a small piece of field artillery to settlers in Gonzales, Texas, to help them fend off Indian attacks. At the onset of the Texas Revolution, the Mexican army asked for the cannon back. In response, the settlers raised a homemade flag with an image of the weapon and the words “Come and Take It” emblazoned across it.

The twin phrases “ΜΟΛΩΝ ΛΑΒΕ/molon labe” and “Come and Take It” have become synonymous with the promotion of the Second Amendment and other fundamental liberties. They are antithetical to the idea of unilateral disarmament.

Today, snowflakes across the country walked out of class to protest “gun violence” and demand new confiscatory gun laws. The poorly informed young woman in the photo was part of today’s Tide Pod Walkout. Note the slogan (and date) on her shirt, and the protest sign in her hands.

Seriously–this is the most ironic photo I’ve seen in a long time.

This just goes to show you that we need to be teaching our kids history instead of activism.

We need to do better — for the sake of our kids.