Simmons college wrote a list. Many previously ‘acceptable’ words are on the Orwellian trash heap. Including ‘Islamophobia’ and ‘God Bless You’.

The Media (D) better pivot quickly, or they’ll be using ‘microaggressions’ in their bogus claims about bigotry on the right.

And that is exactly why we never take them seriously.

Scratch that. We never take their claims of bigotry seriously. (We’ve seen how fake they are for far too long.) But the effects on public opinion that come from making those claims relentlessly are another question entirely.

If you say God Bless you, you’re an anti-Islamic bigot, you oppressor!

If you say that the guy who said ‘God Bless You’ is Islamophobic, you’re wrong too. (In that you’re using outdated and oppressive language.) Don’t confuse ‘hate’ with a medical condition.

When Islamophobia was a comparatively new term on the scene, and those of us they tried to tag with the term were calling bullsh-t for exactly that reason, nobody blinked.

But now? They’re ready to turf the term. No, it hasn’t outlived its usefulness. They’re not discarding their precious anti-free-speech slur. They’re just replacing it with one that’s even MORE Orwellian.

You may be wondering why our guide uses the suffix “misia” instead of the suffix “phobia.” If you’ve not encountered “misia” language before, you may also be wondering what it means. Well never fear! We are more than happy to explain this relatively new shift in language.

The suffix “phobia” comes from the Greek word for “fear of,” and so it denotes an intense aversion to the part of the word that precedes it (e.g. arachnophobia is a fear of spiders). Words like “homophobia” or “Islamophobia” are pretty recognizable, and most folks understand them to mean a position or perspective that is prejudicial and discriminatory against LGBTQIA+ identities and the religion of Islam respectively.

The problem with using “phobia” terms as labels for prejudice is that there are folks who actually have phobias (real anxiety disorders in which someone experiences intense anxiety or fear that they’re unable to control—Claustraphobia, for instance). So when we use terms like “homophobia,” we are equating bigotry with a mental health disorder, which does several problematic things:
Source: Simmons

It goes on from there. It’s not that they misunderstand people who are skeptical of cultural implications of an advance of Islam in nations previously known for liberal rights and pluralism. It’s that its easier to silence critics as speaking ‘hate’ than it is to engage the actual ideas. (See Canada’s new hate speech laws that have special provision for Islamphobia.) 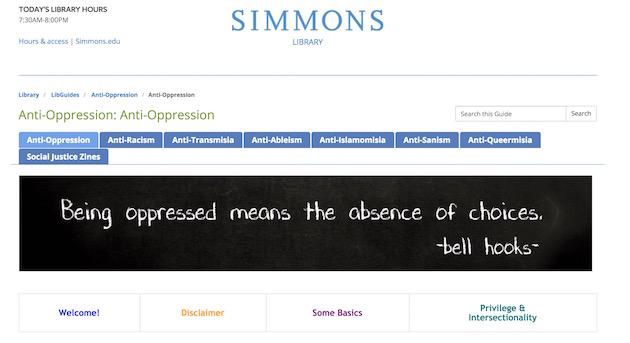 Here is shot of the website. They’ve sorted your free-speech heresies into convenient categories, for your convenience.

What message are they putting forward? It’s not hard to figure out. Here’s another screenshot. 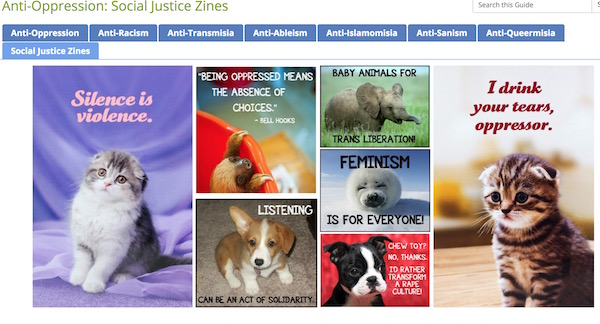 Oppose free speech and critical thinking. Make it harder and harder to criticise of the elite… at least, the ones who have drunk the Kool-Aid.

What could *possibly* go wrong?