Parents are very, very angry. They should be. Here’s the 411.

Bonita High School is a prestigious school in La Verne, California. A student magazine caused outrage because of images accompanying an article titled, ‘Artist and Activist’. One cartoon depicted President Trump as a Nazi, indicated by a swastika hidden under his signature hair. The other was of a police officer wearing a KKK hood along with his uniform as he pointed a gun in the face of a small, innocent-looking black child in a hoodie holding candy — an obvious homage to Trayvon Martin. This one also had an American flag torn in the center revealing a Confederate flag underneath.

One parent told Fox11: ‘I don’t want my son seeing an officer with a KKK hood on pointing a gun at a child’s face.’

He added ‘These kids are so impressionable they take these things at face value- they don’t realize this is just an artist.’

Some students also questioned the appropriateness of the article, titled ‘Artist and Activist.’

‘Everyone has the right to their own opinion at the end of the day, but I feel like in school it should be a place where we don’t have to talk about politics,’ said one unnamed student.

However, another student said, while the article is controversial, it is still part of free speech. 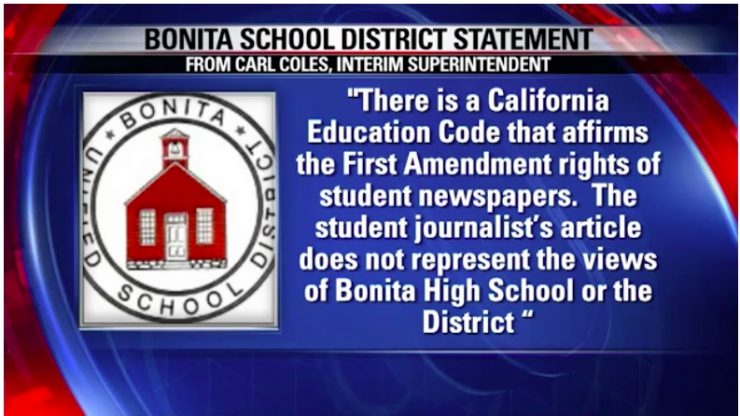 Fox 11 reports that the magazine had other articles tackling such topics as abortion, rape, immigration enforcement, and student walkouts for gun control.

Yes, but does it give a balanced view? Or is it just one point of view — that of the radical left?

Would the magazine even allow the counter-argument to be published?

There was no corresponding right-wing activist artwork in the article.

One former student posted his frustration with this overt propaganda on Facebook:

I was proud to be from Bonita.. not after seeing this, them pushing politics in school, brainwashing the kids, and supporting female activist in a high school magazine… Shame on the city of la Verne and Bonita high school.. for allowing this propaganda in our schools.. time for us citizens to fight back Mr Mayor Don N Gaynel Kendrick time for the citizens of la Verne to put a end to this bullshit you guys are allowing in the schools..

I was proud to be from Bonita.. not after seeing this, them pushing politics in school, brainwashing the kids, and…

First, I would like to thank everyone for your interest in this topic. Yes, I was furious when I first learned about this and I am still concerned. But I have had discussions with a number of people and would like to share those with you. I would like to address two issues. One, the incident, and the other, the clubs at Bonita High School. First the incident. As most of you know, the city of La Verne Police Department has a very good, if not excellent, relationship with our school district, and especially Bonita High School, with a police officer assigned to the La Verne schools as a School Resource officer. This is a relationship that has been ongoing for over 25 years. This unfortunate incident with the school newspaper has turned out to be a very bad judgment call by a new teacher, not an example of what normally goes on at the school. One Bonita teacher went to the police station on his own, talked to the Chief of Police, and apologized on behalf of what he said was 99.9% of the teachers at the school. Further, the Superintendent of Bonita Unified School District and the Principal of Bonita High School also went to the police station, met with the Chief, and apologized. Mistakes are made. The Police Department is fully committed to working with everyone in the school district, including the students, to make our community the best it can be. The Chief said it was an unfortunate mistake, but should not be used to judge the school district or the relationship that exists with the police department, and one that will continue to exist. The second topic is the Bonita High School clubs. Did you know that there were over 60 clubs on the campus? Why so many? Because there is a wide variety of interests among the students. There is a club for everything you can think of, and even a club if there is no other club to belong to. Engaged students, doing things they like, leave little time to become engaged in destructive activities like we have recently witnessed in Florida. Every student at Bonita High School is expected to be engaged and involved in something. We are a better community when they are.
Thank you for your time.

The Mayor says that this was just a ‘bad judgment call’ by a new teacher. It is unknown if any reprimand on said teacher has occurred.

All online copy of the magazine has been taken down and the physical copies on campus have been pulled.

What do you think of this school magazine?