In an election year, their voluntary participation is mandatory. There’s a head-count, after all!

If any of you still really believe this was a student-led protest based on passionate feelings about a cause, keep reading. Jacob’s ‘free expression’ came with a consequence. Because his was not the ‘right’ free expression.

This Walkout is less like the Chinese students rising up for freedom in Tiananmen Square (where 10,000 students reportedly DIED seeking freedom) and more like a scene from that Clinton-era movie “Wag The Dog”.

Kids are being used as pawns by the hard political left who have made it very clear that they are willing to use anyone and anything as a tool in the #Resistance effort to undermine and preferably overthrow the duly-elected Republican presidential candidate.

Oh no! How DARE the American public fail to vote for the person whose candidacy all these rich, powerful lobby groups on the left (media included) worked so hard to orchestrate? Somebody stop them!

The Women’s march created a good system of organizing people, but nobody listened to it. Let’s use that same infrastructure to turn the kids into a cause. Because only a monster would disagree with kids, right?

Brilliant Machiavellian plan. One problem, though.

What happens if the kids disagree with the cause?

An Ohio high school student said he tried to stay apolitical during the National Walkout Day over gun violence but was suspended for his choice to remain in a classroom instead of joining protests or the alternative, going to study hall.

Jacob Shoemaker, a senior at Hilliard Davidson High School, said he didn’t want to take sides in the gun-control debate consuming the country. If he went outside for the walkout, he said, he would be supporting gun control. If he stayed in the common area of the school, he said, he would be seen as supporting gun violence and disrespecting the 17 lives lost in the Parkland, Fla. High school shooting the month before.

Jacob had met with the school’s principal on Tuesday, a day before the rally, for about an hour to find out what exactly the walkout was supporting. But he said the principal reportedly told him it was for the “students to express themselves.”
Source: FoxNews

This put him in the position of either supporting gun control or becoming a social pariah for disrespecting the lives of dead students. Neither was an acceptable option to him.

While everyone else left, he stayed in class and worked on homework.

Aaaaaand here is the suspension he got for the sin of being apolitical. 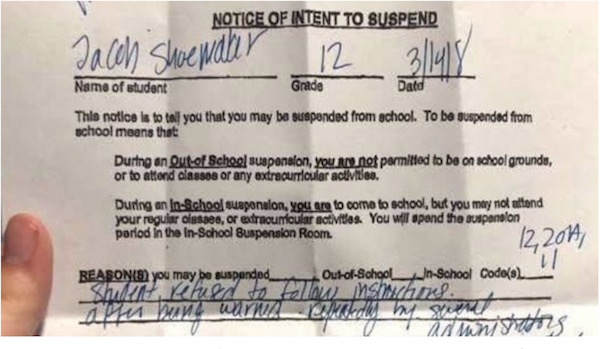 In case you’re reading this on a smaller screen, the handwritten reason given at the bottom says:

“Student refused to follow instructions after being warned repeatedly by several administrators.”

Three things stand out about this.

First, SOMEONE really SHOULD be suspended here, but it isn’t the student.

Second, it’s time to bring that voucher system online so that students can vote with their feet against schools that put their political or union interests ahead of the rights or education of their students.

Third, that the Second Amendment rights this protest sought to infringe are for precisely the sort of bullying, authoritarian government overreach that this attitude shows the early symptoms of normalizing.