Here’s the 411 on the President’s reversal on the Obama-era decision.

First, we need to get a little background info.

1. The decision to allow transgender individuals to openly serve in the military came into effect in June 2016.

Barry, an activist for the LGBT community, thought that integrating transgender troops was so vital for LGBT rights that he waited until the tail end of his second term to allow it.

And that’s part of what this was. Transgender activists cited the decision to include gender dysphoric individuals as a way to normalize and create an environment of acceptance of transgenderism in the broader community.

Transgenderism had been banned in the U.S. military since the 1963 Army Regulation 40–501 at ¶ 6–32(b) which stated, ‘behavior disorders[] as evidenced by … transvestism.’

In other words, it had been classified as a behavioral disorder.

The July 2, 2012 Defense Department Instruction on ‘Medical Standards for Appointment, Enlistment, or Induction in the Military Services’ states that candidates for military service shall not have ‘[c]urrent or history of psychosexual conditions, including but not limited to transsexualism, exhibitionism, transvestism, voyeurism, and other paraphilias’.

2. President Obama was an activist for the LGBT agenda.

It appeared that he may have made decisions emotionally without full consideration of facts. Some major questions weren’t even answered when he made the decision that he left his successor to deal with.

President Obama’s historic steps — or in some cases, shoves — toward fuller LGBT equality in America have been well-documented, ranging from symbolic nods of approval to concrete and transformative policy prescriptions. In 2009, he signed into law the first federal protections based on gender identity or sexual orientation with the Matthew Shepard and James Byrd, Jr. Hate Crimes Prevention Act. A year later, he enacted a measure repealing the military’s ban on openly gay service members, known as “don’t ask, don’t tell.”…

…Unlike “don’t ask, don’t tell,” which required congressional approval both to become law and to be repealed, the transgender policy was never a statutory bar; that meant that ending it required only the direction of the defense secretary and the president…

…LGBT advocates are still anxiously awaiting all of the specifics on how the transgender policy will actually change, particularly when it comes to rules governing barracks, sex reassignment surgery, new recruits, and more.
Source: NBC

The estimates of the number of transgender servicemembers were by a left-leaning think tank the Williams Institute, which determined that as many as 7,300 biological males and 1,500 biological females were, in fact, active transgender troops.

There was no discussion of the potentially astronomical costs related to the medical needs of transgender servicemembers.

The Family Research Council (FRC) estimates the cost at somewhere between $1.9 to $3.7 Billion over 10 years when time lost and replacement troops are included in the calculations.

The FRC document also considered that transgender individuals would require ‘specialized treatment’ that may not be available in some areas of the world that they would be deployed.

The statistics on gender transition was also biased, as the costs associated was based on the presumption that very few gender dysphoric individuals make the full transition to the preferred gender. This is likely attributed to the high cost of surgery that is not covered under many healthcare insurance plans, nor did it include the cost of the hormone therapy that would be required for the rest of their lives. A study by the National Transgender Discrimination Survey has indicated that given the option to fully transition, the vast majority would do so. 82 percent of biological males who identify as female and 64 percent of biological females who identify as male would opt for surgery.

With health care coverage through the government, and transgenderism removed as a ‘behavioral disorder’, the surgical transition for active servicemembers would likely be fully covered by taxpayers.

4. President Trump had promised to reverse the Obama era decision.

Donald Trump has fulfilled his promise to ban transgender people from serving in the military.

The White House released a memo on Friday evening stating that transgender people are now ‘disqualified from military service except under limited circumstances.’

The ban is due to take effect immediately despite multiple federal courts issuing rulings blocking Trump´s ban. The judges said the ban would likely violate the right under the U.S. Constitution to equal protection under the law.

5. The new memo released on Friday revokes the August 25, 2017 memo and limits the service of transgender individuals.

Here is the memo: 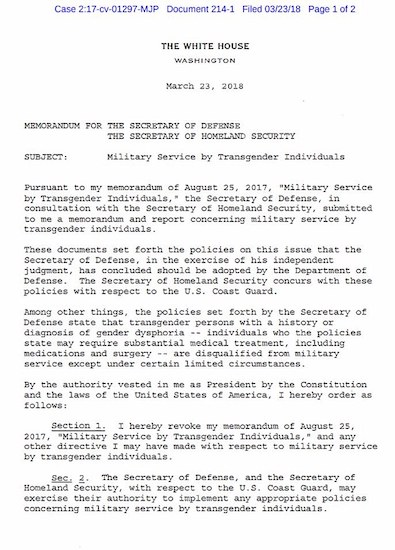 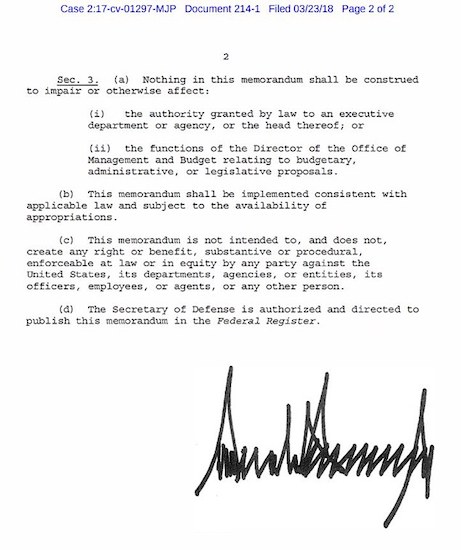 Among other things, the policies set forth by the Secretary of Defense state that transgender persons with a history or diagnosis of gender dysphoria — individuals who the policies state may require substantial medical treatment, including medications and surgery — are disqualified from military service except under certain limited circumstances.

Section 1. I hereby revoke my memoranda of August 25, 2017, “Military Service by Transgender Individuals,” and any other directive I may have  made with respect to military service by transgender individuals.

Sec. 2. The Secretary of Defense, and the Secretary of Homeland Security, with resepect to the U.S. Coast Guard, may exercise their authority to implement any appropriate policies concerning military service by transgender individuals.

The President has stood by the decision that was denounced when he tweeted it out in July of last year citing that there would be ‘considerable risk to military effectiveness and lethality’ to allow individuals requiring ‘substantial medical treatment’ to serve.

The new memo, however, puts the onus on the Secretary of Defense and the Secretary of Homeland Security to put in place whatever policies they see fit regarding transgender individuals serving in the armed forces.

Trump said on Twitter at the time that the military ‘cannot be burdened with the tremendous medical costs and disruption that transgender in the military would entail.’…

…the White House says retaining troops with a history or diagnosis of ‘gender dysphoria’ – those who may require substantial medical treatment – ‘presents considerable risk to military effectiveness and lethality.’

However, the ban has faced several legal challenges. Federal judges – in Baltimore, Washington, Seattle and Riverside, California – all issued rulings blocking Trump´s ban. The judges said the ban would likely violate the right under the U.S. Constitution to equal protection under the law.

And, when the January 1 deadline passed, the Pentagon had to begin allowing transgender recruits to seek enlistment.

At least one, openly transgender recruit immediately signed a contract to join the U.S. military, and officials admit they have no numbers on how many transgender people have enlisted since that date.

There are also believed to be hundreds of transgender individuals who have come out and been serving openly since Obama’s 2016 announcement.
Source: Daily Mail

7. Celebs and activists are tweeting that it’s ‘hateful’, ‘unpatriotic’, and ‘transphobic’. 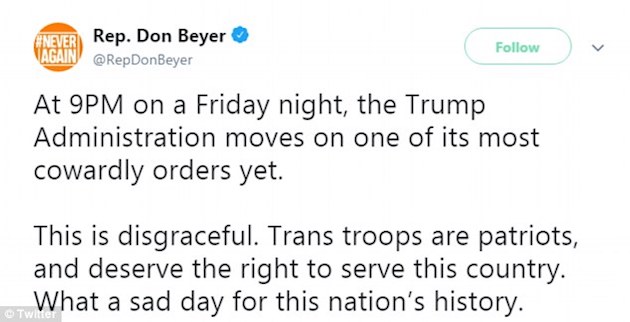 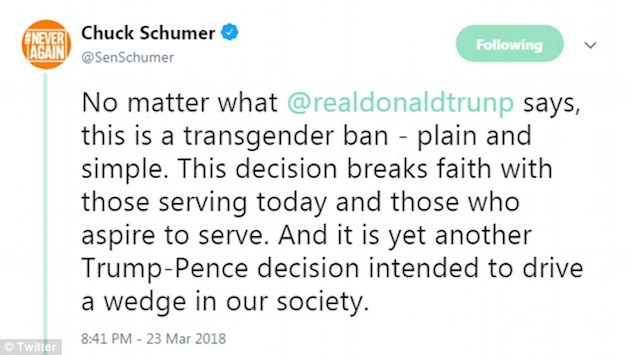 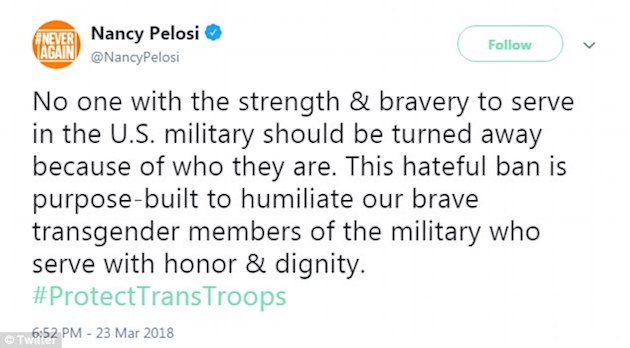 What do you think of the President’s position?