Between this and the flushed hamster, how long will it be before PETA starts protesting airlines?

If she’d argued with the flight attendant she’d get thrown off the plane.

Flight attendants insisted that the 10-month-old French bulldog puppy be stowed in the overhead compartment.

It was a three-hour flight. They said it ‘wouldn’t be a problem’. 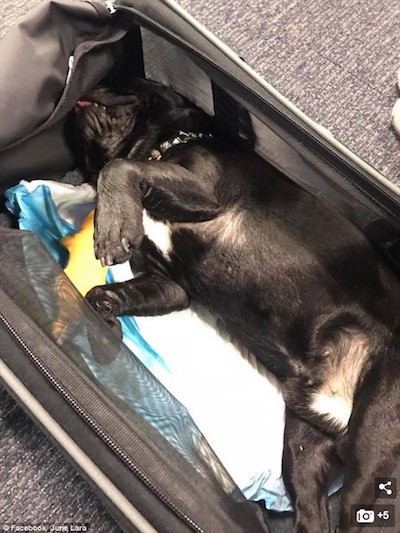 They were DEAD wrong.

‘The flight attendants of flight UA1284 felt that the innocent animal was better off crammed inside the overhead container without air and water,’ he wrote on Facebook.

‘They INSISTED that the puppy be locked up for three hours without any kind of airflow. They assured the safety of the family’s pet so wearily, the mother agreed.’

Lara said that when the plane eventually landed three hours later and the owner, who was with her two young children, opened the overheard luggage, the dog was dead.

‘There was no sound as we landed and opened his kennel,’ he wrote. ‘I held her baby as the mother attempted to resuscitate their 10 month old puppy.

‘I cried with them three minutes later as she sobbed over his lifeless body. My heart broke with theirs as I realized he was gone.’
Source: DailyMail

Another passenger published his FB description of the events. 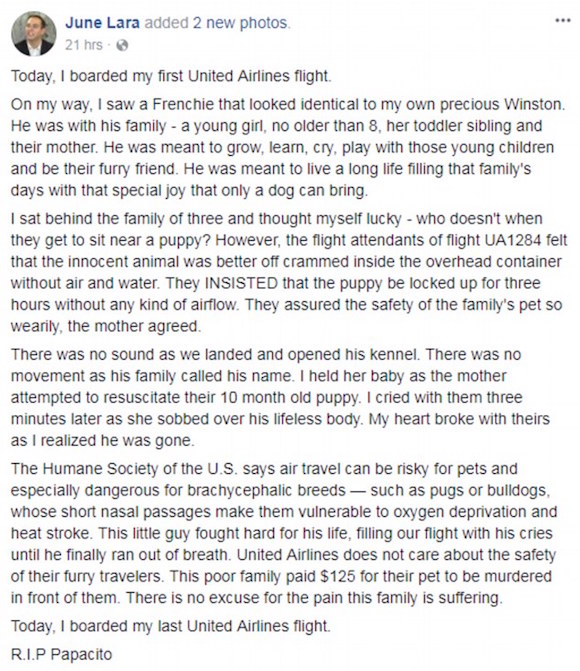 This story is heart-rending.

This story is enraging.

But above all, this story is inexcusable.