Tucker Carlson had NYU Marketing professor, Scott Galloway, on his show to discuss a recent article that he had written for Esquire Magazine. In his article titled, SILICON VALLEY’S TAX-AVOIDING, JOB-KILLING, SOUL-SUCKING MACHINE, Galloway wrote that Amazon, Apple, Facebook, and Google wield too much power in our modern smartphone-connected world and they need to be broken up.

They wield that power because they want control.

It’s no secret that people are addicted to their smartphones and loving the new everything-at-your-fingertips instant-access to information.

But tech giants are exploiting the control that they have over you — even if you don’t have a Facebook account, they track your online presence through third-party information gathering.

They even want control over your Newsfeed. Don’t let them have it.

Galloway explained to Carlson that although he doesn’t believe that the companies have done anything wrong per se. He says that they are, in fact, a net benefit to the consumer, but they are stifling smaller companies from growth that would maximize the benefits to consumers.

In the case of Facebook, you have two companies that control almost all traffic and all e-commerce and your presence on the web. And so, if it’s not a monopoly, it’s a monopsony, and advertisers have no choice. So there’s too much power in the hands of these companies. I don’t think they’re evil. I don’t think they have done anything wrong. I think they do what companies are supposed to do. They’re growing their earnings. But I think at some point, referees need to step in, throw a yellow flag. And I believe these companies would be better for the economy — a broader tax base, more jobs. Maybe fewer billionaires, but more millionaires if there were 11 or 12 companies instead of the four we’re discussing today.

Galloway uses an illustration that shows how what he calls ‘The Four’ use our own humanity against us to maximize profit. He expounds on this idea in the lengthy article, but here is the basic idea: 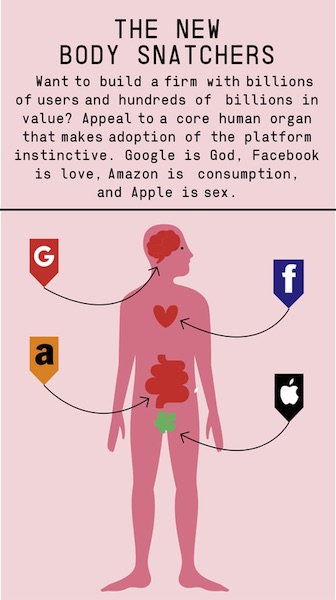 Big tech learned from the sins of the original gangster, Microsoft. The colossus at times appeared to feel it was above trafficking in PR campaigns and lobbyists to soften its image among the public and regulators. In contrast, the Four promote an image of youth and idealism, coupled with evangelizing the world-saving potential of technology.

The sentiment is sincere, but mostly canny. By appealing to something loftier than mere profit, the Four are able to satisfy a growing demand among employees for so-called purpose-driven firms. Big tech’s tinkerer- in-the-garage mythology taps into an old American reverence for science and engineering, one that dates back to the Manhattan Project and the Apollo program. Best of all, the companies’ vague, high-minded pronouncements—“Think Different,” “Don’t Be Evil”—provide the ultimate illusion.
Source: Esquire

We know that Google buried the ‘Clinton Body Count’ search results and that Facebook, Twitter, and YouTube, which is owned by Google, routinely censors and/or demonetizes conservative and Christian posts on their respective platforms.

Fauci’s Net Worth May SHOCK You
The Black Sphere