Edward Snowden is still a whistleblower. He’s just shared a video that is going to really anger one particular social media giant…

We’ve been covering how the Social Network has been gathering your information and using it for their own gains. (See below)

Clash Quiz: Were The ‘Favors’ This Social Media Giant Did For Obama A Violation Of Federal Law?

The problem is that this was well known years ago, but the Media (D) was fawning over Barry’s ‘smart’ use of Social Media but now they find it insidious because a Republican dared use the information.

What about all the rest of us that think this is both incredibly disturbing and unbelievably creepy and don’t want anyone using our information without permission?

Well, that doesn’t matter because… ‘TRUMP!’

You know, one has to wonder if there was indeed ‘Madam President Pantsuit’, would any of this have come to light?

The anti-Trump hysteria is actually doing some good, it seems. It’s just not in the way that they intended.

Edward Snowden, the NSA whistleblower, posted a video on Twitter of Mark Zuckerberg speaking with BBC journalist Laura Trevelyan regarding Facebook’s use of data and it’s damning.

That is the impression Facebook CEO Mark Zuckerberg was keen to give during a 2009 interview, but events in recent weeks suggest that was not the whole story.

Video footage of the conversation was posted to Twitter by NSA whistleblower Edward Snowden in the wake of the Cambridge Analytica scandal.

This information was used to target voters in the US, based on psychological profiling, with political adverts spreading disinformation.

Facebook is also facing criticism for collecting years of data on call and text histories from Android users.

The Cambridge Analytica scandal is even starting to hit Facebook’s bottom line:

BREAKING: Look Who’s Getting Investigated By The FTC – Knocking Billions Off Their Value

People didn’t agree to, or completely understand how Facebook was going to use their personal information.

Watch this 2009 interview on the BBC posted by Snowden:

Please help this 2009 interview of Facebook's CEO get seen by people who don't use Twitter. Here's a download link so you can pull and repost it: https://t.co/c32DmpVIig pic.twitter.com/quERsO5WZi

Here is the transcript, you know, in case something ‘happens’ to it.

TREVELYAN: So who is going to own the Facebook content, the person who puts it there, or you?

TREVELYAN: And you won’t sell it?

ZUCKERBERG: No, of course not.

TREVELYAN: Just to be clear, you’re not going to sell, or share, any of the information on Facebook?

ZUCKERBERG: We’re not going to share people’s information except for with the people that they’ve asked for it to be shared. 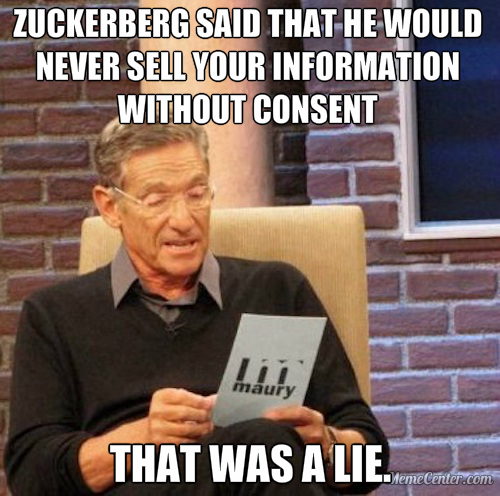 Check out — and then ‘Share’ — these really, really important related articles:

Here’s How To See How Much Data – Calls, Texts, Ads, Convos – FB Has On You

Brace Yourself: Here’s All The Data Big Tech Has On You