Ace sized up the Ingraham/Hogg boycott issue and they picked a side. Was it the right or wrong choice?

With the news moving so quickly, it already seems so long ago. Do you remember that boycott David Hogg tried to hammer Laura Ingraham with?

Fox News Made Its Choice Between Laura Ingraham & Hogg – Are You Surprised?

Ace Hardware was one of the many, many advertisers that caved to the political pressure that was supposedly David Hogg but was, in reality, the large network of backers using him as their political mouthpiece. Or, if you prefer, political cudgel, to silence dissent.

For a while, it was working. Her advertisers scattered like sheep.

But the My Pillow guy stuck around.

And now, after some reflection, Ace Hardware has made an announcement about the future or their relationship with Laura.

Advertising on any network or show, is in no way an endorsement from Ace of the content contained or spoken within that program,’ the Ace spokeswoman said in a statement.

‘We appreciate the different points of view from our customers, and believe people should be treated with respect and civility… At this time, we have not altered our current media schedule.’

This differed from the company’s original statement which said: ‘I can confirm that we do not have any plans to nationally advertise on Ingraham’s show in the future.’

It was made by the same spokesperson who later said the store was continuing its advertising.

This announcement marks the first time any of the advertisers have backed out of their agreement to not work with the Fox News show.

Ingraham showed appreciation for the hardware store by tweeting that she will be ‘buying a wheel barrow and other gardening tools at Ace Hardware this weekend’.
Source: DailyMail

As for the social media thugs? Well, they showed their usual grace and class. 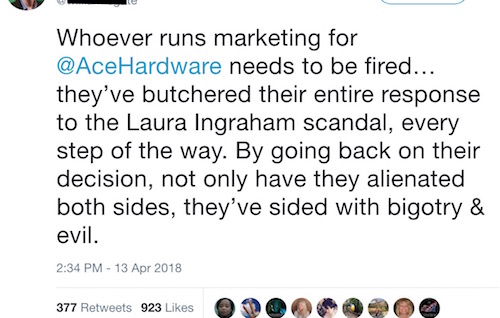 ‘Shut up, they explained.’

Yep. Someone needs to lose their livelihood just because they failed to march lockstep with their jackboot idea of what ‘must’ be believed.

What’s next? How far are they willing to take this?

Throwing dissenters to lions? Burning them at the stake? Death by guillotine?

Would they even get these historical references?

Ah but there’s an interim step, isn’t there? Silencing dissent. And Doxxing those who step out of line, so the ‘mob’ can do whatever they think best with them.

That moral high ground they are taking is looking more and more like an abyss.