The fascist anti-fascists that believe in reacting to speech they don’t like with violence are back again. And they’ve brought along a big-name ally…

What, was Antifa hibernating over the winter?

Maybe there were no ‘fascists’ that urgently needed protesting.

Perhaps they decided that their activism could wait until the weather was a little more hospitable.

So, it’s time for Protest Season!

They’ve used the ‘hate lists’ posted by the Southern Poverty Law Center (SPLC) to target four Christian conferences on the threat of Islam to Western society.

The hotels slated for the events were flooded with threatening calls, and the organizers voluntarily canceled one of the events following numerous warnings that it would not be safe. A fifth conference in Des Moines, Iowa carried on in defiance, despite leftists showing up to disrupt the proceedings.

So, they didn’t even show up to protest — instead, they were calling and making threats to the hotels.

The conferences were hosted by Worldview Weekend, a conservative Christian organization that produces radio and TV shows and sponsors events nationwide. The SPLC posted the locations for these venues, after which Antifa groups urged their members through social media to attend events and swamp the venues with threatening calls and messages.

According to Worldview CEO Brannon Howse, a state trooper even visited the Minneapolis hotel where an event was planned for Sunday. He said the police were concerned about conference security and the organizer should add more police. With the financial losses from other canceled events, Howse said they could not afford to provide more security than those already hired, and cancelled that last event out of safety concerns.

Antifa thugs thought that they were shutting down ‘hate speech’.

The conferences sought to expose how leftists supported by George Soros, the John Templeton Foundation and other donors are intimidating America into silence by labeling anyone who exposes them as “racists,” “Islamophobes” and “white supremacists.” An event last fall featuring this author and DHS whistleblower Philip Haney was canceled by the venue following a similar campaign from Council on American-Islamic Relations (CAIR) operatives. A second event in Illinois went on despite threatening calls to the organizer, her employer and the event location.

It’s like these conference organizers caught on to the tactics.

Unfortunately, they couldn’t stop the attack.

One of the conference speakers, John Guandolo, is listed on an SPLC list of “anti-Muslim extremists.” Guandolo is president and founder of Understanding the Threat. He is a Naval Academy graduate, a combat veteran Marine officer, a former FBI special agent who created the first government trainings on the Muslim Brotherhood and its U.S. operations, and was recruited by the Department of Defense to provide strategic analysis regarding these threats.

In other words, he is an expert in the Muslim Brotherhood and its operations in the United States.

What could that guy know about the threat of Islam?

According to Guandolo, UTT is the only organization that provides tools for leaders, elected officials and law enforcement to map out and investigate jihadi networks. “I teach and train about the things that energize the jihadis (Sharia), and the networks that support jihad and the jihadis. This is primarily the Muslim Brotherhood, of which CAIR, an unindicted co-conspirator in the Holy Land Foundation terror financing trial, is a prominent part. The Muslims themselves say they are motivated by Sharia (Islamic law),” he said.

Antifa posted their ‘call to action’ on Facebook — and oddly, it wasn’t deemed ‘unsafe to the community’ like Diamond & Silk were. 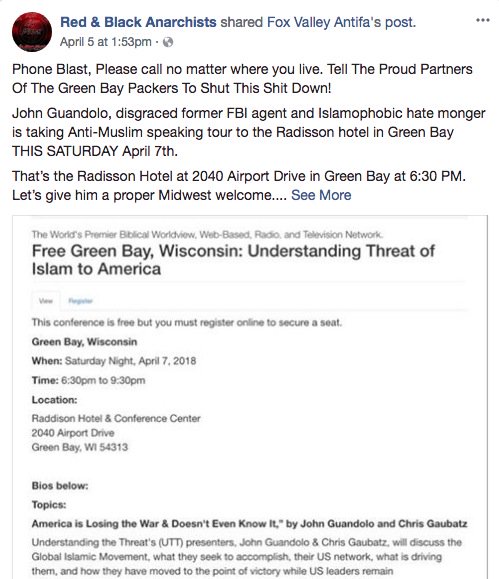 Among other things, protesters claim that Howse is just out to make money. But Howse said events like these cost tens of thousands of dollars to put together, but are free to the public.

“This is a public service provided to American citizens because we are concerned for the future of America,” Howse told The Daily Caller. “We pay the costs for renting the facilities, advertising the events in local markets, printing flyers, bringing in speakers — including airfare, car rental, hotel, speaker fees and other expenses — and charge nothing for the events. We do try to recoup some of these costs through book sales and voluntary donations, but it is never enough.”

Now we know that you have the same aims as the Southern Poverty Law Center and CAIR.