Does Trump need to be considered? After all, Obama got a Peace Prize for what can only be described as “Not Being George W. Bush”.

Before we look at the record of his successor, let’s take a moment to consider the legacy of Obama, who was awarded that prize.

With Gitmo still running, Libya’s government being toppled, accusations of US involvement in a failed coup in Turkey, after Ukraine losing half of Crimea, after Obama cheering the Arab Spring, which elevated some dangerous rogue regimes in the region and with the smoldering ash heap of nations stretching from Iraq to Syria by the time Obama Stepped down, that’s a decision the award committee would probably like to take a Mulligan on.

After all. THIS is the Obama legacy that was seldom discussed by the TV news desks.

The U.S. dropped an average of 72 bombs every day — the equivalent of three an hour — in 2016, according to an analysis of American strikes around the world.

The report from the Council of Foreign Relations comes as Barack Obama finishes up his presidency — one that began with promises to withdraw from international conflicts.

According to the New York City-based think tank, 26,171 bombs were dropped on Iraq, Syria, Afghanistan, Libya, Yemen, Somalia and Pakistan during the year.
Source: NBC News

As one LA Times Headline put it: President Obama, who hoped to sow peace, instead led the nation in war.

In 2014, Obama scoffed that ISIS was a ‘jayvee’ team. When he left office, the map of the Middle East looked like this: 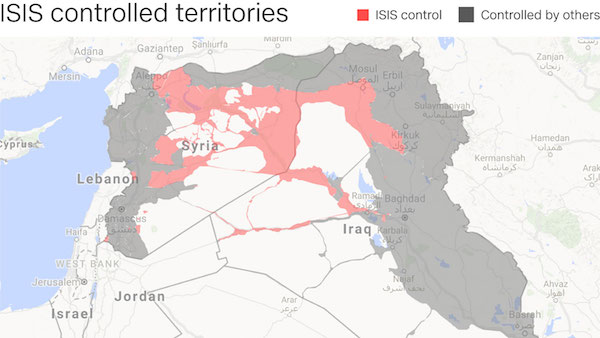 Forces were pushing back against ISIS, but the problem got WAY out of hand before it started getting better.

(and did we mention Obama’s explicit protection of terror group and arms dealer Hezbollah?)

Ok. Somehow, THAT guy managed to score himself a Peace Prize. Go figure.

What about his successor, Donald Trump?

All of Iraq has officially been liberated from ISIS control. It no longer has a claim to a ‘physical state’.

Instead of terrifying images of prisoners (Usually Christian) being set on fire, or ritually slaughtered by the dozens for propaganda purposes, and treating women and girls as slaves to be bought and sold, and violated beyond description, we are now seeing much DIFFERENT – almost comic images.

Even the citizens of Iran have been emboldened enough to protest the burka — however briefly, before the police crackdown.

Russia? They’ve got 200 dead ‘mercenaries’ who got caught up in supporting the wrong people (officially or otherwise) launching attacks against US interests in Syria… with the UK and France on board with it.

They publicly protested but knew they were ‘busted’ when Trump slammed Syria’s chemical weapons with a surgical strike after Syria’s illegal use of poison gas. Russia and Iran could grumble about it, but the facts were lined up against them.

But the big one is what happened with a war so old it could be claiming social security checks.

What may well prove to be the news story of the year is summed up in this single picture. 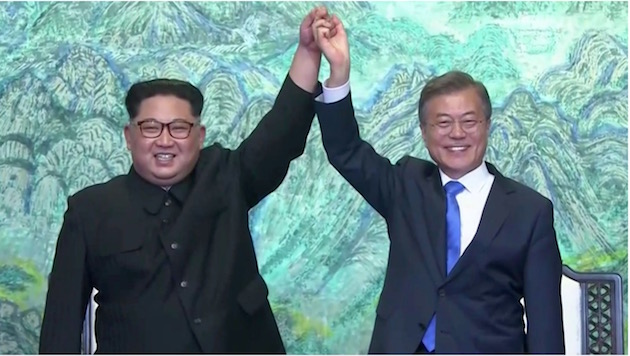 And the phrase ‘complete denuclearization’.

What is most amazing about this story is how quickly it has developed. Just a few short months ago — in January — critics were convinced Trump was going to trigger a Nuclear war.

Joy Behar, of the View, even said she was hoping that the North Korean dictator would be the ‘rational one’ to keep Trump from sending the world down a dangerous road.

That was only a few weeks ago. Look how far we’ve come, and how fast.

This is from a Reuters story quoting South Korean President Moon.

“President Trump should win the Nobel Peace Prize. What we need is only peace,” Moon told a meeting of senior secretaries, according to a presidential Blue House official who briefed media.

Moon and North Korean leader Kim Jong Un on Friday pledged to end hostilities between the two countries and work towards the “complete denuclearization” of the Korean peninsula in the first inter-Korean summit in more than a decade.

Trump is preparing for his own summit with Kim, which he said would take place in the next three to four weeks.
[…]
In January, Moon said Trump “deserves big credit for bringing about the inter-Korean talks. It could be a resulting work of the U.S.-led sanctions and pressure”.

Moon’s Nobel Prize comment came in response to a congratulatory message from Lee Hee-ho, the widow of late South Korean President Kim Dae-jung, in which she said Moon deserved to win the prize in recognition of his efforts, the Blue House official said.

Moon responded by saying Trump should get it.
Source: Reuters

What more evidence would you need that this should be taken seriously?

And what happens to the Left’s ‘Trump is a warmonger’ narrative if he is nominated for a Peace Prize?

Can you imagine how the press would react to news like that?

‘Fainting goats’ might not be far off. (Look it up if you don’t know the reference. It’s hilarious.)

Should Trump Win The Nobel Peace Prize For Getting North & South Korea To Chill Out?